The North of England and Scotland are home to some of the most famous buildings, statues and architectural creations in the UK and in some cases, the world. And whilst people love spending time wandering its cities and counties to take in the delightful views, what if things were a little different? In this series, TransPennine Express has reimagined ten famous buildings and iconic landmarks and questioned what they would be like if designed in the style of some of the world’s pioneering artists and architects.

London isn’t short of famous landmarks, but Tower Bridge is one of the oldest and best. It was built 125 years ago, to ease road traffic whilst maintaining access to the Pool of London docks. With giant moveable roadways that allowed ships to pass, it quickly became an important part of central London infrastructure. In this reimagining, the towers are painted in Picasso’s distinctive abstract style. The bridge’s centre has a fitting tribute to the Union Jack, whilst the suspension is a mixture of blue and orange color blocking. 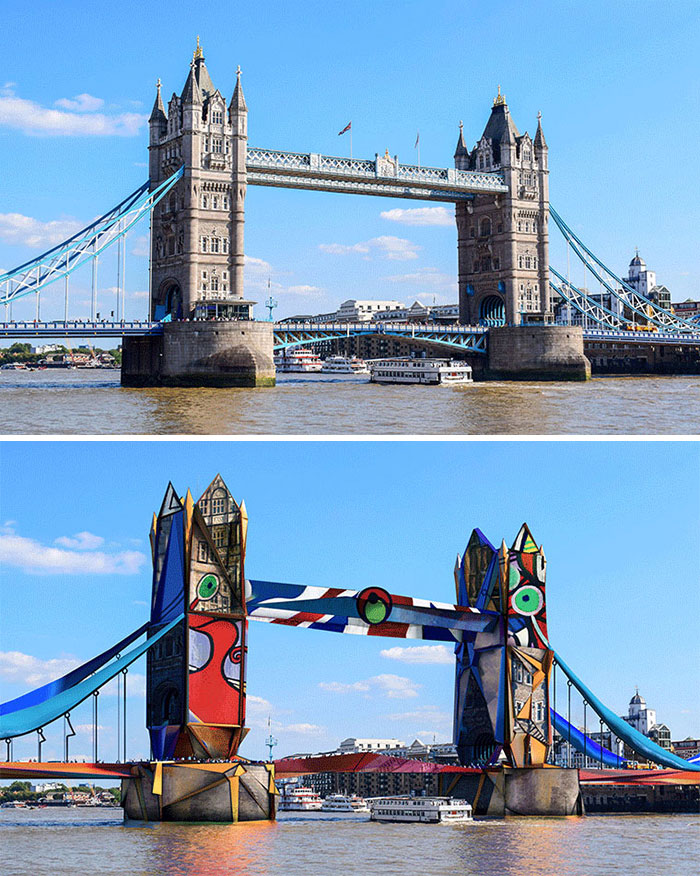 What didn’t Da Vinci do? The Italian was a polymath of the Renaissance era that turned his hand to whatever took his fancy whether drawing, painting, sculpture, architecture, engineering and pretty much everything else. What he didn’t do unfortunately was design the Angel of the North. But what if he did? Well, here’s what it would look like in his individual style. Obsessed with proportions and angles, Da Vinci would bring a more human form to the angel much in the style of his Vitruvian Man. And there’s one thing you can be sure of. Those wings would be perfectly in proportion. 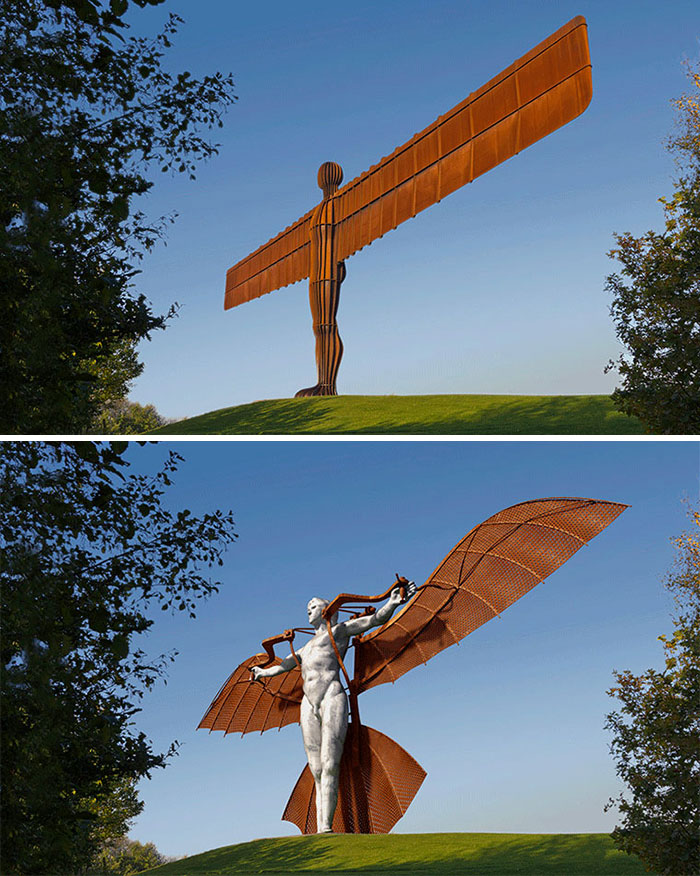 When walking through the streets of Barcelona, it’s impossible to ignore the influence of Antoni Gaudi on the architecture of the city. But what would Edinburgh’s most famous landmark look like if it were designed by the Spanish architect? This re-imagined version showcases Gaudi’s free-flowing style and the influence of nature on his work. Borrowing from his most famous (and yet to be finished) architectural vision, La Sagrada Familia, you can see the gothic influence but presented in a form beyond recognition, in just the way Gaudi always intended. How do you think the Scottish public would take to the new look? 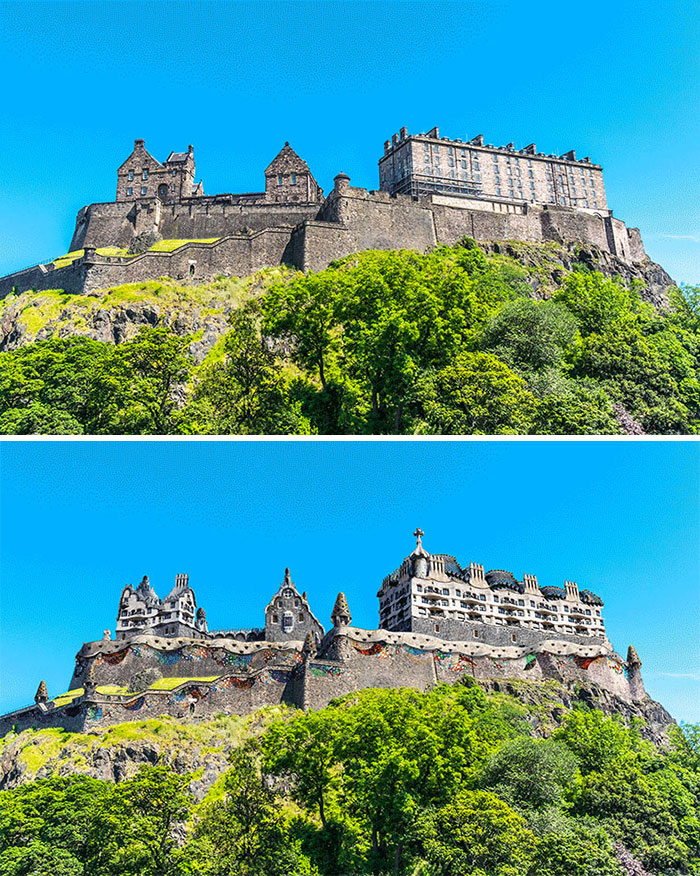 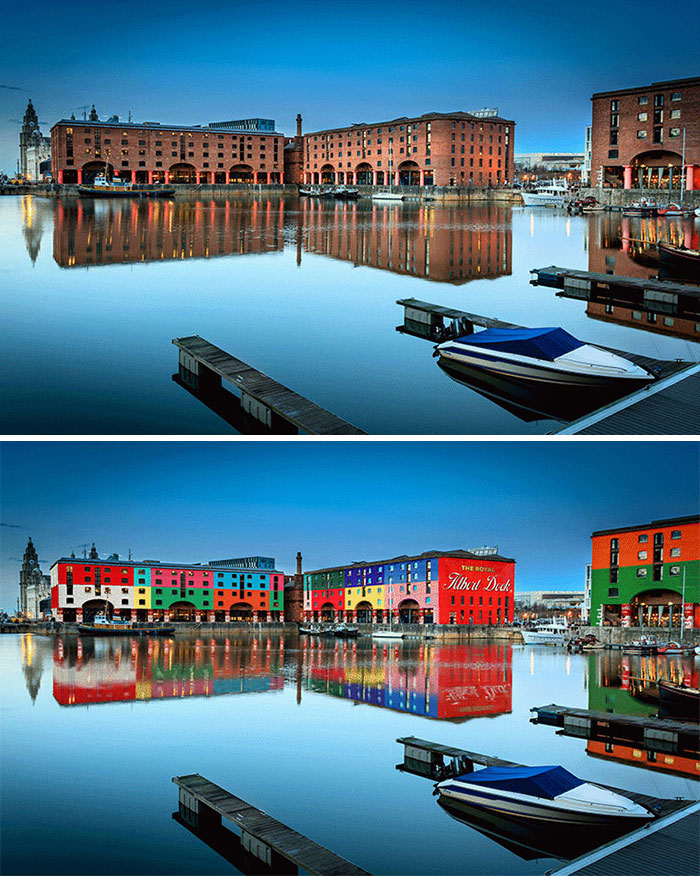 While the Albert Docks has its fair share of modern art within the walls of Tate Liverpool, if the renowned pop art pioneer Andy Warhol would have had his way, the outside walls of Liverpool’s world-famous docks would be adorned with the loudest block colors and vibrant palettes. Warhol’s works explore the relationship between artistic expression, advertising, and celebrity culture, with his most famous pieces including Campbells Soup Cans and Marilyn Diptych. In this re-imagining of the docks in Warhol’s style, Campbell’s-esque lettering comes to the fore as does his signature use of block color and repetition.

If you head to Royal Exchange Square in Glasgow, you’ll find the celebrated Duke of Wellington Statue in all its glory. And if you’re lucky, you might just see it with a small addition from one of the locals. The placing of a traffic cone atop the Duke’s head is a common practice in the city, but imagine if the Surrealist hands of moustachioed marvel Salvador Dali got his hands on it? That’s exactly what we’ve done here. Most-famous for his 1931 painting of melting clocks, the Persistence of Memory, Dali would no doubt go for something a little more outlandish to place on the Duke’s head. And while he’s previously opted for angels riding snails, of course he’d switch out the Duke’s horse for an elephant. 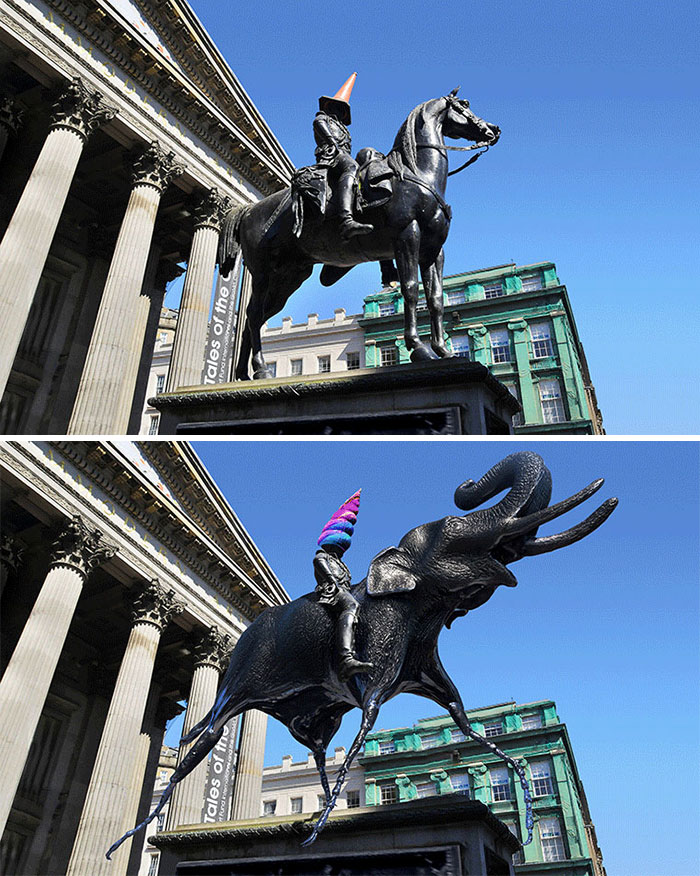 Originally born in Hungary, Marcel Breuer first made his name as a furniture designer, crafting two of the most important chairs ever. But after basing himself in New York, he found his signature architectural style becoming one of the world’s most popular architects in the 20th century. His bold imposing Bauhaus architecture is all about geometric forms, function, and directness. While Leeds Town Hall in its current guise showcases the best of Gothic influences, if Breuer were the architect we would see it take on a much more geometric form in the style of one of his most famous buildings, the Whitney Museum of Modern Art in New York. 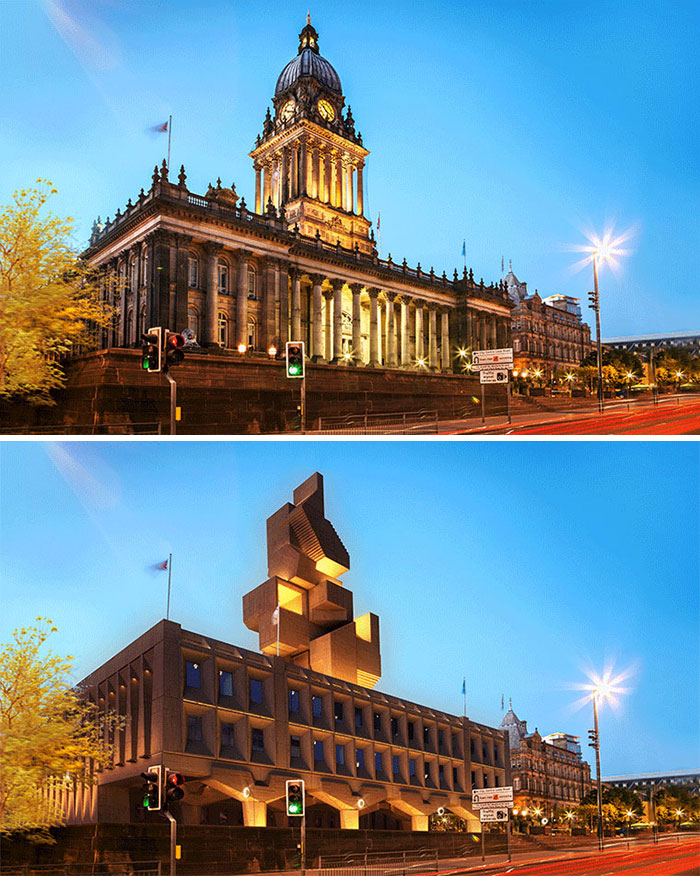 Louis Kahn was one of the greatest American architects of the 20th century. After years in the industry, he finally found his signature style in his 50s, where he combined Modernism with the weight and dignity of ancient monuments. So, whilst the original Gothic style of Durham Cathedral might be more Hogwarts than modern, if Kahn were to design it, he’d be taking things back to ancient citadels with a modern twist. In this re-imagining of the great cathedral, you can see the brickwork combined with triangle and circle shapes made most famous in Kahn’s work including the Indian Institute of Management and National Assembly Building of Bangladesh. 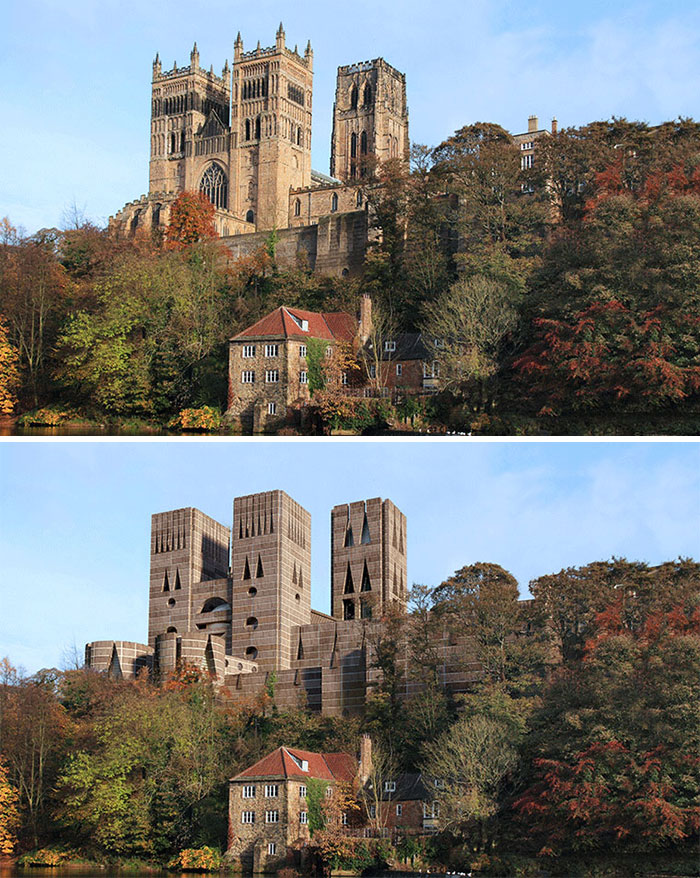 The Russian painter and art theorist, Wassily Kandinsky is credited as being the pioneer of Abstract Art. Kandinsky believed that abstract colors and forms can be used to express the inner life of the artist. And here’s just what the Humber Bridge would look like if it was recreated to showcase the inner-life of Kandinsky. Just a little more abstract that in its current guise, with the bright bold colors inspired by his paintings such as Composition VII and the structure of the bridge’s girders pulled into more abstract lines made famous by Kandinsky in such works as Composition 8. 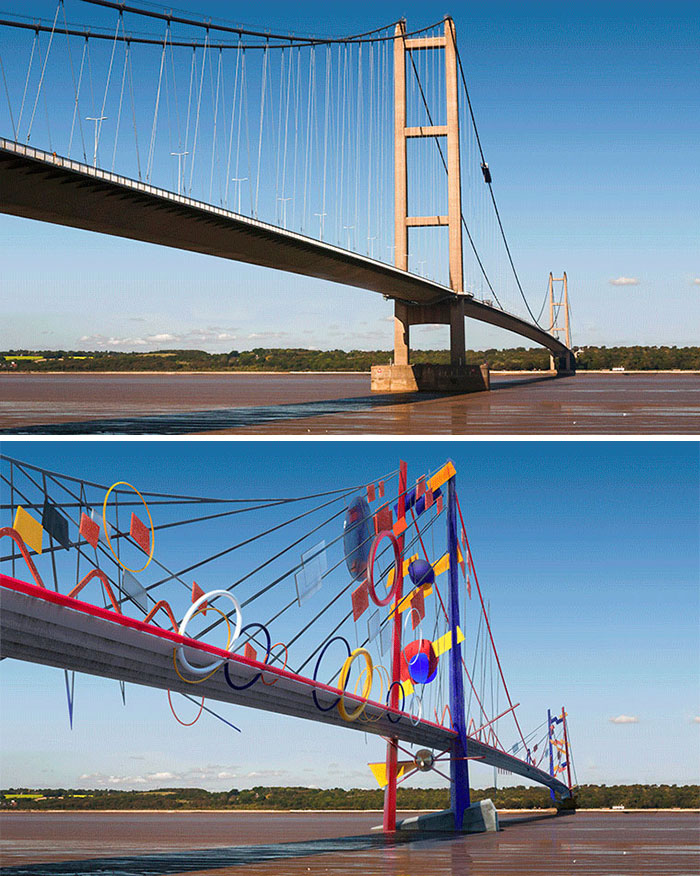 The Bullring in Birmingham is one of the UK’s shopping epicentres, housing internationally renowned brands inside its futuristic walls, which were redeveloped in 2003. But it could have looked quite different if it had been designed in the 1900s – particularly if it had been designed by the painter of the moment, Gustav Klint. Klint’s work was widely known for its symbolist nature, and this reimagining borrows from his ‘Golden Phase’, where much of his work used gold leaf. 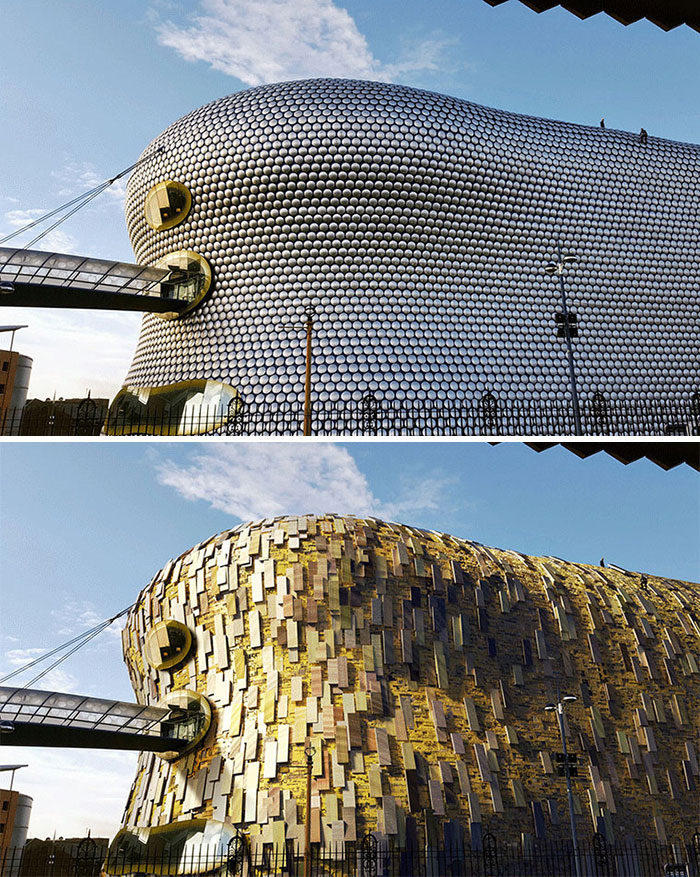 Tower currently stands tall above Manchester city centre shimmering in the sun and reflecting light from its countless glass panels. But not if Modernist Movement pioneer Le Corbusier had turned his hand to the original design. Le Corbusier is famed for his style known as New Brutalism which used rough, heavy forms of stone, concrete, stucco and glass. In this reworking of Beetham Tower in Le Corbusier’s style, you can see his love of block shapes and dashes of color that bring a little brightness to the brutalism. Do we think the residents of Manchester would take to this in the same way they love the iconic Beetham? 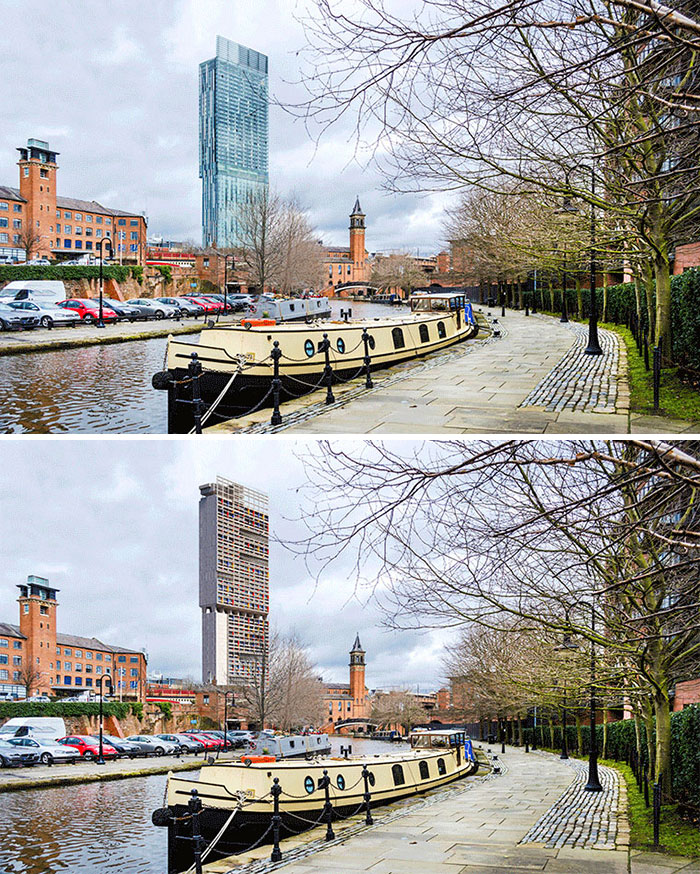