While the ocean is undoubtedly beautiful, it is also incredibly dangerous. It doesn’t matter if you’re a full-time fisherman with years of experience or a novice just starting out; between mechanical failures, unexpected weather, and even sea creatures, sometimes things just go very wrong.

If you were to find yourself stranded in the open ocean, would you know how to survive? If the answer is “no,” you might want to take a lesson from these 20 people. These are the very real stories of lucky souls who set out to sea and survived—in spite of the unthinkable.

1. Louis Jordan: In 2005, Louis’s fishing boat capsized, destroying any means he might have had to call to help. He broke his shoulder, but that didn’t keep him from hanging on for 66 days! He credited rainwater, using his clothes as fishing line, and the power of prayer for his survival.

2. Louis Zamperini: Louis and eight other men were flying for the United States Air Force during World War II when their plane was shot down over the Pacific. Louis survived at sea living on birds and rainwater until he was rescued by the Japanese… only to be made a prisoner of war. He was released in 1945; Angelina Jolie (pictured) went on to direct a film about his story. 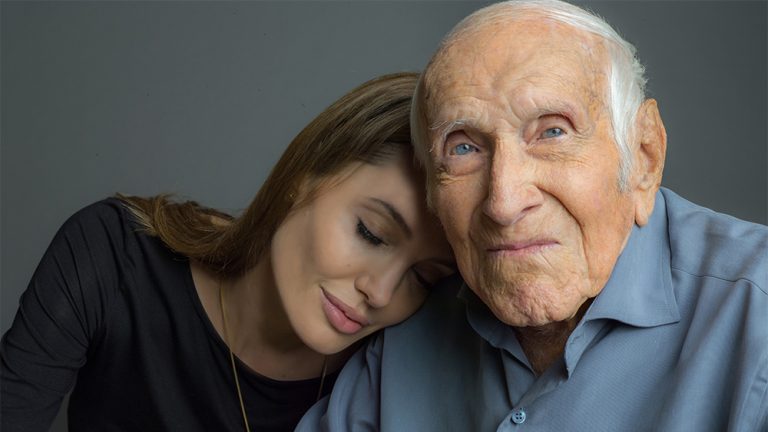 3. Samu Perez, Filo Filo, and Edward Nasau: In 2010, these three Samoan teens set sail from the South Pacific and disappeared soon after. Everyone was so sure they were dead that a funeral was held. Thankfully, 50 days later, they were found and rescued off the coast of Fiji.

4. Harrison Okene: Harrison was using the toilet when his ship sank off the coast of Nigeria in 2013. All the other crew members died, but Harrison survived, trapped in an air pocket. Not a dignified way to survive, but an effective one! 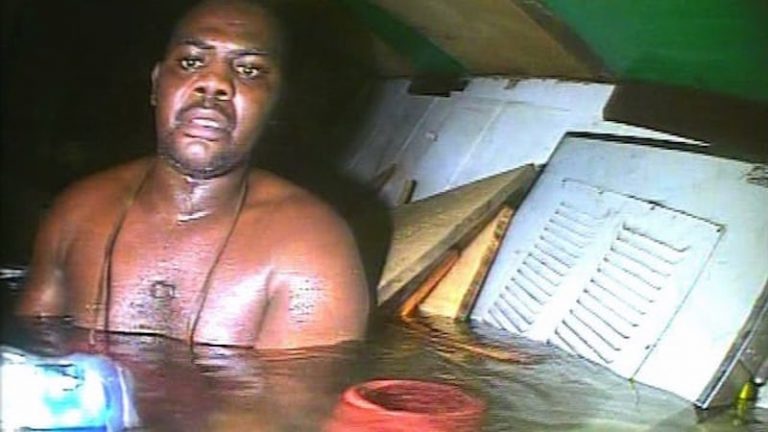 5. Matthew Bryce: This 22-year-old surfer was riding the waves off the Scottish coast in 2017 when he was pulled out 13 miles into the sea. He survived 32 hours thanks to his wetsuit and his surfboard, though he was suffering from severe hypothermia.

6. Steve Callahan: This inventor was attempting to sail across the Atlantic in 1981 when a whale struck his boat, effectively destroying it. He managed to secure a life raft with necessary supplies; he survived basically unharmed for 76 days. 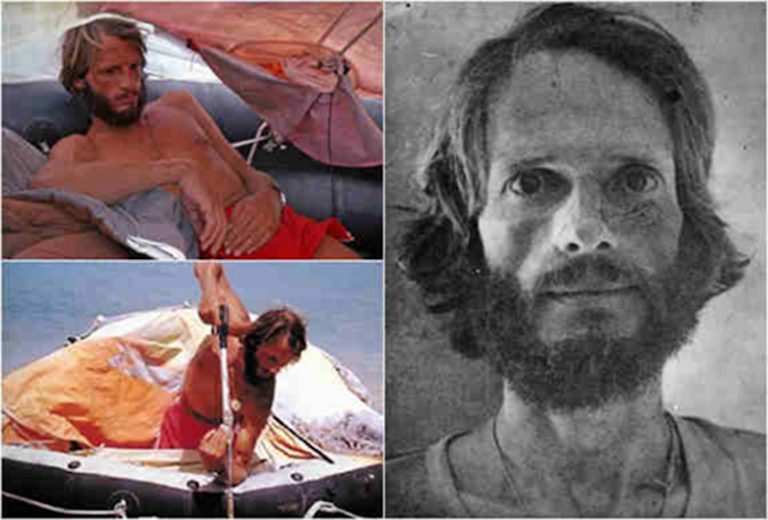 7. William and Simone Butler: In 1989, whales struck again when they attacked this couple’s massive boat. The couple managed to grab a water purifier and a fishing rod before they abandoned ship. Those items kept them alive for a whopping 66 days, despite many shark attacks, until they were found by the Costa Rican coast guard. 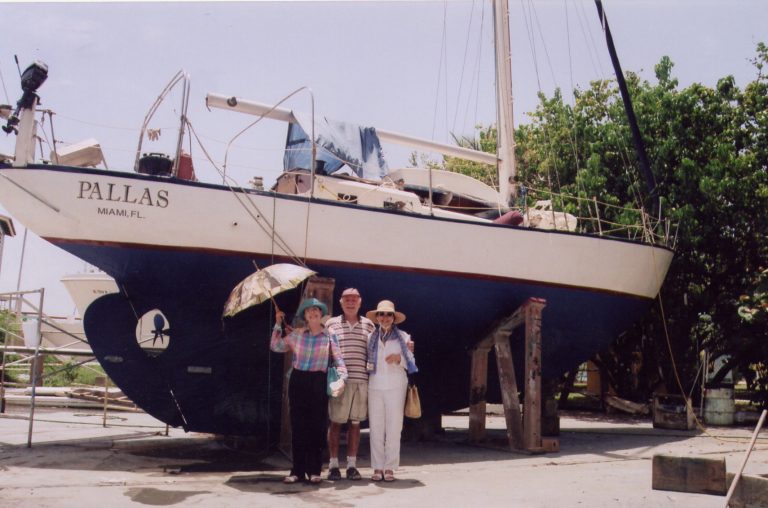 8. Burmese fishermen: In 2009, two fishermen from Burma survived for 25 days after their boat sank off the coast of Australia. They managed to outlast sharks, utter starvation, and terrible conditions, and they did it all from inside a tiny cooler that they used as a lifeboat. 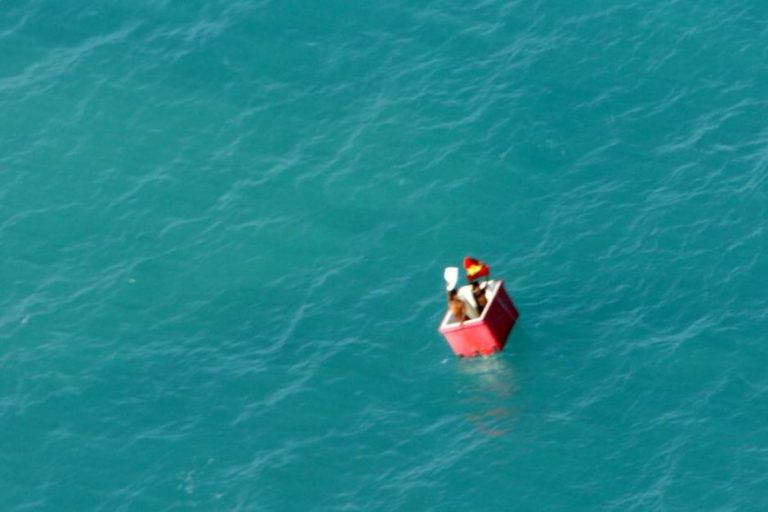 9. Jose Salvador Alvarenga: If Jose’s name rings a bell, that’s because he’s one of the most infamous lost-at-sea survivors—because he was accused of eating his shipmate in order to stay alive for 14 months in 2014. He claimed his fellow fisherman died of starvation and thirst and he only survived by drinking turtle’s blood. Suuuure, Jose. 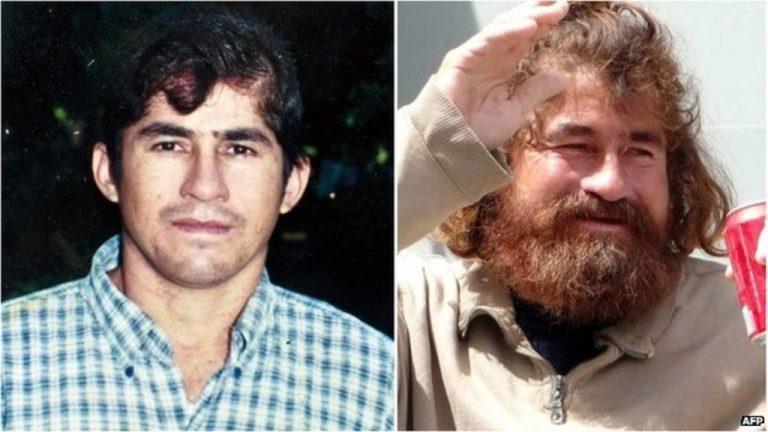 10. Ron Ingraham: This seasoned fisherman is proof that even experienced seafarers can have accidents. On his way to a Hawaiian island in 2014, his boat started taking on water. Everyone believed he drowned, but Ron was found 12 days later—hundreds of miles away. 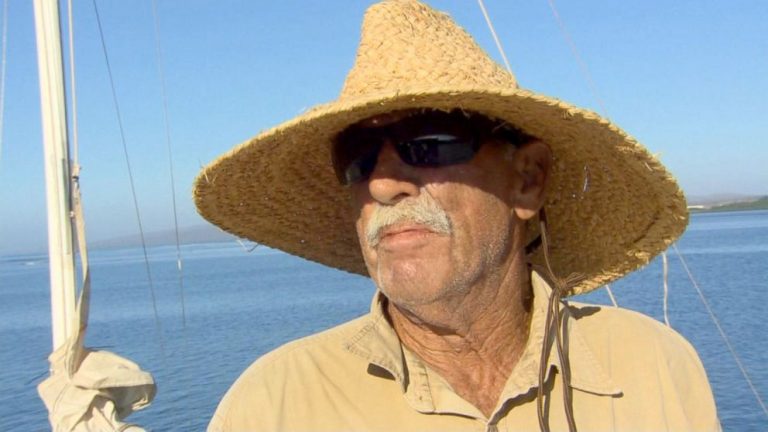 11. Terry Jo Duperrault: Terry Jo was just 11 when she endured the unthinkable in 1961. She’d been vacationing with her family on a chartered boat off the coast of Florida when she awoke to find that the captain had murdered her whole family. He tried to harm her, too, but she escaped using a dinghy. She survived hypothermia and was rescued three days later.

12. Adrian Vasquez: Eighteen-year-old Adrian and two friends decided to go night-fishing off the coast of Panama in 2012 when they lost control of the boat in the strong currents and were swept out to sea. Fishermen near the Galapagos islands spotted Adrian, the sole survivor, 22 days later.

13. Hiromitsu Shinkawa: After a devastating earthquake and tsunami hit Japan in 2011, it wiped out every structure, including Hiromitsu’s home. Miraculously, the 60-year-old man survived by clutching onto a raft made from what used to be his roof. He survived this way for two days before he was finally found. 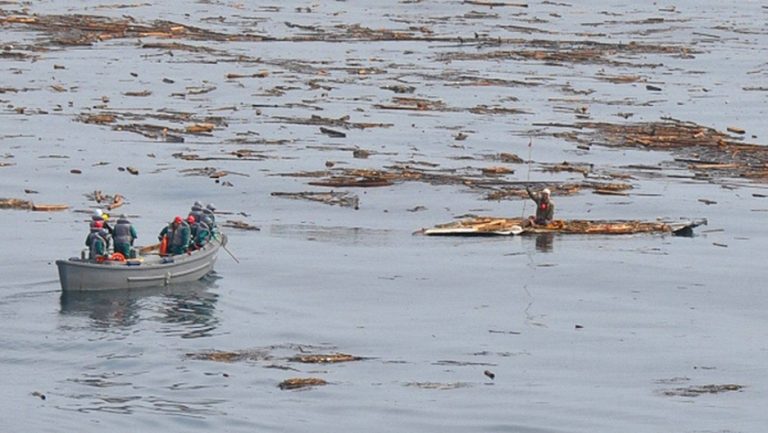 14. Salvador Ordonez, Jesus Vidana, and Lucio Rendon: These three Mexican fishermen set out to hunt for sharks. However, their boat’s engine failed and the men were adrift at sea for nine months before being found in August of 2006 thousands of miles from their home. 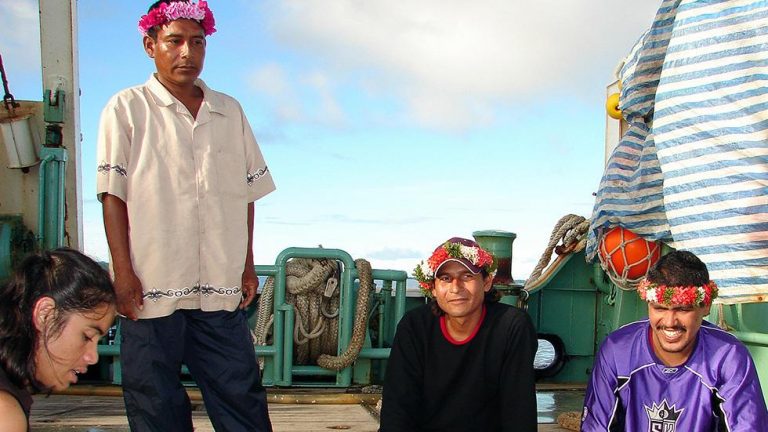 15. Poon Lim: This Chinese sailor set out to sea in 1942 on a giant British merchant vessel. Tragically, the ship was sunk by a Nazi U-boat just three days later. For 123 days, Poon—the ship’s only survivor—did everything he could to make it on his handcrafted raft. 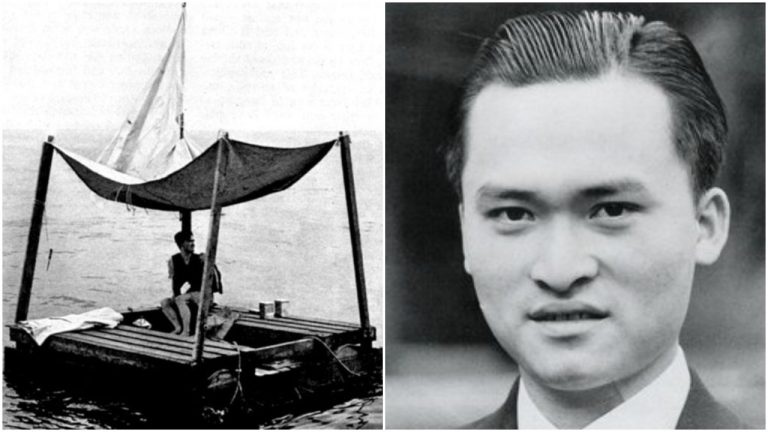 16. Lapahele Sopi and Telea Paa: It was 2001 when these two Samoans survived four months at sea on rainwater and fish. Tragically, their two other companions were not so fortunate; they died of hunger and thirst. A local doctor who treated the survivors said that they were truly proof of miracles. 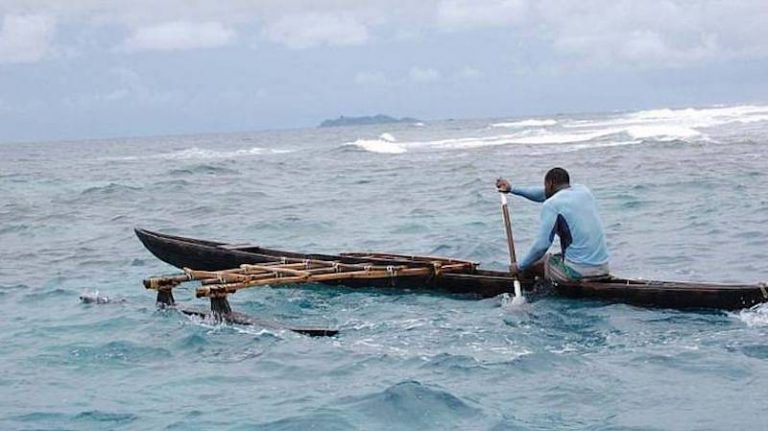 17. Maurice and Maralyn Bailey: In 1973, this British couple was sailing in their yacht off the coast of Central America when whales sunk their boat. They survived for 117 days before being rescued by a South Korean fishing boat. Horrific weather, shark attacks, and malnutrition were just some of the things they were forced to endure. 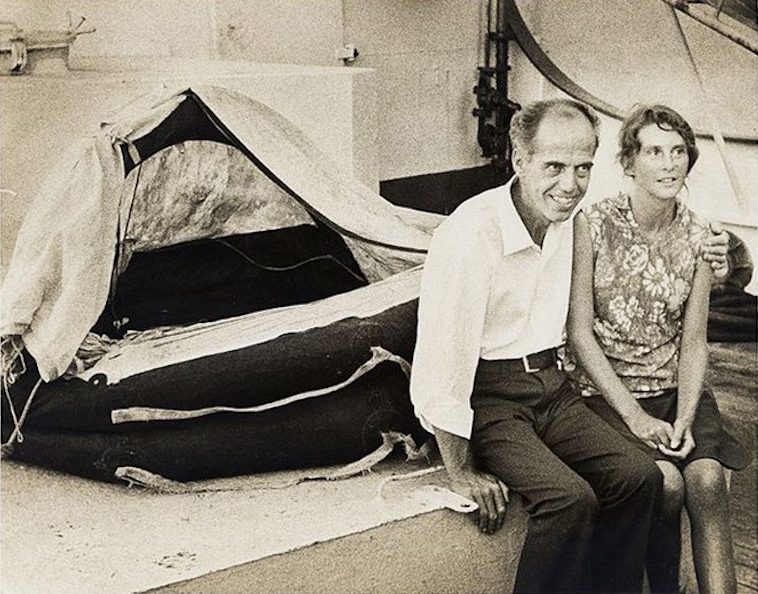 18. Dougal Robertson: In 1972, Dougal, his wife, his son, his three daughters, and a crew of five survived for 38 days at sea after their ship was sunk by a pack of angry killer whales. So much for Shamu being friendly! 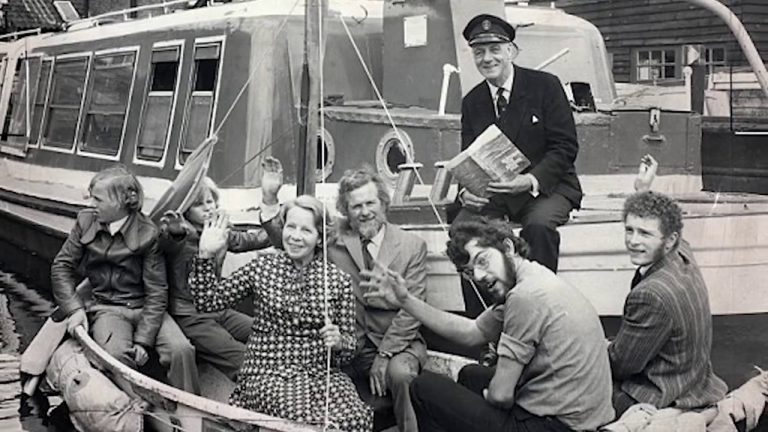 19. John Glennie, Rick Hellriegel, Jim Nalepka, and Phil Hofman: These four friends were excited to sail from their native New Zealand to the island of Tonga in 1989. However, their boat was capsized by a massive wave. The men survived on the wreckage for 118 days before they eventually washed back up on New Zealand’s shore.

20. Nathan Carman: In September 2016, Nathan and his mother, Linda, set out from Rhode Island to go on an overnight sail. Neither expected that their engine room would flood. Nathan’s mother was never found, but he managed to survive. He was rescued 100 miles off the coast after a full week at sea. 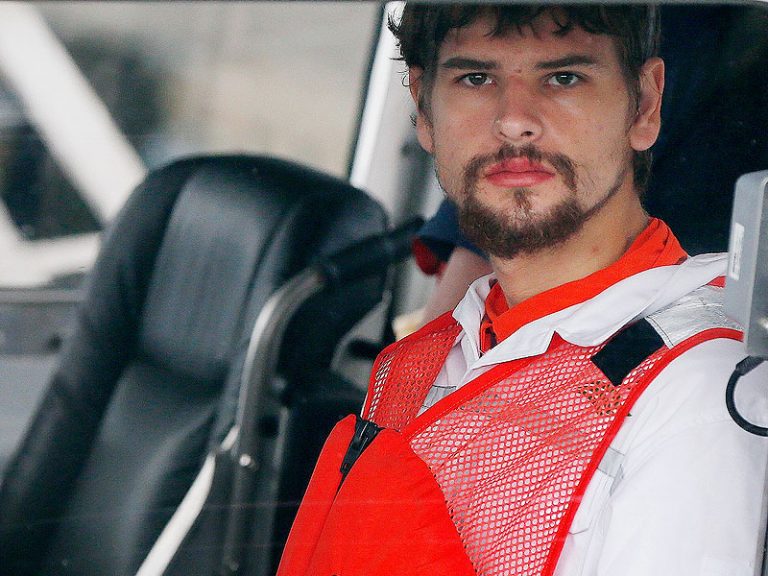 Traveling by boat is truly a thrilling adventure. However, the stories of these sailors and families who were lost at sea are proof that sometimes the unthinkable can become reality. What truly inspiring survivors!