Bored Panda has created a series of hilarious pregnancy comics about all the things your doctor might not have told you about and we’re sure every parent will find them relatable. Check out the comics in the gallery below! 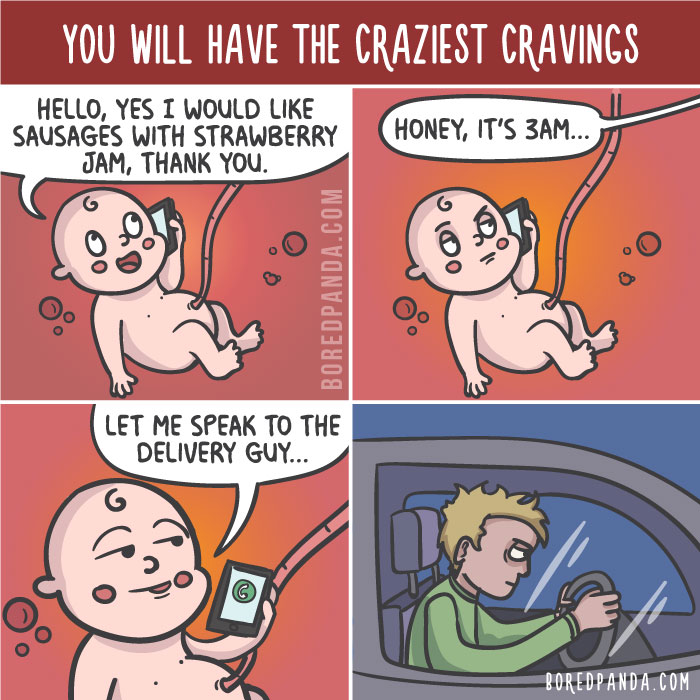 Dr. Jolene Brighten says strange food cravings during pregnancy are completely normal due to a hormonal shift. “Sometimes we can see lower dopamine levels, which will cause you to crave everything,” says the doctor. 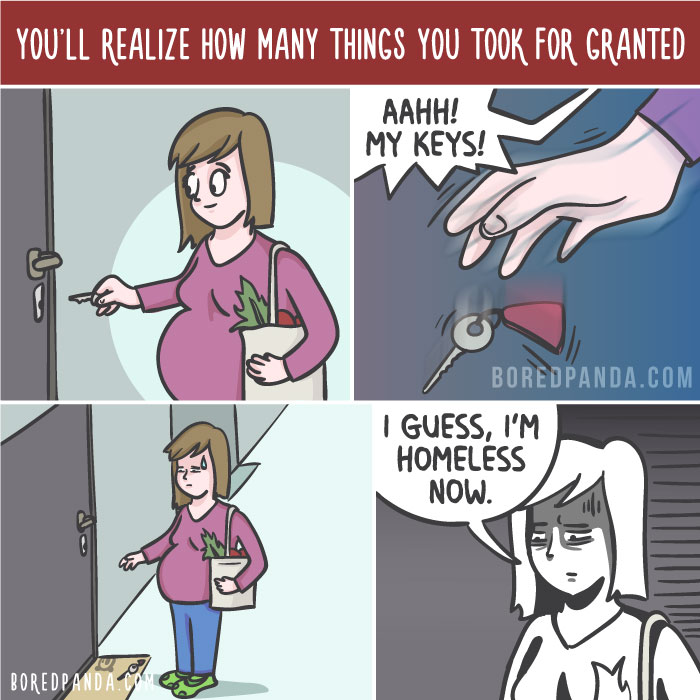 Yale University School of Medicine’s Department of Anesthesiology surveyed 950 women during their pregnancy and found that 645 of them reported back pain, majority of which said it caused trouble sleeping. 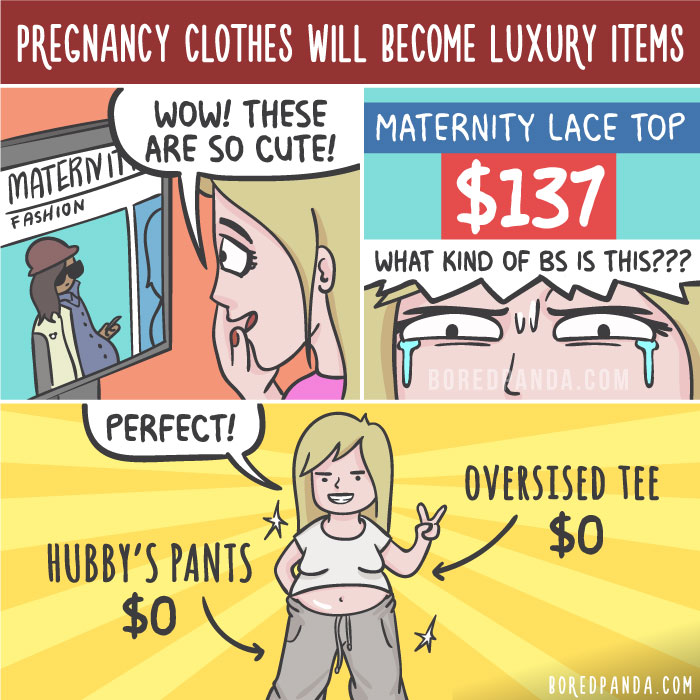 Whatever makes you comfortable, right? 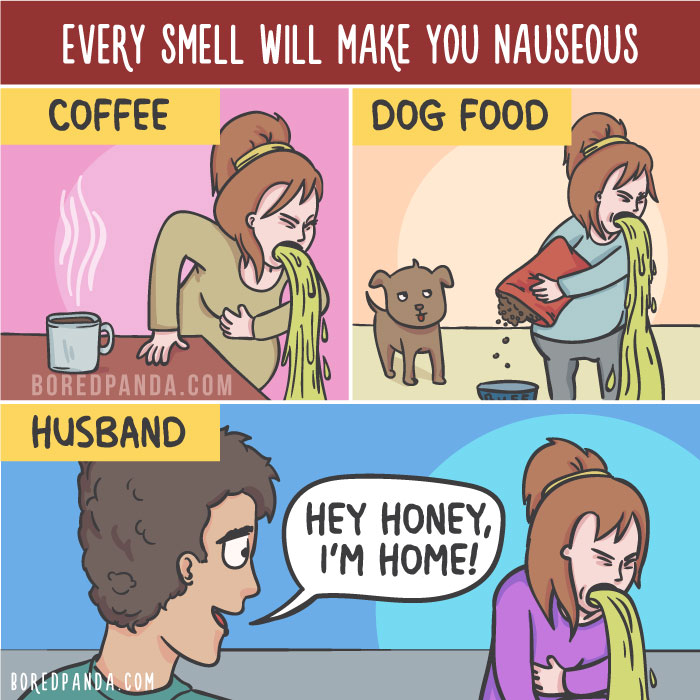 The heightened sense of smell during pregnancy is also caused by hormones – most likely because of a change in estrogen levels. 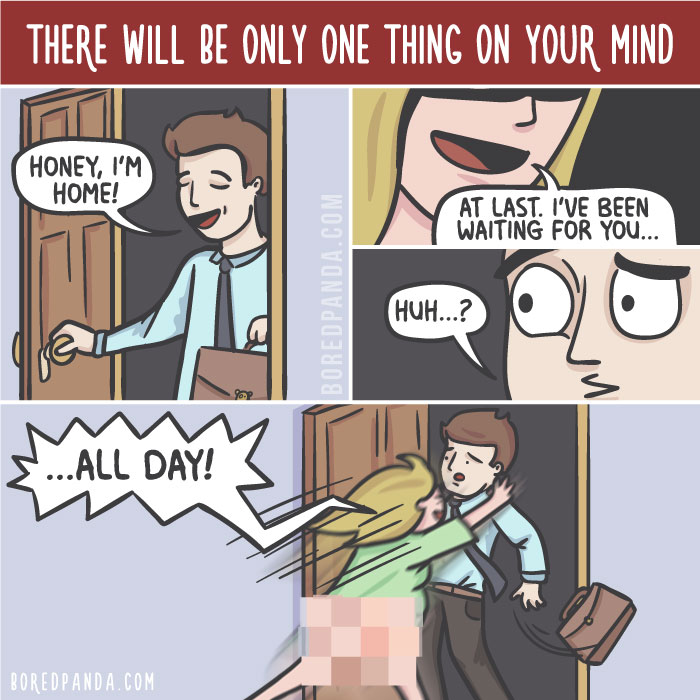 In an interview with Today’s Parent, OB/GYN Doug Black said it’s completely normal for women to experience increased libido during pregnancy, especially in the late first trimester and beyond. Once again, the culprits are the hormones. Just because you see someone looking more fit than you in their pregnancy photos shouldn’t mean you can’t enjoy a nice piece of cake now and then. 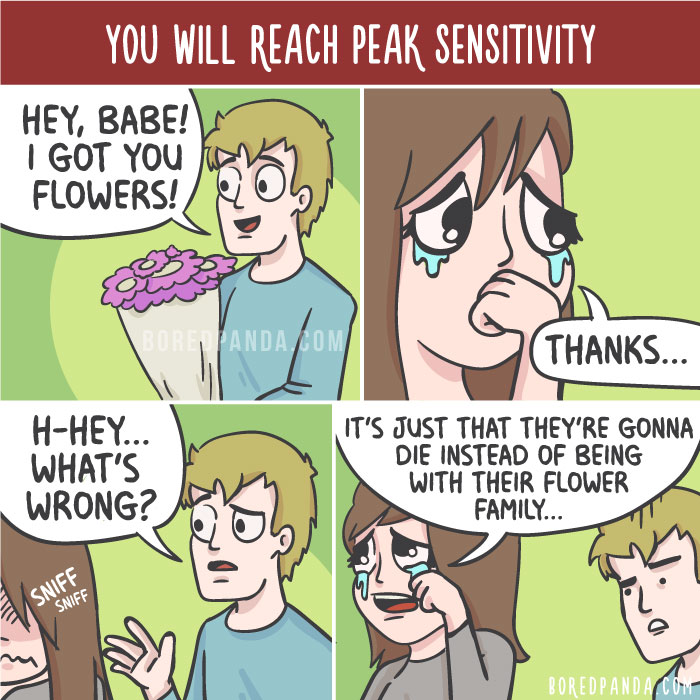 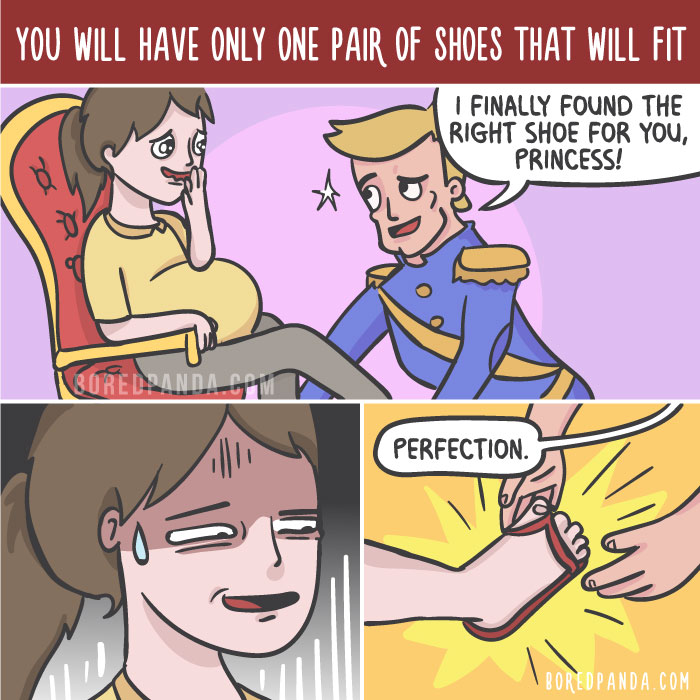 On the plus side, you’ll never have to worry about any untied shoelaces. 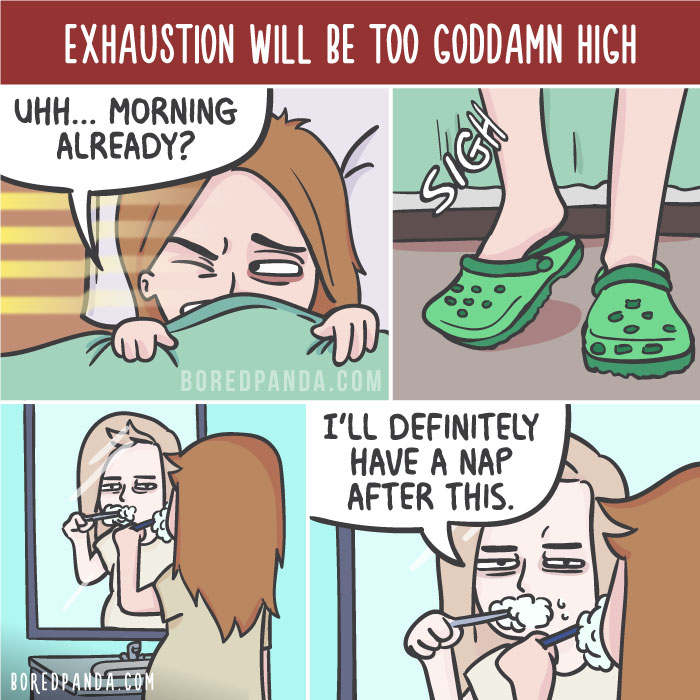 American Pregnancy Association says fatigue during pregnancy is completely normal and is, once again, caused by hormonal changes as your body is producing more blood to carry nutrients for the baby. The perfect outfit for going straight back to bed – it’s like the universe has given you a sign. 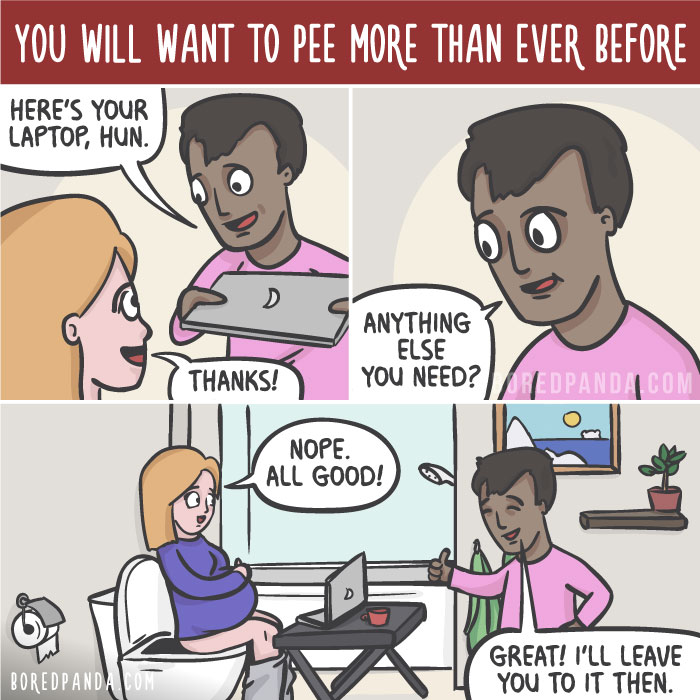 You will pee – a lot. Once again, blame the hormones. 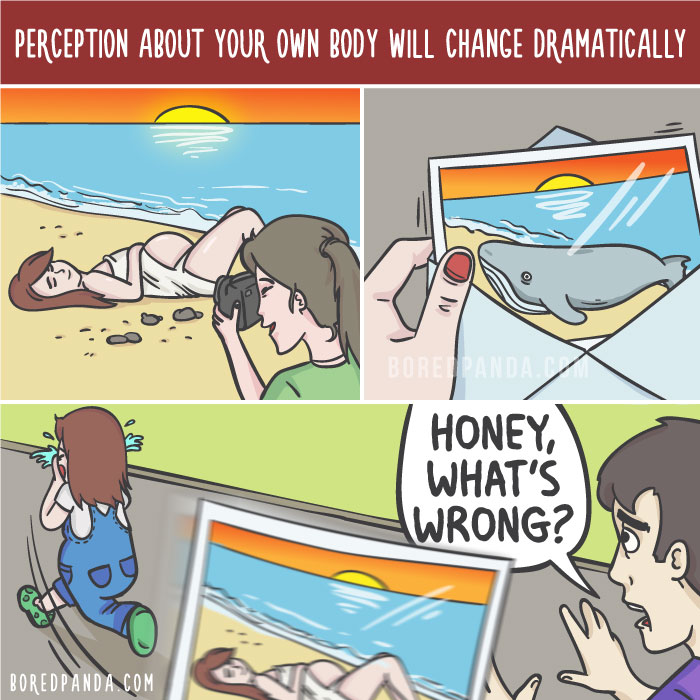 “Women’s perception of their pregnancy body image is varied and depends on the strategies they use to protect against social constructions of female beauty. Women have unrealistic expectations for their postpartum body, highlighting this as an area where women need better support,” concluded BMC in one of their studies. 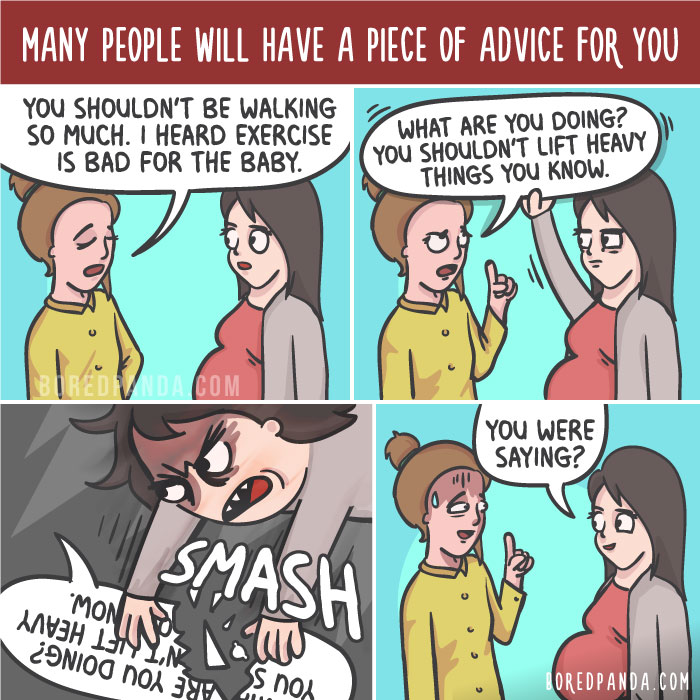 Got any more “helpful” advice I could ignore? 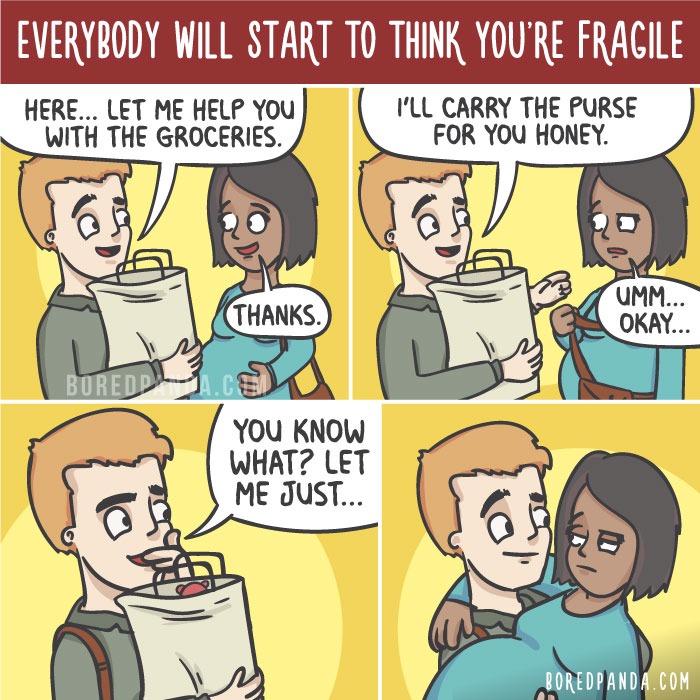 It’s like a free delivery service – only you’re the one being delivered. 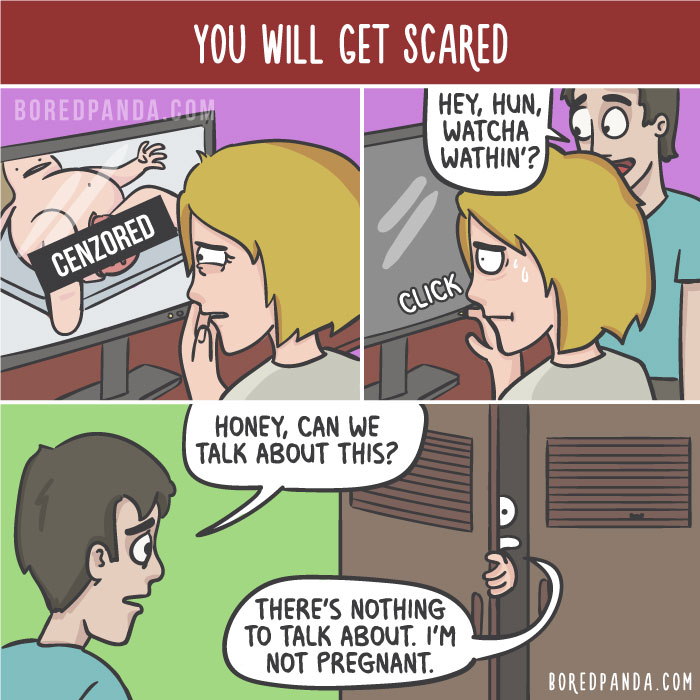 According to Healthline, more than 1 in 10 women experience anxiety at some point during pregnancy. Yeah, try peeing every five minutes and wearing nothing but flip-flops for nine months, Jessica. 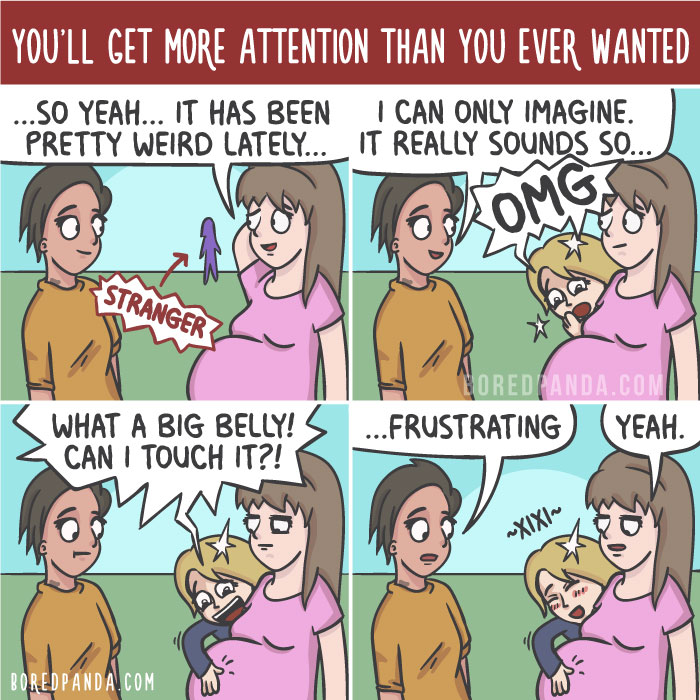 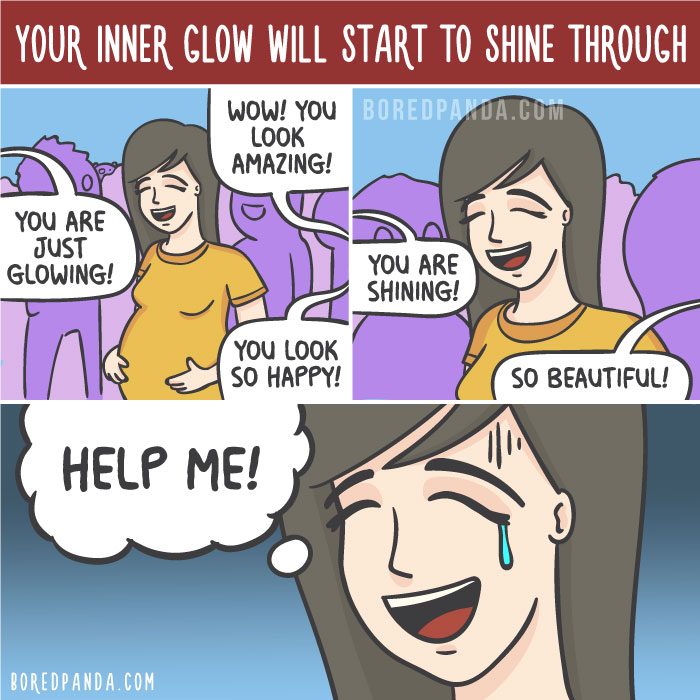 According to the American Pregnancy Association, an increase of hormones during pregnancy causes your glands to produce more oil, giving you the “glowing” appearance. 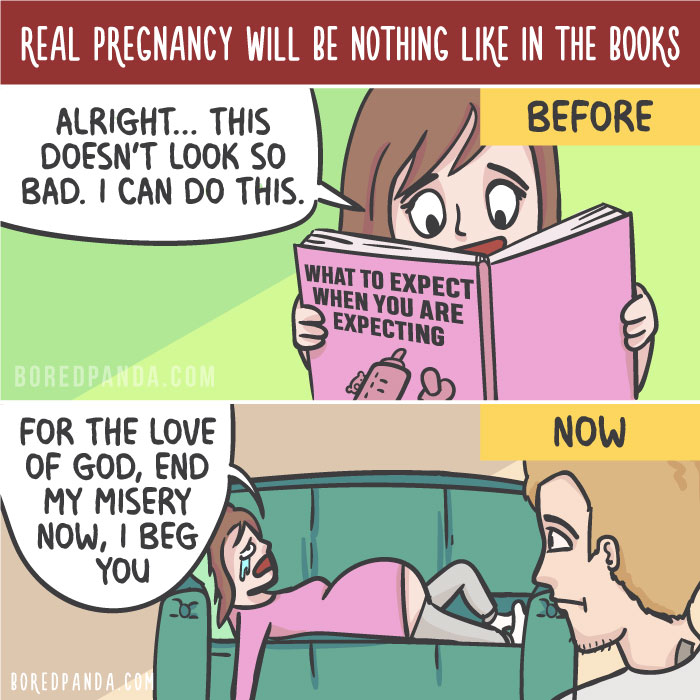 “A recent study suggests that the mothers who read the most manuals on mothering report the highest level of depressive symptoms (it is not clear whether the depression is the consequence of reading so many manuals or the reason they are reading them in the first place),” writes professor Jacqueline Rose. The brown line that may appear on your belly during pregnancy is called linea nigra and is, once again, caused by hormones. It typically disappears a few months after giving birth. They should just have special parking spots for pregnant people.