One major rule every tourist should know is that no matter where you travel, you have to be respectful to the place you’re visiting. However, some tourists clearly didn’t receive the memo and decided that being a jerk is completely acceptable behavior.

Killed For A Selfie: Baby Dolphin Dies After Being Passed Around By Tourists As They Posed For Photos With It On A Spanish Beach Tourists in southern Spain found a lone baby dolphin wandering near the shore and instead of calling animal rescue, they decided it would be a smart idea to pass it around and take selfies with it. When the animal workers finally arrived 15 minutes later, the baby dolphin had already died from stress. “Cetaceans are very susceptible to stress, and crowding round it to take photos and to touch it causes them a big shock which greatly accelerates cardio-respiratory failure, which is what happened,” said a representative of Equinac, a local marine wildlife protection group, in an interview with Daily Mail.

A few years back, the unique sandstone formation, nicknamed “duckbill”, was knocked over by vandals on purpose as a form of revenge after their friend had broken their leg because of the rock. Some visitors of a Beijing wildlife park started chasing and plucking feathers from the peacocks’ tails. Even though other tourists tried stopping them, the offenders did not stop until the last peacock was scared away. 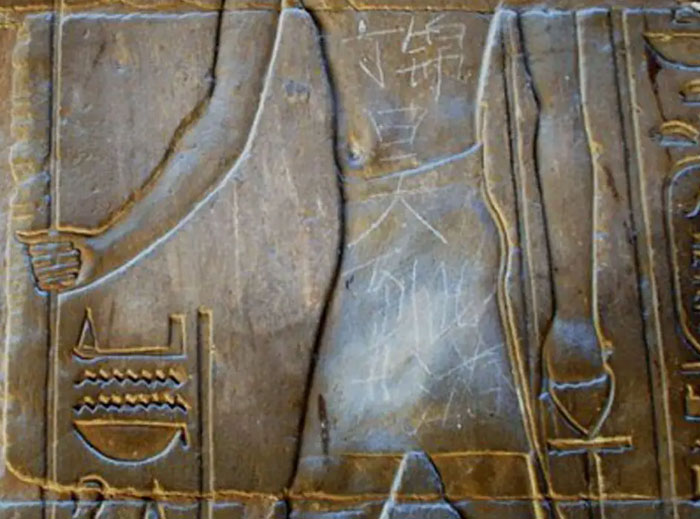 Ding Jinhao, a 15-year-old from China, scratched “Ding Jinhao was here” into 3,500-year-old Egyptian artwork located at the Temple of Luxor. People on the internet quickly uncovered the culprit and his parents had to publicly apologize for what their child had done.

Chinese tourists have broken into and stolen lotus flowers from the Longqiao Cultural and Ecological Park located in Sichuan, China on multiple occasions. Every year the olive ridley sea turtles come out of the sea to nest in the Ostional Wildlife Refuge, located in Guanacaste, Costa Rica. However, it became a popular tourist attraction with many people coming over to take pictures with the turtles. Sadly, the tourists scared away many of the turtles, meaning some of them did not get to lay eggs. 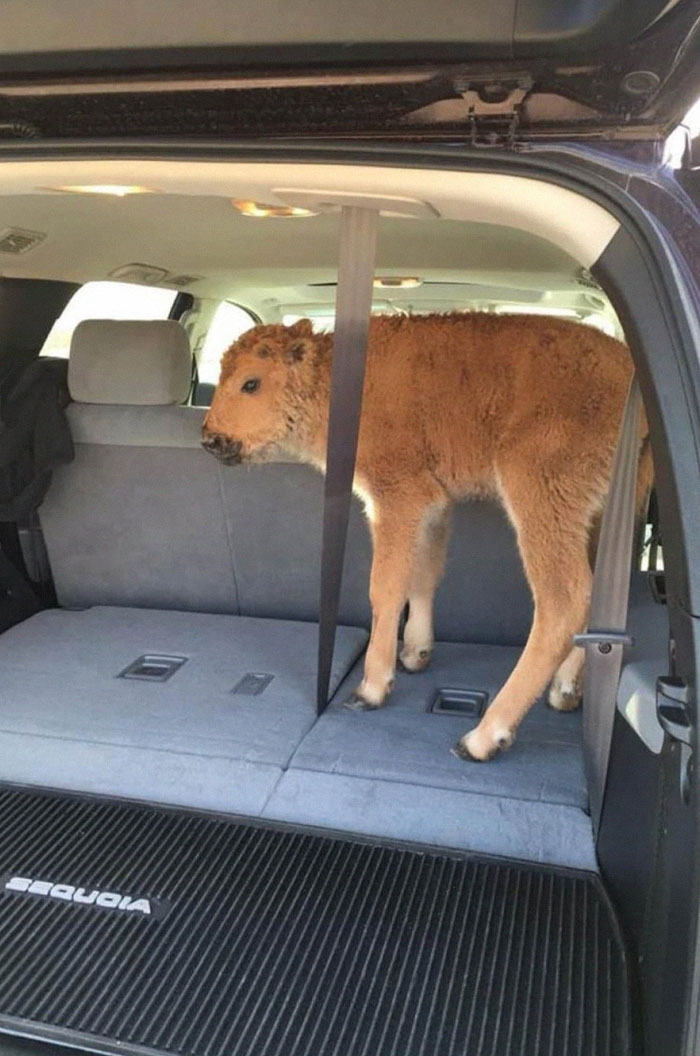 What started as a good deed actually ended tragically for this baby bison. A couple of tourists found it near a road in Yellowstone National Park and put it in their car to warm it up. Sadly, this meant that the bison was separated from the others and there was no way of telling which one of the adult bison was its mother. Eventually, the baby bison had to be euthanized since it started creating dangerous situations by approaching people and cars on the road.

Tourist Knocked Down The Saint Michael Statue While Trying To Take A Selfie (Lisbon, Portugal)

When trying to take a selfie with the statue of Saint Michael located at the National Museum of Ancient Art in Lisbon, a visitor ended up knocking it over and shattering it irreparably. 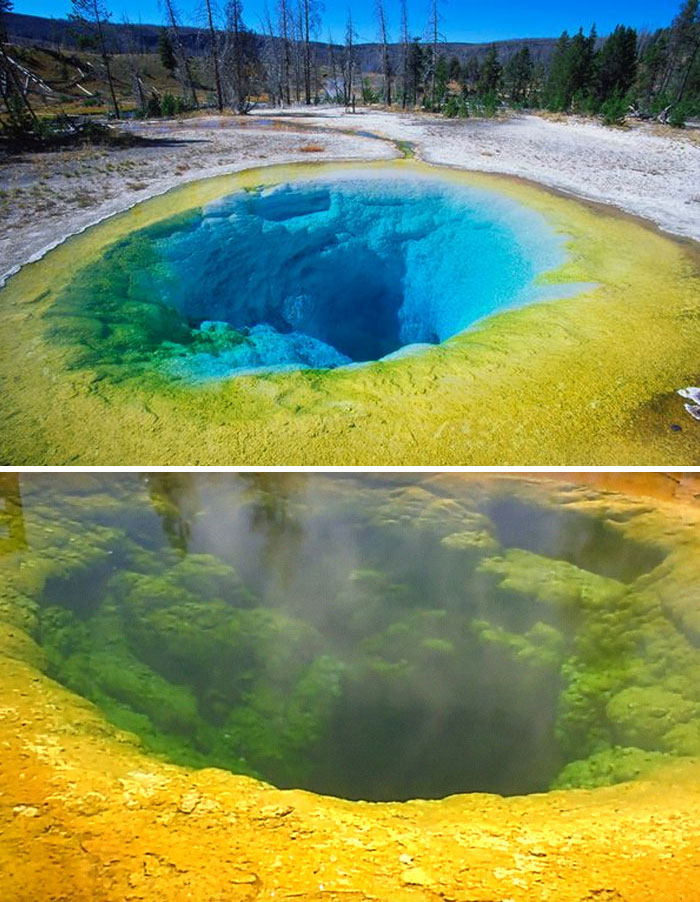 People were throwing so much “good luck” coins and rocks into the Morning Glory hot spring, it clogged up the pool’s vents, slowing down water circulation and allowing bacteria to proliferate, thus causing the unusual green coloring.

Man Climbed Onto The Pedestal The Statue Sits Upon, Attempted To Take A Selfie And Knocked The Statue Over 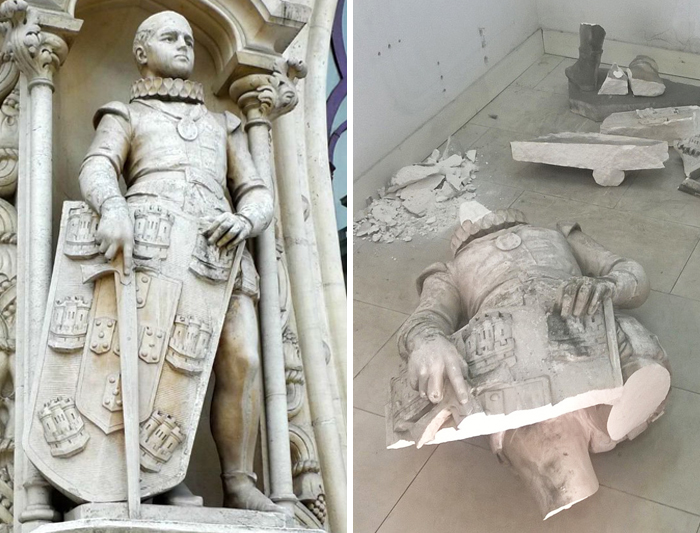 A tourist tried to take a selfie with the 130-year-old Dom Sebastiao statue in Lisbon, Portugal and ended up knocking it over. The culprit was arrested after attempting to run away.

Tourists Destroy Beautiful Azalea Trees In Bloom In China: Some Even Use Branches For Barbecue 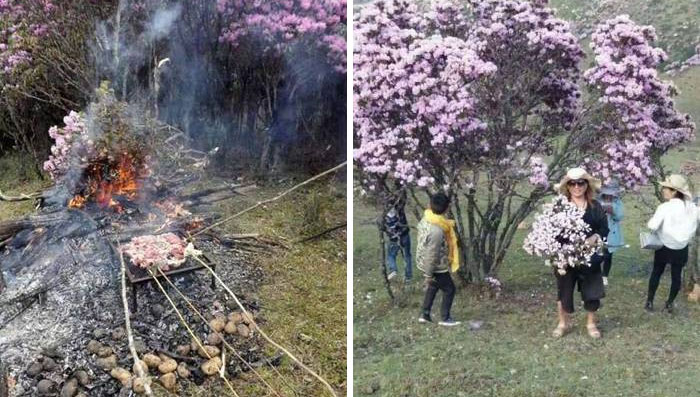 Every year the blooming azalea trees attract hundreds of tourists to the Liangshan Yi Autonomous Prefecture in China. Sadly, not everyone is respectful to its beautiful nature. Some tourists break off branches of the trees and others even used them to start a barbecue. 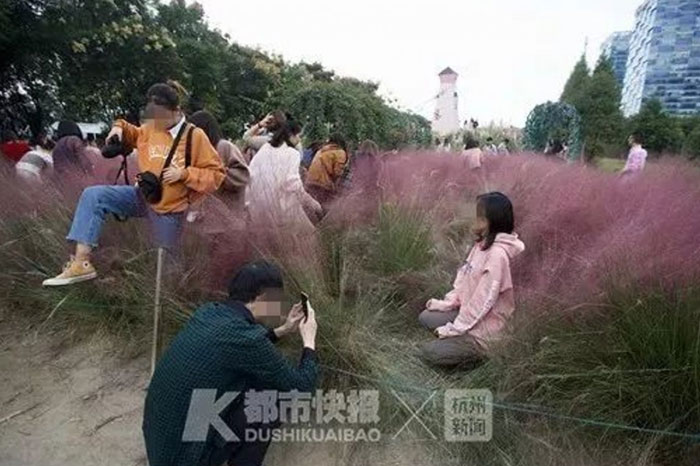 According to South China Morning Post, a field of beautiful pink grass flowers had to be cut down after selfie-taking tourists trampled it, despite the field being blocked by multiple rope barriers.

The Beach Near My House After The Tourists Left Hundreds of plastic plates and bags litter the Margate beach in United Kingdom after the tourists had left. “We love to see people enjoying our beautiful sandy beaches but the mess that was left on Saturday was shocking and heartbreaking to see,” says council leader Bob Bayford. 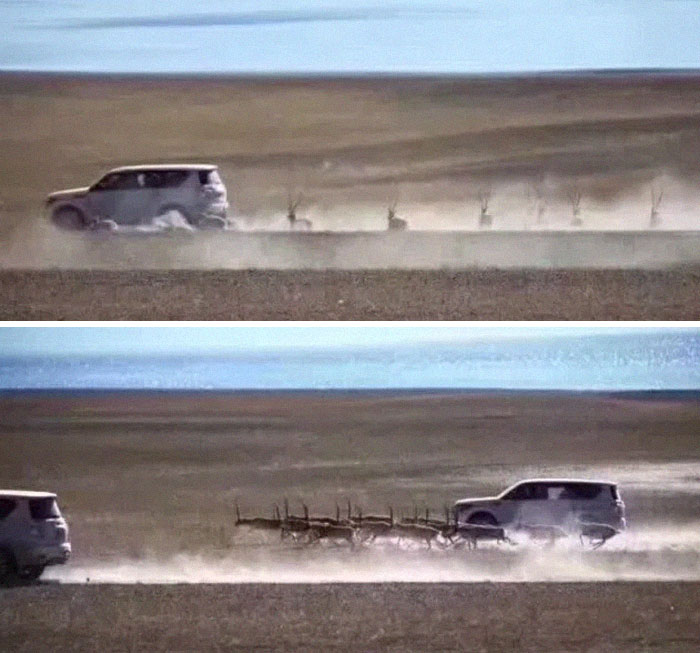 Two white SUVs had illegally trespassed into the Selincuo National Nature Reserve and started chasing a herd of Tibetan antelopes. Someone captured footage of it and posted in Weibo, causing a major uproar. This eventually led to the arrest of seven people who were each fined 15,000 yuan (2,257 US dollars).

Tourists Destroy Natural Wonder By Carving ‘Send Nudes’ Into It 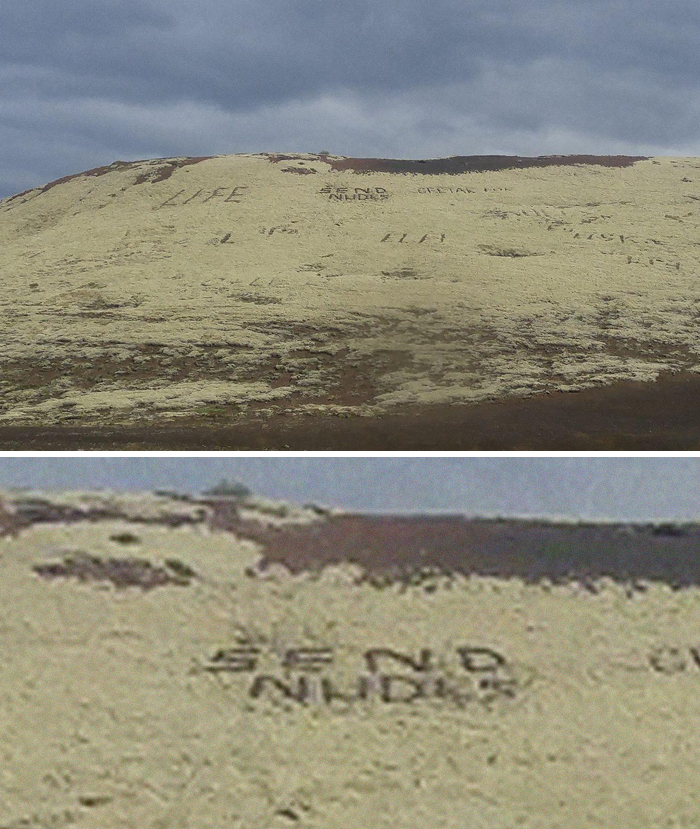 The words “send nudes” were carved onto the side of a moss-covered hill located in South Iceland. It will take years for the moss to regrow and, sadly, this is not the first time someone has done a similar thing as evident by multiple other words carved into the side of the hill. 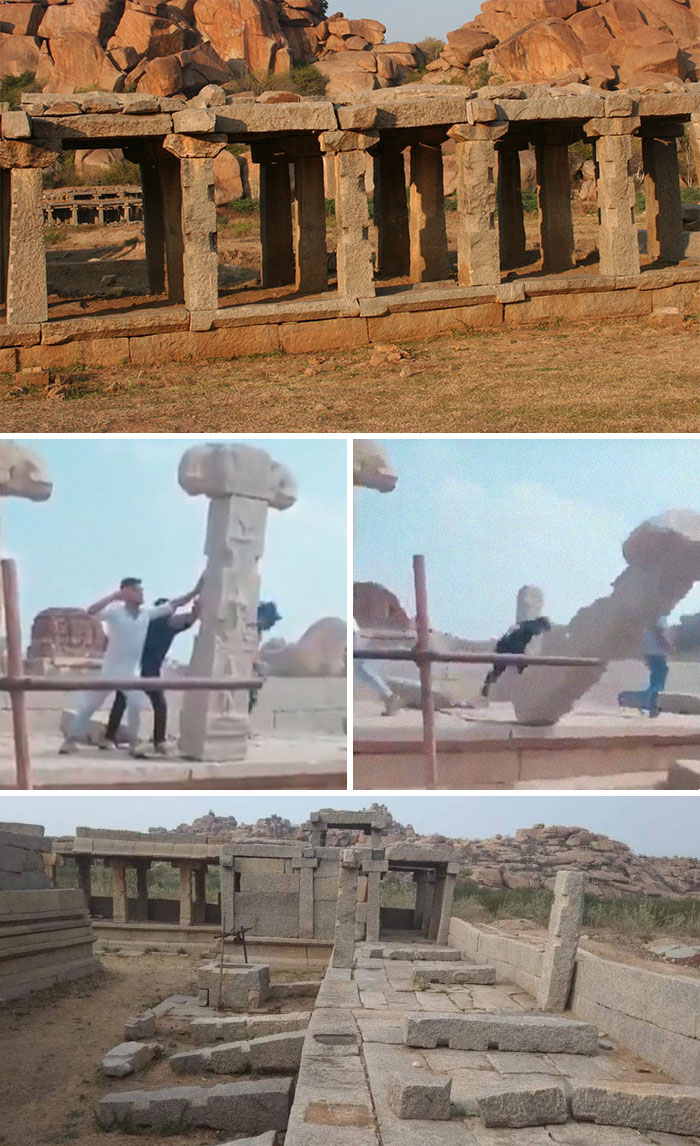 A group of vandals was caught on video destroying the pillars of the Vishnu temple in Hampi, India. They were arrested a week after the video surfaced and all four admitted to their crime. “They were excited [about] seeing the monuments in Hampi,” said Arun Rangarajan. “They claim to have toppled the pillar in sheer excitement. They had no idea how historically significant Hampi is.” 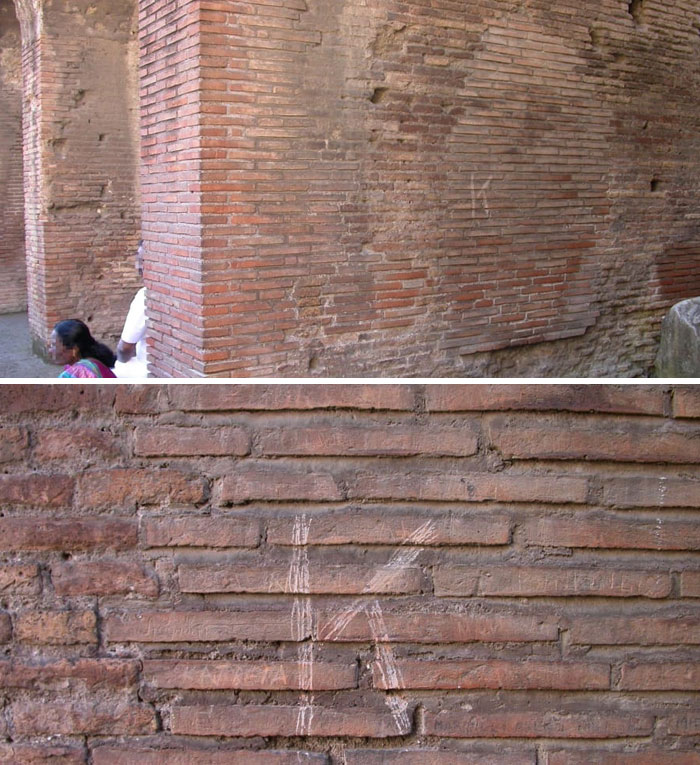 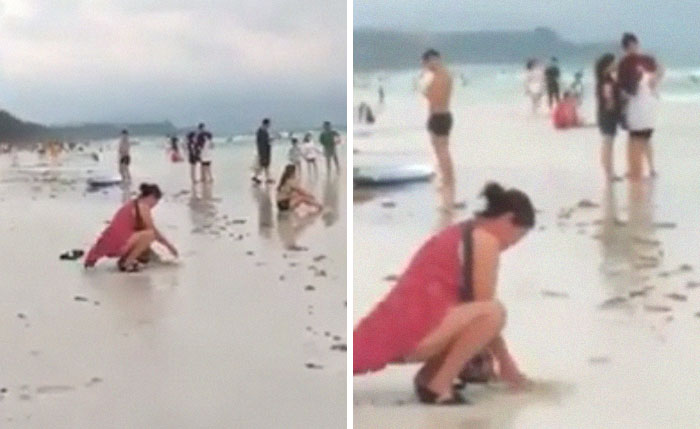 A while ago, someone had caught a video of a woman burying a soiled diaper in one of the beaches in the Philippines. This made the local authorities close the area and perform water quality tests.

The “Two Hercules” statue is one of the main attractions of the city of Cremona, Italy. So imagine the locals’ disappointment when two tourists broke off a part of their beloved statue when trying to take a selfie. Sadly, the culprits are yet to be located. 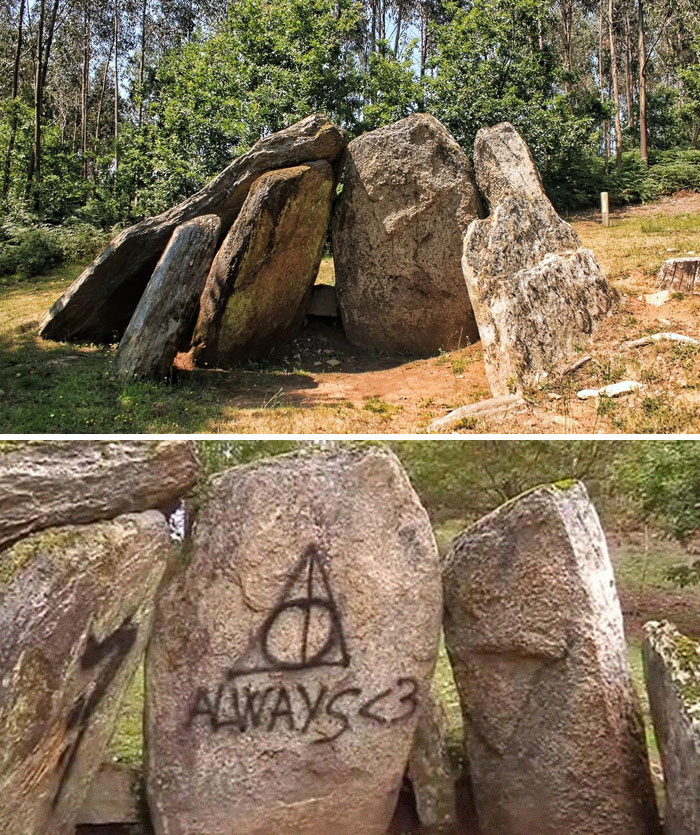 Someone decided to spray paint the ‘Deathly Hallows’ symbol on the La Casa dos Mouros dolmen, a protected site located in Vigo, Galicia. “Maybe JK Rowling dropped by to promote her latest spin-off,” joked Mayor Oscar Dominguez. “Either way, it is clear that the graffiti was carried out by an amateur in the world of magic.” 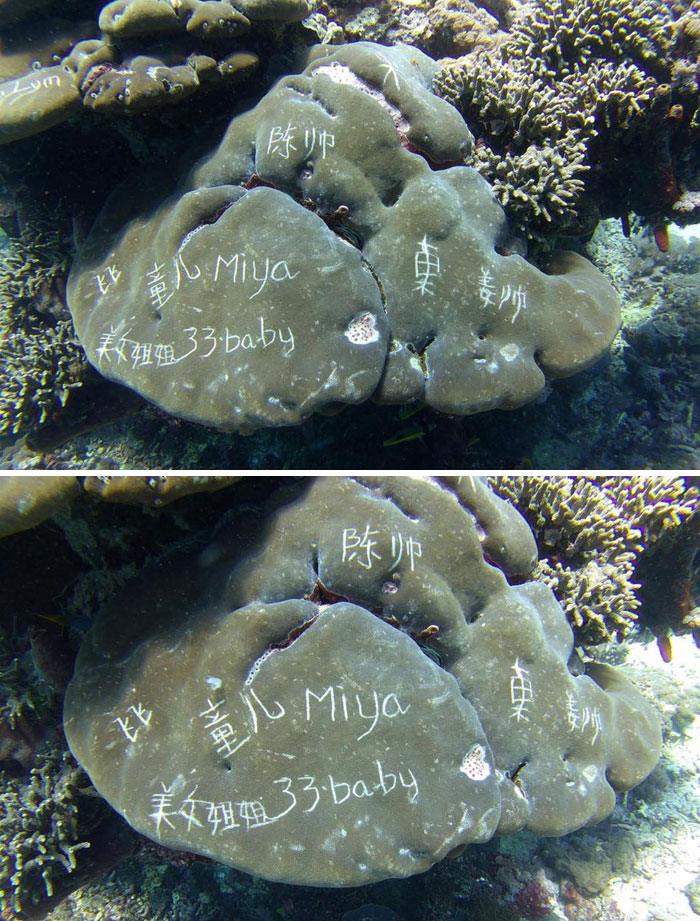 A while ago, diving center OK Divers posted pictures of defaced corals and the photos quickly went viral. “Like many of you, we believe that their dive guide should have known better than to let them do this,” said OK Divers. “Nonetheless, the diver has come forward, they are truly sorry. Even though it won’t help the coral, we appreciate their honesty and believe they have learned a lesson they will never forget … [we ask you to] think of what we all can do to prevent such things from happening and how we can protect the precious underwater world.”

A 200,000-year-old land formation located in a geopark in Zhangye, central China, was damaged by a group of Chinese tourists after they decided to walk on the striped sand. The culprits even uploaded a video of themselves performing the act. This led to the local authorities launching an investigation and experts were called in to determine the damage caused. 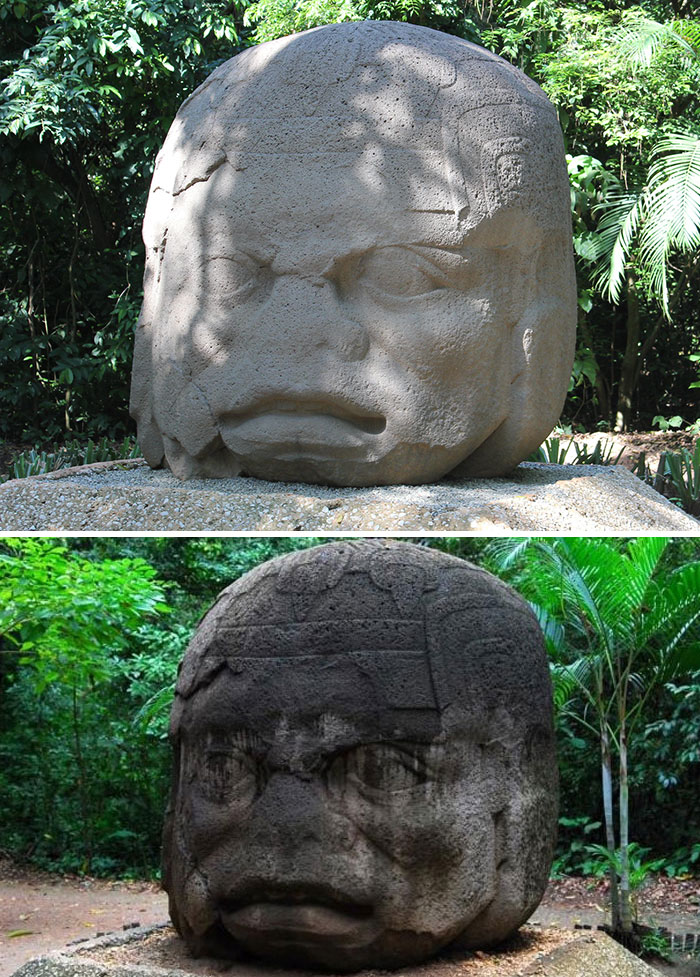 Two Indonesian tourists damaged 15 stone sculptures dating back to 1,000 BC located in the La Venta Museum and Park in Tabasco, Mexico, by spraying liquid oil on them. Why they carried oil on them is a whole different story. Careless tourists started carving their initials into the bamboo trees located in a Kyoto bamboo forest, leading to the trees “crying” and eventually having to be cut down.

Tourists Allegedly Vandalize A Mosque In South Of Morocco 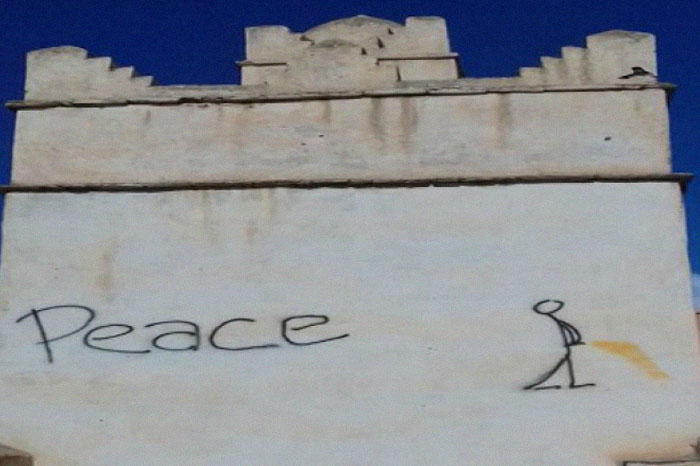 Tourists vacationing in the Boutbouqalt resort left offensive insults on the side of a local mosque, leading to the police opening an investigation, according to news site Tiznit37.