Check out the weirdest things found during structural inspections in the gallery below!

The build date and fabrication number was stamped into the center of the steel. You can see that the turntable was built on Dec 11th, 1917. This thing was discovered while doing an earthquake inspection for a large industrial building in DTLA. 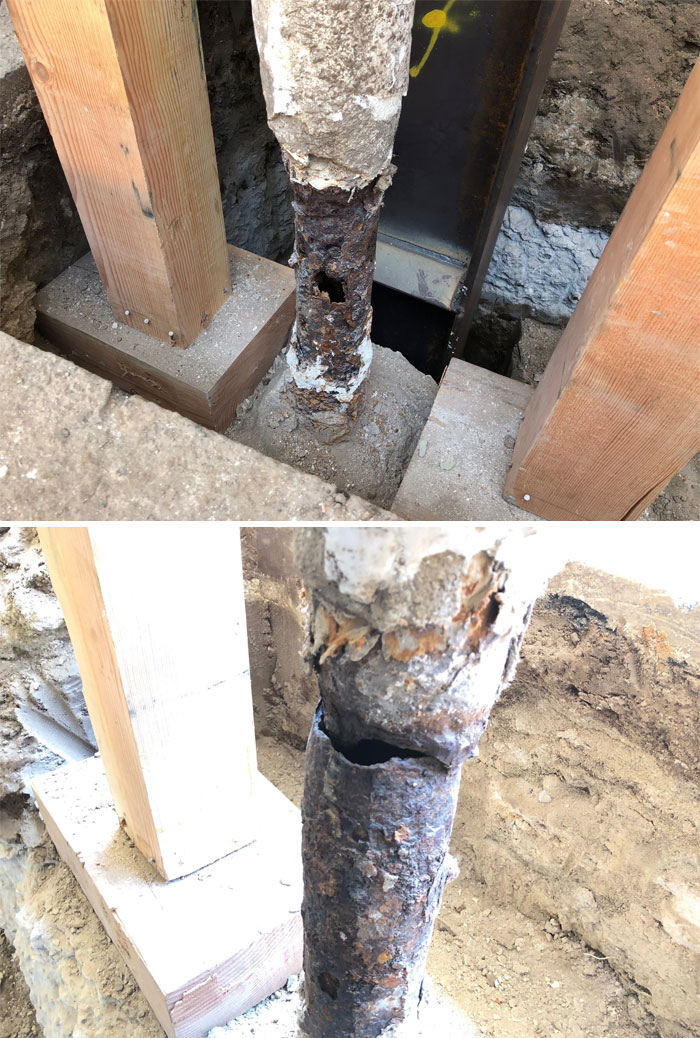 Image 1: This was a column on a soft-story retrofit project we have in Los Angeles. As you can see, the column has rusted to a point that it has become very brittle and weak. At the time this was discovered, emergency shoring was put into place for additional support.


That very same night, the Ridgecrest Earthquake happened. A 6.4-magnitude earthquake struck Ridgecrest, California, some 100 miles away from Los Angeles.

Image2: Once we came back to the property the very next day, we noticed the entire column had snapped in half due to the movement from the quake! If we hadn’t installed that additional shoring, the unit above may have met the ground… 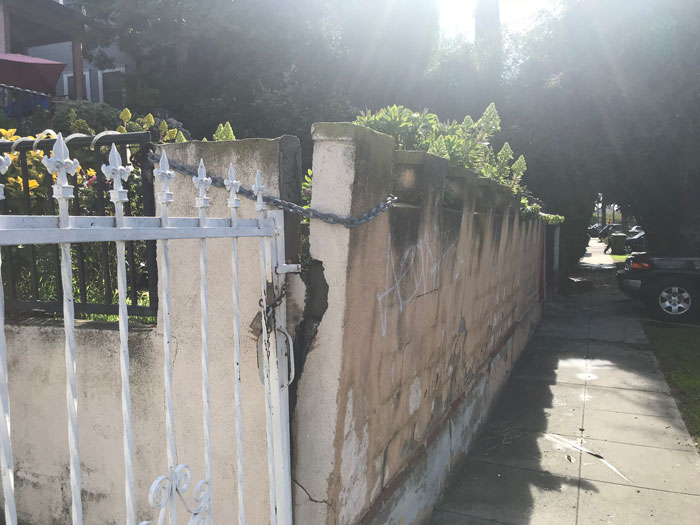 This was a retaining wall being held up by a chain…

I would recommend walking on the opposite side of the road. 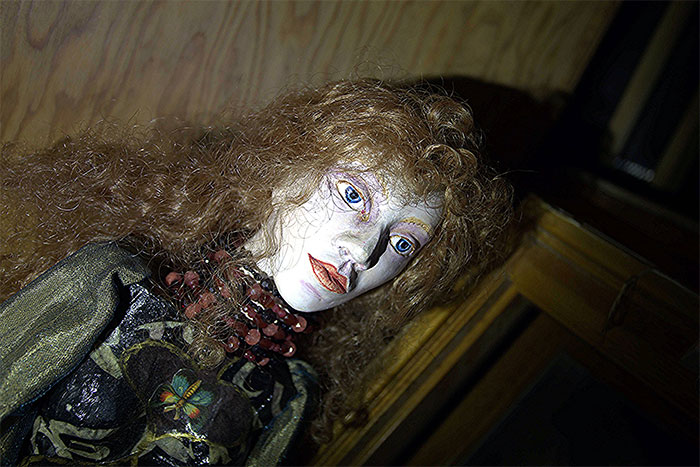 We’ve seen a few dolls under homes before, but this one may take the cake on the creepiest one so far.

This had to be the first image because it is by far my favorite this week. The absolute definition of a “DIY” project. This entire crawlspace was filled with tree branch posts, many of which were resting upon rocks and logs. I like to think it’s just a person’s bad hiding spot in a game of prop hunt. This one will fall some day. I will keep you posted. 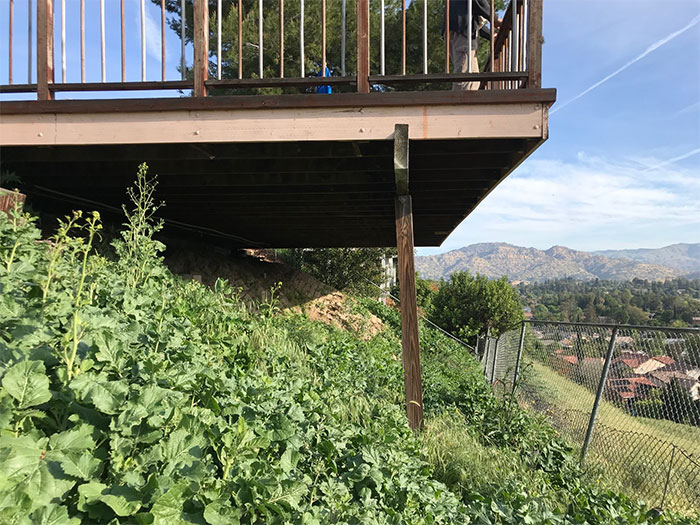 A hillside deck with some inward leaning posts. I would not want to be that guy up top. 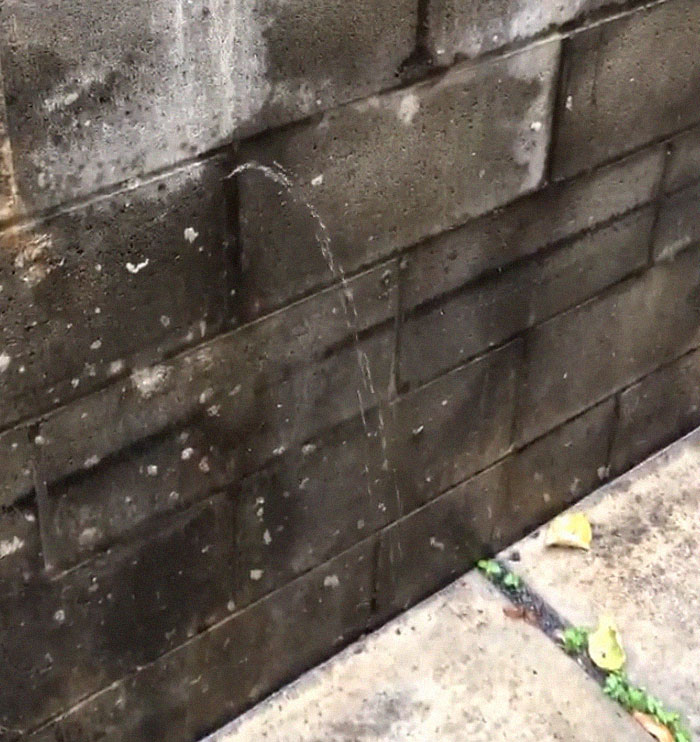 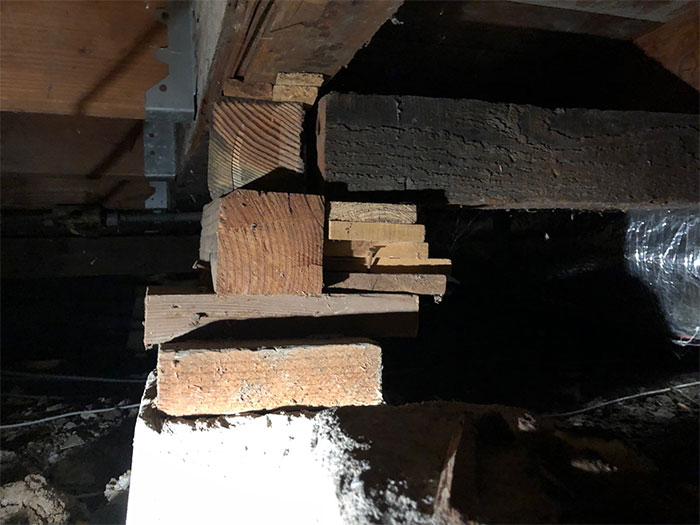 Somebody has some serious Jenga skills!

But on a more serious note, this is a brick wall that had no reinforcement on either side. Over time, the weight from above caused the bowing of this wall. The earth below was actually quite sturdy but the rest of the home wasn’t.

There was also some dirt on the other side, which caused the wall to bow inward as opposed to outward. We like to call it an inverse surcharge. 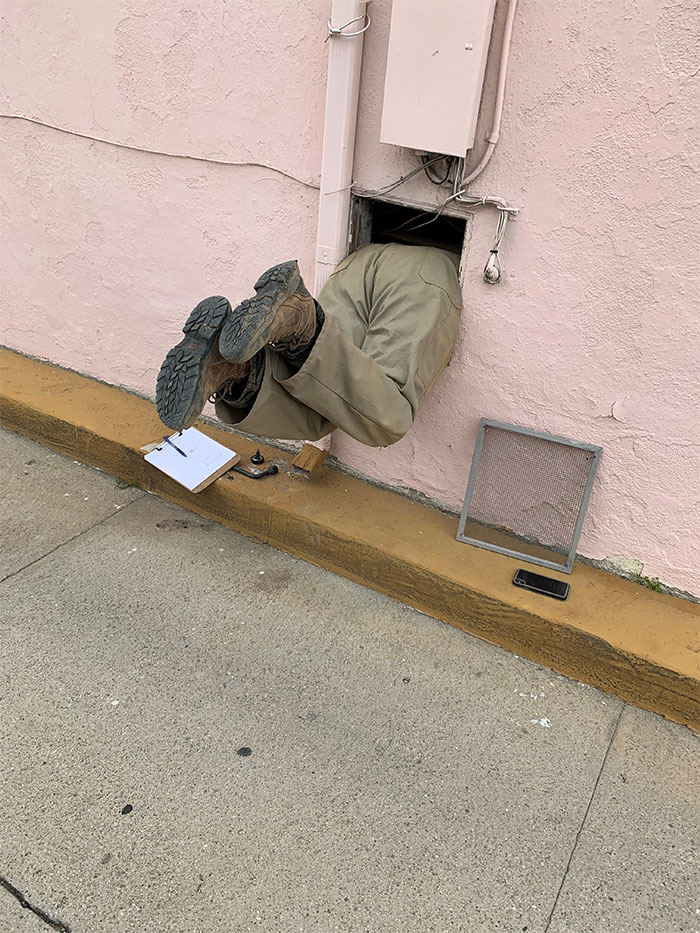 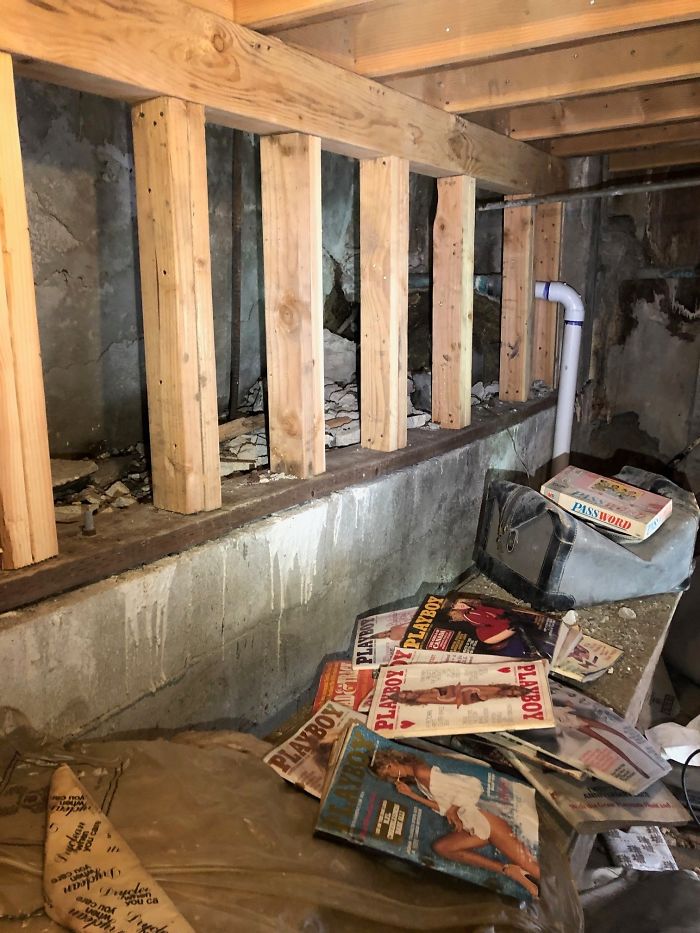 We found some vintage… booklets in the crawlspace of this home. No, we did not take them and sell them to collectors.

This was an old 1900’s apartment building that was being held up by some less then effective stud supports. You can see the newer members to the right and left of the original support. They had to trim down the newer ones to compensate for the sagging that was caused by the originals. Scary stuff. 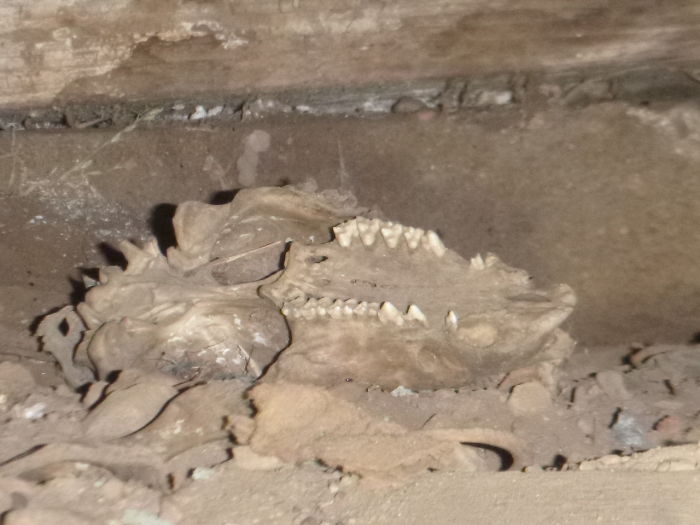 This was the skull of some very large animal we found under a crawlspace. It isn’t just a normal rat or opossum skull as it was the size of a basketball. My guess would be some sort of alien (such as E.T.) or a Silver Back Gorilla, but I’m not too sure. 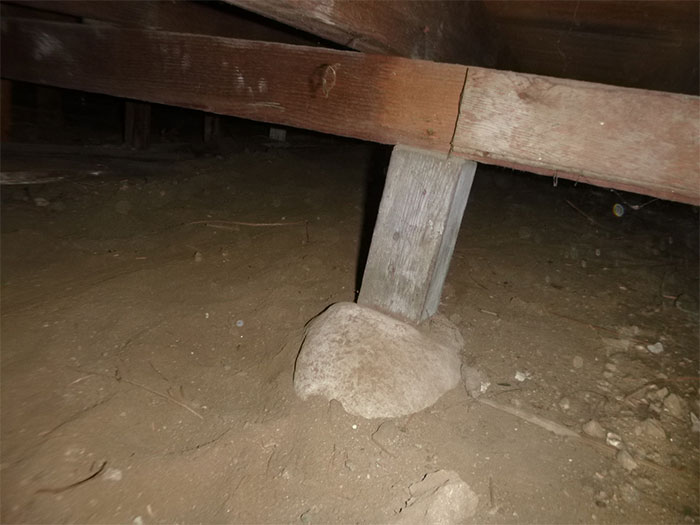 Yes, that is a stone acting as a concrete pier for the post. *Insert joke about the post being stoned here* MDF, or Medium Density Fiber Board, is used in a lot of furniture and aesthetic pieces. This type of material should NOT be used for anything structural. A lot of the time it isn’t treated well for moisture or natural elements. This is what happens when it becomes exposed to water over a short period of time… it will begin to fray out and decay. It looks like mold, but it’s actually the wood fibers being pulled apart due to moisture. Don’t use MDF for your structural work!

This was a massive sinkhole that opened up in the back of somebody’s property. The pictures don’t show it well, but the hole is 12′ deep and about 6′ wide. At the bottom you can clearly see an old clay pipe from the city. It hasn’t been used in many, many years. It was thought to be an issue involving a septic cap. It’s possible the cap caved in to the tank and caused this massive hole to open. This thing was scary to stand next to in person. 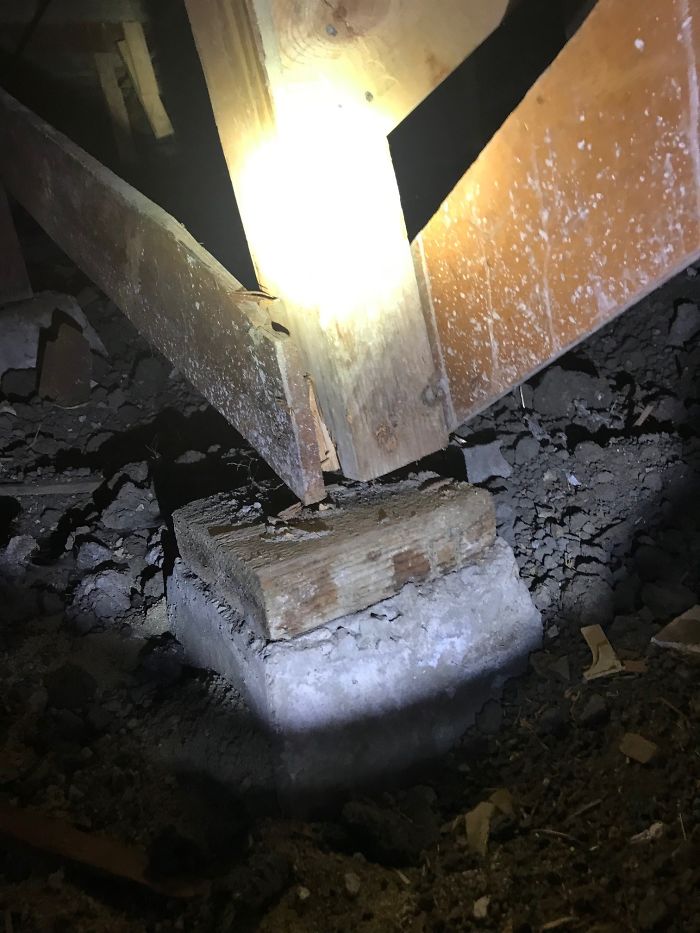 An older pier that wasn’t even in contact with the post above. This would normally cause some dipping in the floors over time. 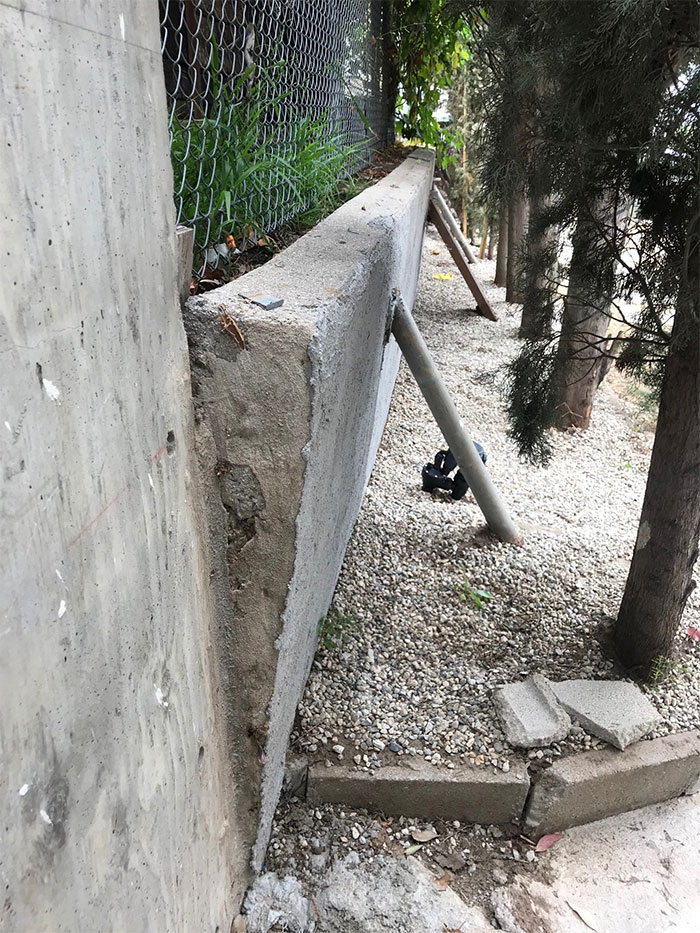 This was a hillside deck that had rotted and been damaged by termites over many years. The result is a decayed, unstable and leaning deck that is ready to slip. 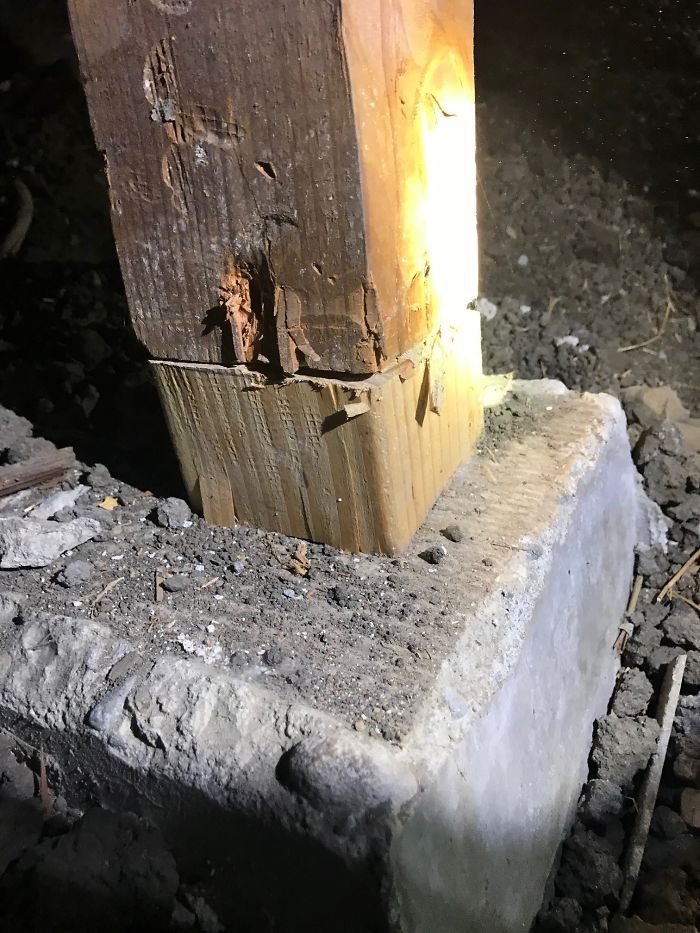 Here we have a classic garden wall with improper footings and tie-ins to the other wall. It could also be the result of a “surcharge.” A surcharge is the result of pressure being built up against a surface, usually caused by the settlement of nearby structures, such as a house. I put that in layman’s terms so don’t yell at me for not being technical. 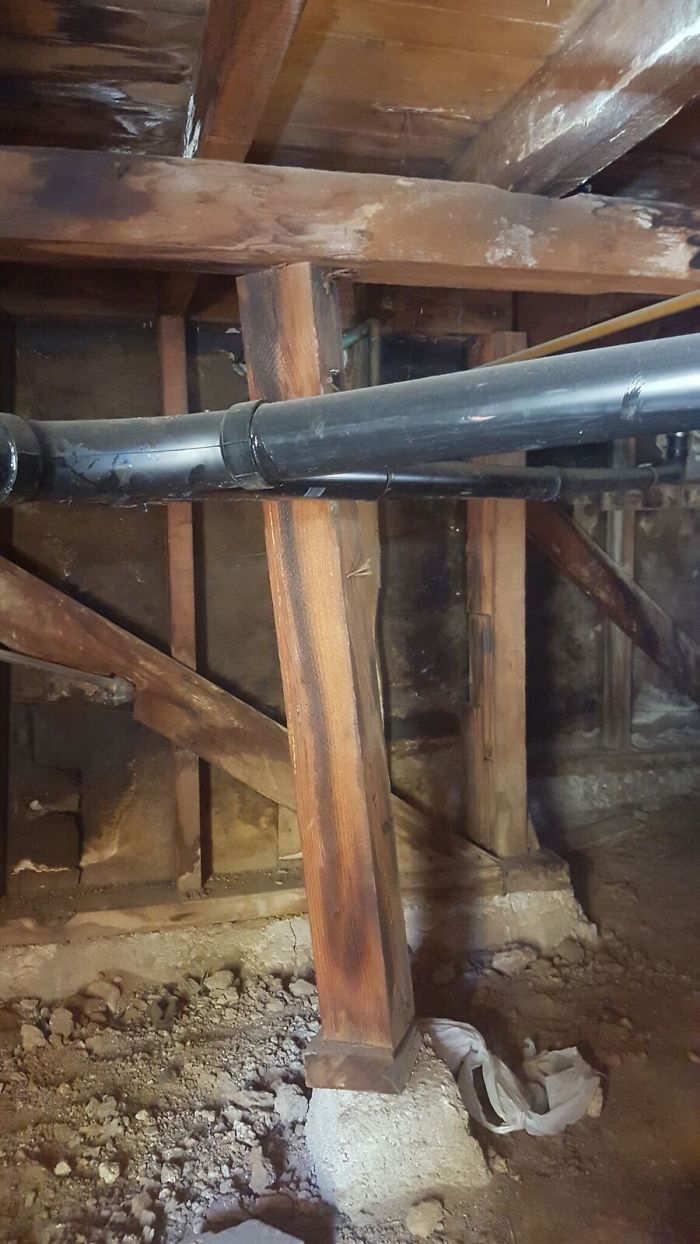 This is a post that had been spliced together with another random piece of wood. Why somebody would do this is beyond me. 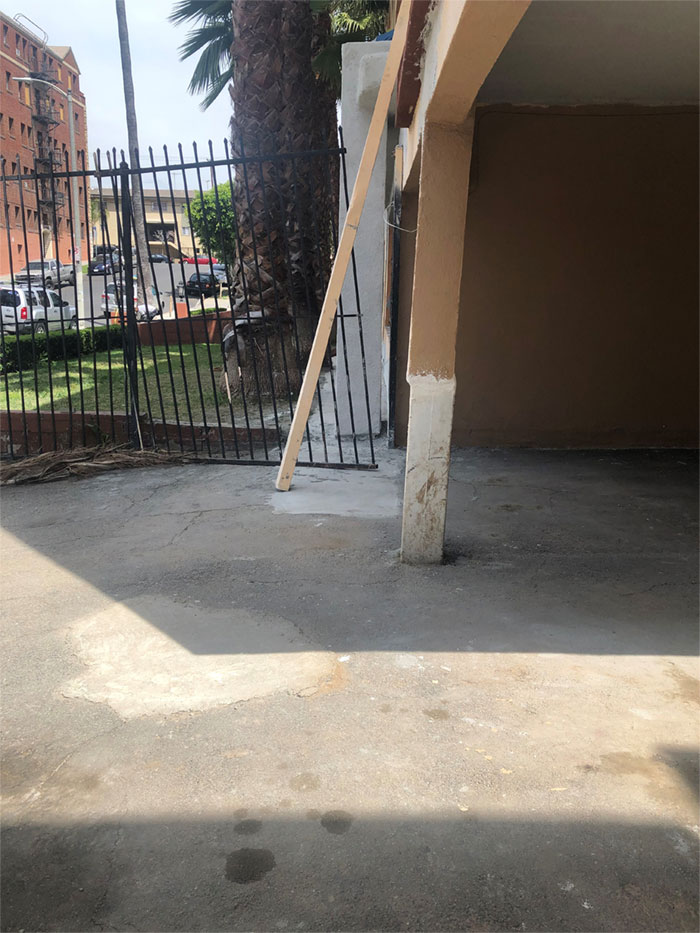 Lean with it, rock with it! 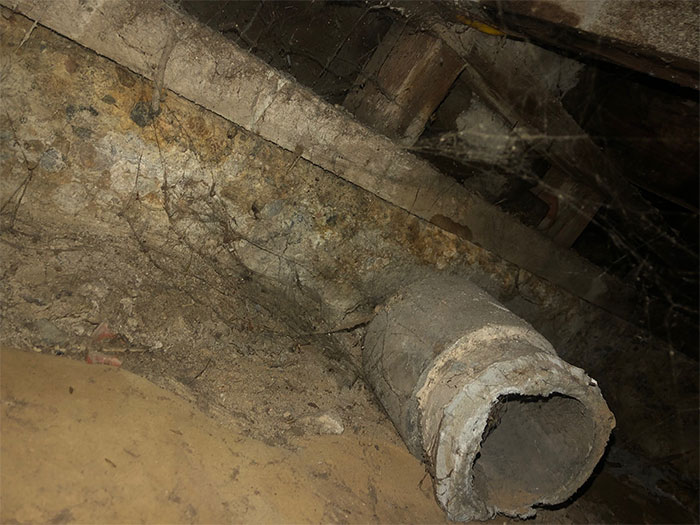 We also specialize in soft-story retrofits. These are under a mandatory ordinance by the city of LA and many other surrounding cities. We were called out to inspect and correct a recently completed project done by another company.

This was the actual finished product by this other group… Now, we have been doing these retrofits since before the city ordinance, but many companies jumped on the bandwagon to make a quick buck. This is the result of a “quick buck” job. The cheapest isn’t always the best option folks. 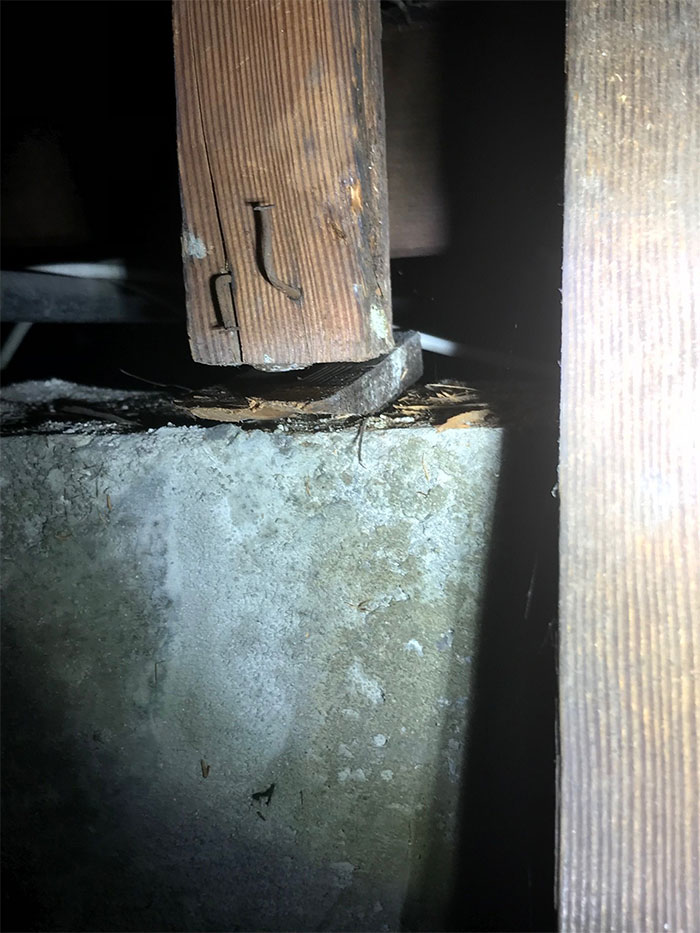 And here we have the entrance to the next level of Super Mario Bros. It doesn’t actually go through the foundation wall, though by the looks of it, that wall could be easily broken apart. The whole foundation needs to be replaced. Very brittle. 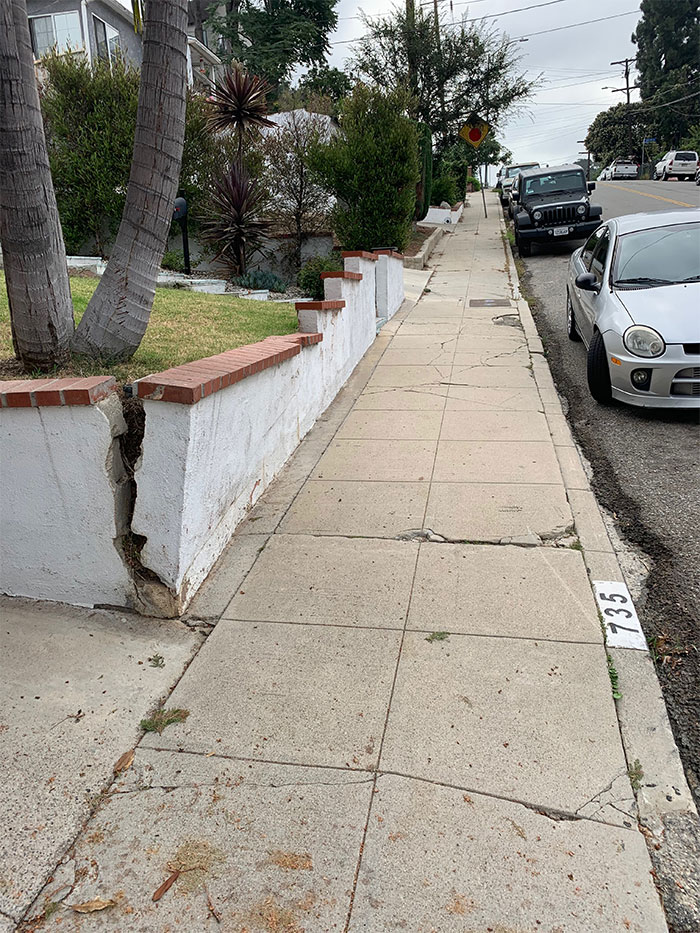 Those nails are doing a great job holding nothing together. 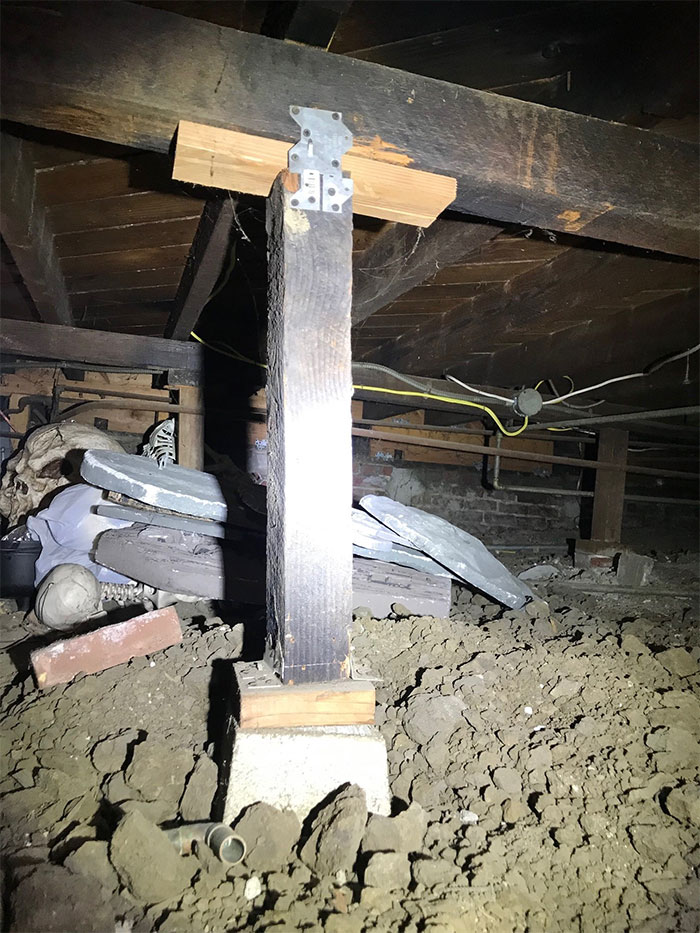 If you go around East Los Angeles, you’ll see this sort of crack in retaining walls on almost every single block. These homes in Silver Lake, East LA, Mount Washington, etc. are all on a moving land mass and when mixed with water and quakes, it makes for a good damage sandwich.

As I was thinking of what to say for this caption I forgot there was a plastic skeleton and giant skull to the left and felt any other comment besides mentioning those would be a disservice to you guys. But the post is a bit wonky too.

Would you feel safe with framing like this holding up your home? Me neither.
This is pretty common in older homes around Los Angeles. Years of water damage and those pesky termites will eventual cause some pretty bad rotting and instability. 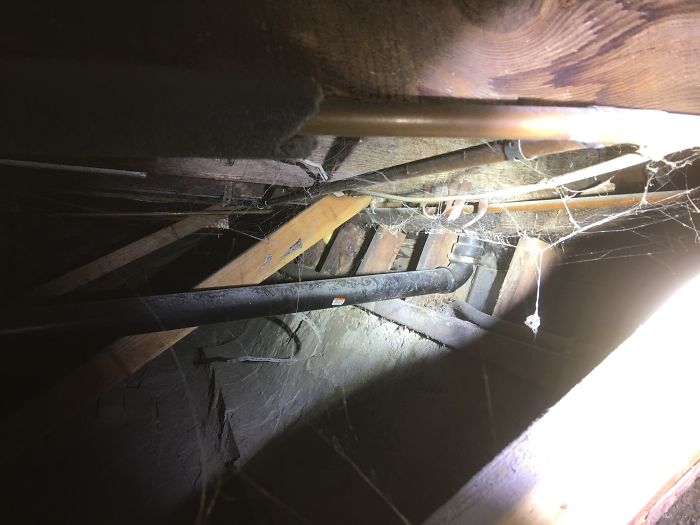 To the untrained eye, this may seem like nothing, but try and take a closer look. The entire house is leaning at a 45 degree angle. Scary stuff being under a home like this. A glass drops above and boom, that puppy drops. (not really but it is scary) 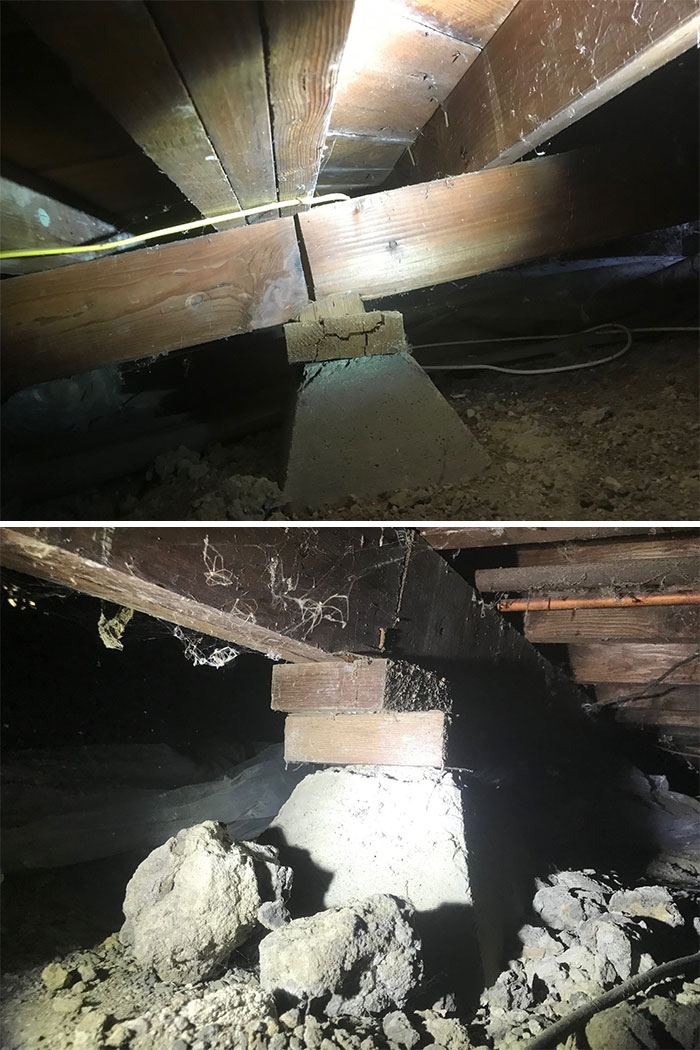 A nice little girder with no bracing. It’s also just smashing down the existing “post” and pier.
You’ll see this sort of thing all over LA. Instead of putting in a proper post, people will install random pieces of wood under a girder to help support the home. The problem with this is that it’s almost never braced and the wood used is often untreated. They rot much faster than most pieces. I’ll also add that this doesn’t necessarily compromise the structure.