Growing up during the Cold War, the Soviet Union wasn’t just the Evil Empire – it was the Enigma Empire. It’s hard to imagine how such a massive nation could be so well shrouded in mystery, but we knew little about what went on behind the Iron Curtain.

We’d get a glimpse of their athletes every four years, and we could count on Rocky to out-box Ivan Drago, but other than that, we managed to build up a healthy distrust and fear of the Soviets that, when you get right down to it, was just a fear of the unknown. Of course, it didn’t help that the Soviets didn’t want us to know anything about them.

That Soviet legacy survives well into the 21st century, even after the USSR’s collapse and everything that has come to light since then. But the Soviet Union’s legacy shows up in more than just purposeful obfuscation.

It’s marked all over the land, in its architecture and its monuments and even the way cities are designed. And for the citizens of Mirny, there’s one great big reminder of the Soviet Union’s single-minded drive they’ll never be rid of.

As if citizens of Mirny, Russia, didn’t have it bad enough living through Siberian winters, they also have an unbelievably massive hole right in their backyard.

That hole is the abandoned Mir Diamond Mine, the second largest man-made hole on the planet, and it was a powerhouse in the former USSR. 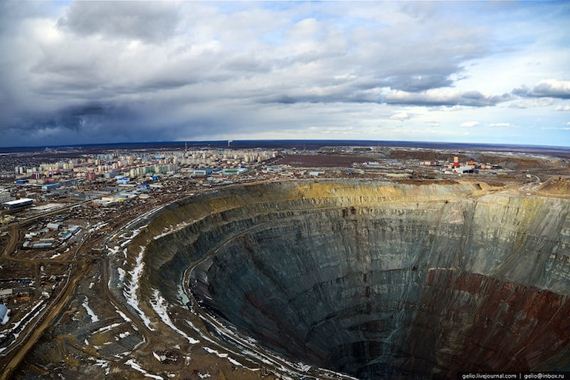 How big is Mir Diamond Mine? Well, airspace over the pit has been closed because the downward force has been known to drag helicopters out of the sky.

It’s so big, it can be seen from space. 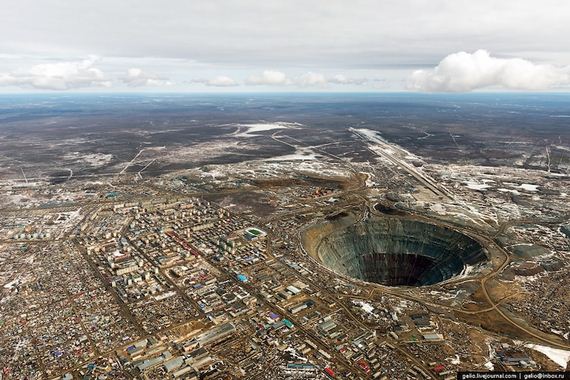 If you think Siberia is an odd place for such a huge diamond mine, you’re not alone. At its height, it attracted the attention of diamond giant De Beers, who didn’t think it should be possible to produce as many gem-quality diamonds as it did.

But it had to be productive to make operating a diamond mine so close to the Arctic Circle worthwhile. For many months of the year, digging is impossible. It gets so cold that rubber and steel will freeze and shatter. Even the oil in machines froze. Engineers had to use jet engines to melt the permafrost so they could get at the soil. When it was too cold for jet engines, they turned to dynamite. 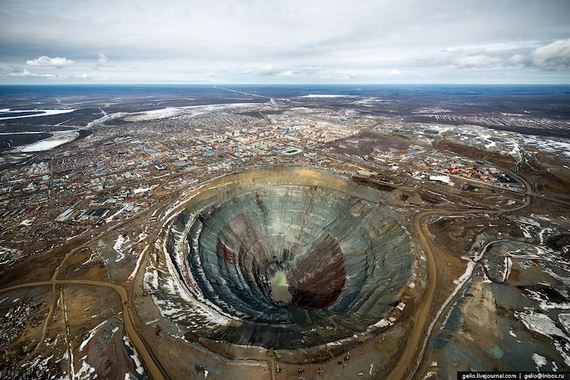 The Mir mine is a testament to the Soviet Union’s desperation and determination – and its pervading air of mystery.

In the ’40s, the Soviets needed diamonds for both cash and industrial uses, like drill bits. So Stalin dispatched teams of geologists, who turned up startling results in Siberia – results that didn’t match De Beers’s own surveys. 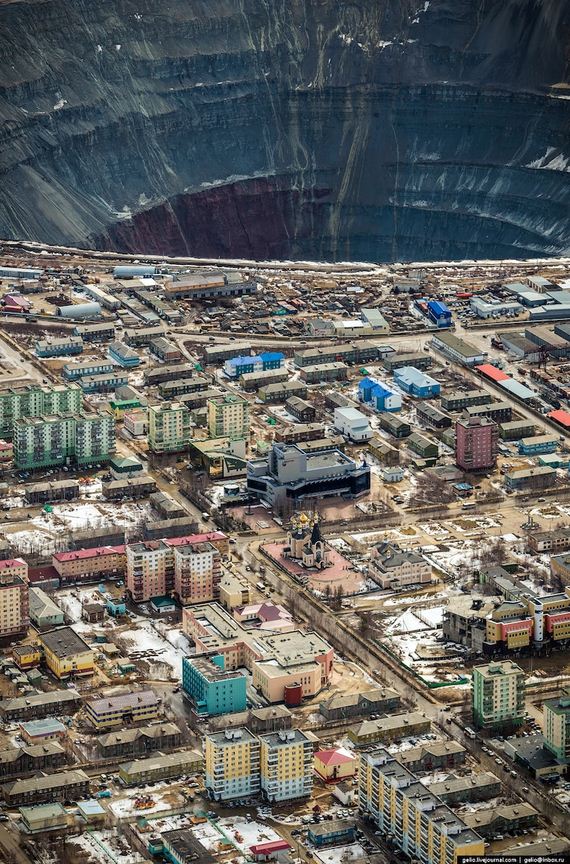 Mir Diamond Mine opened in 1957 and by the early 1960s, diamonds had become the Soviet Union’s largest Western-world cash export.

Mir broke all the rules, to the point that it rivaled even South Africa’s diamond production, putting out gem diamonds of a uniform size and shape that came to be called “Silver Bears.” And how the Soviets managed to do it – without a reduction in quality over the years – had De Beers stumped. 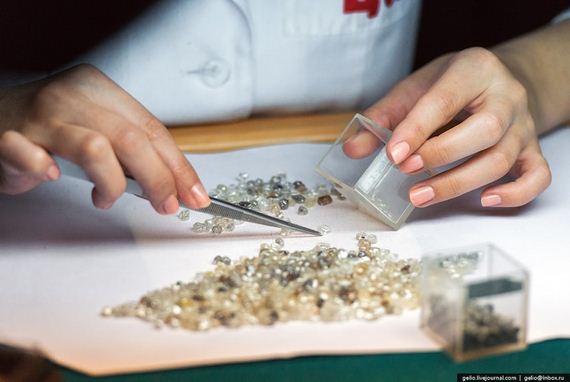 In 1976, De Beers arranged for a tour of the Mir facility. However, in typical Soviet fashion, the authorities stalled repeatedly, until the folks from De Beers had so little time left on their visas that they would only be able to take a 20-minute tour.

Clearly the tour shed no light on the mystery. Worse, De Beers was forced to purchase the Soviet diamonds out of fear that they would flood the market and drive the price down. 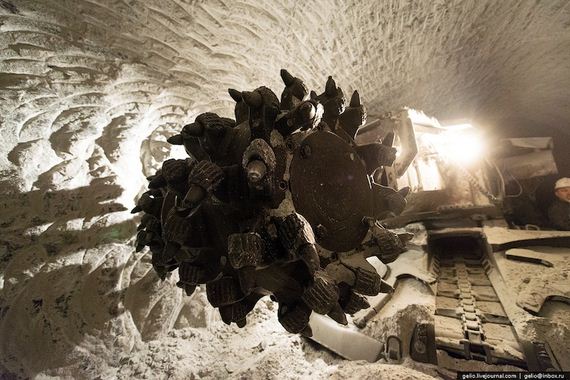 Mir officially shut down in 2004 and the mystery was never solved. But the mine’s scar upon the land remains, as do the 37,000 residents of Mirny, the town that sprung up around the mine.

And people still dig diamonds out of Mir’s permafrost, to the impressive tune of more than 4,000 pounds a year. 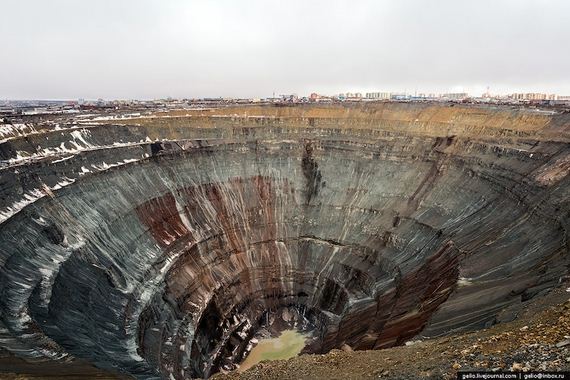 It’s still hard to imagine how anybody can live so close to such a large, deep hole.

Would it ever become “normal”? It seems to be in Mirny – or maybe it’s just normal for Siberia. 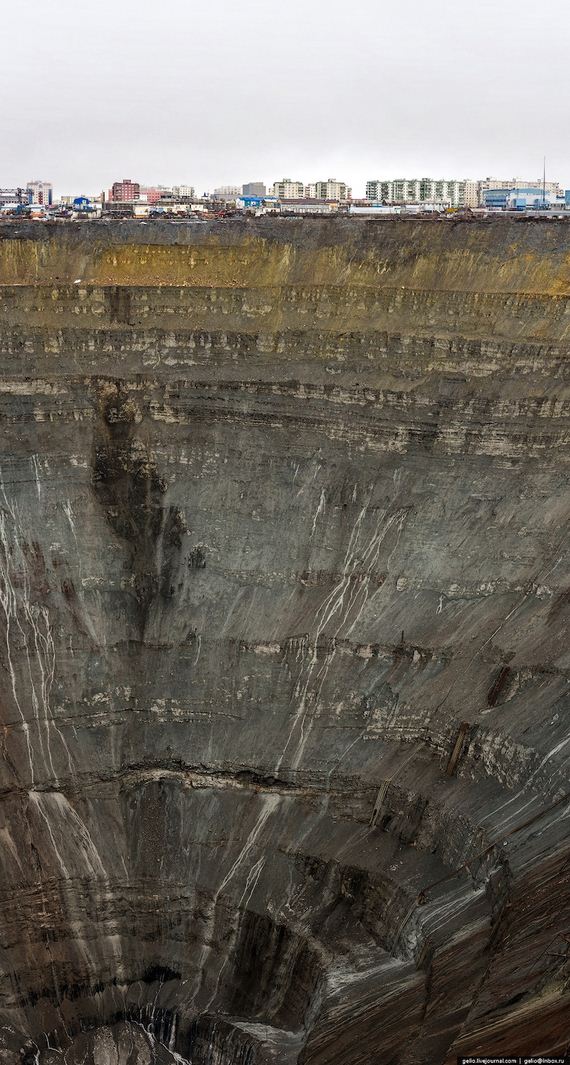