Home » Did you know that A woman tried to use a fake million dollar bill to buy $1,675 worth of merchandise at Wal-Mart and

It’s all of our dreams to be a millionaire, and be able to walk into a shop without a real care about spending a few thousand dollars on a new watch, or a nice new car, and Alice Pike had obviously dreamt of this so much, she made it become true. 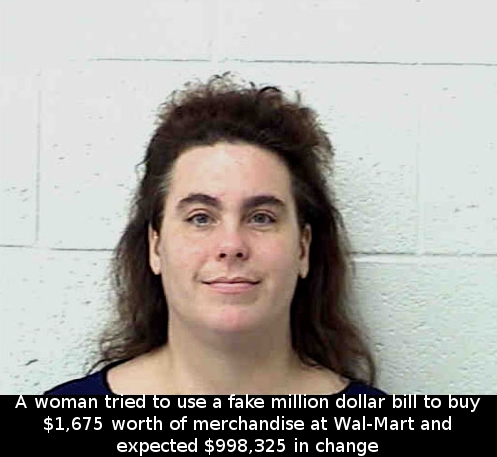 Alice Pike was in a Wal-Mart store in Atlanta, when she wanted to buy products worth $1,675 at the store. Apparently it was all just an innocent misunderstanding though because she thought the bill was real.

Whilst she was trying to purchase these goods with a couple of gift cards for the store, the sum on them was only $2.32 – a little shy of what she owed. However, her, $1,000,000 bill is massively over the amount!

Although one might think it’s glaringly obvious that $1,000,000 bills do not exist, Alice Pike, speaking from her jail cell, has an explanation:

You can’t keep up with the U.S. Treasury.

She was arrested at the store last week, and it’s emerged that you can buy this bill from novelty stores, and it was a gift from her husband, despite them no longer being together, and so she thought she’d try it out.

Whilst prosecutors must now decide whether or not to charge her with forgery, she is obviously pleading guilty to this, saying that she honestly wasn’t trying to pass it off as real. I’m not sure whether I believe her, but can you really think that a bill of that size is real!?

Just think though, if the store clerk had accepted it, he would’ve been asked a lot of questions at the bank as he tried to scrape together $998,325.