It’s definitely no secret that Vin Diesel and Paul Walker shared a strong bond, some would say a brotherly relationship.

Shortly after Paul Walker’s deadly car crash in 2013, Diesel announced that his new daughter would be named after his co-star and great friend Paul Walker. His daughter’s name is Pauline. 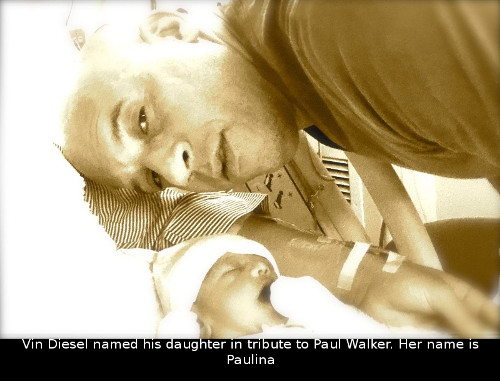 Diesel has said that whilst cutting the umbilical cord, he could not think of anyone else, and it was as if he was in the room.

He was there in the room with me. I just could tell.

It was shortly after the death of Paul Walker that Diesel revealed how strong his friendship with Walker was.

I have many friends, and a big family, but I guess you could say that my fondest, and strongest relationship was with Paul Walker. This is due to us starting together as nothing, fifteen years ago, and we had much more freedom. Over the 15 years or so, we grew together and distanced ourselves more and more as the fame grew.

Paul Walker will continue to live on with Diesel every time he calls his daughter.

This is now Paloma Jimenez’s and Diesel’s third child. Their other children are Hania Riley who is 6 years old, and Vincent Sinclair who is 4 years old.

Although Pauline will definitely not be heading to the cinema to see the newly released Fast & Furious 7, undoubtedly she will watch that, and all the previous films, hearing all the stories from Diesel about their great friendship, and the filming on set.