Home » Did you know that An Indian company claim to have made the cheapest smartphone in the world, priced at less than…

Have you ever wondered how much does the cheapest smartphone on the planet cost? The answer is $4 and the smartphone in question is called Freedom 251. 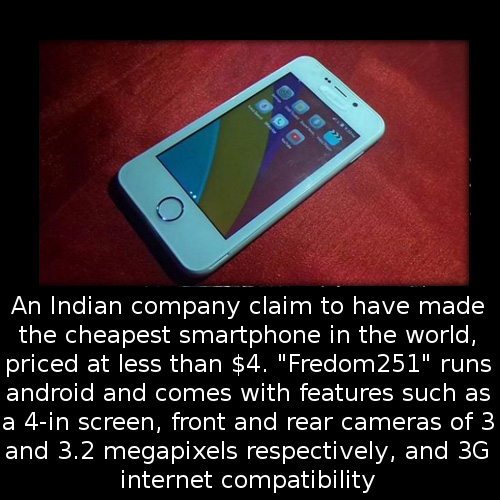 Instead of paying thousands just to get your hands on the newest mobile phone devices and the coolest features, you can have a fully functioning smartphone for as little as $4.

An Indian manufacturer, named Ringing Bells, is making headlines for its ground-breaking product – a device, which has been dubbed the world’s cheapest smartphone. The phone in question is called Freedom 251 and the idea behind it has nothing to do with becoming the new iPhone hit substitute. Since India is the second-largest phone market, but the country is filled with tons and tons of poor areas where people can’t afford to rely on telecommunication, Freedom 251 is aimed at improving India’s telecom subscriber levels. The product aims at offering an affordable mobile service for people, who are residing in India’s poor areas and living in extreme poverty. Regardless, official reports coming from the company standing behind this unbelievably cheap product, claim that the phone will be shipped for mass production even outside India.

A spokesperson for Ringing Bells stated that the company believes Freedom 251 will be able to “bring a revolution in the industry” and will succeed in a market that is already filled with super cheap knock-outs of popular smartphone brands. Ringing Bells also believes that their product will be able to help more people residing in poverty connect through this extremely cheap smartphone. Ringing Bells’ smartphone will supposedly be sold for less than 500 Indian rupees. It will run on Android OS and will feature a 4 inch touch screen, 3 megapixels front camera, 3.2 megapixels rear camera, and will also be compatible for 3G networks.