On January 31 skywatchers are in for a triple delight as the second supermoon of the month, also a blue moon and will experience a total lunar eclipse 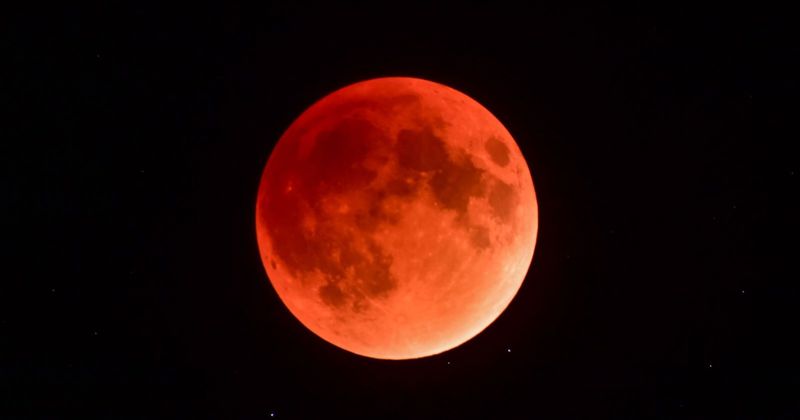 If you live in the western part of North America, Alaska, and the Hawaiian islands, you might set your alarm early the morning of Wednesday, January 31 for a lunar trifecta: a pre-dawn “super blue blood moon.”

We seem to be in the middle of an astronomical delight in the very first month of the year, as reported earlier. The January 31 full moon is special for three reasons: it’s the third in a series of “supermoons,” when the Moon is closer to Earth in its orbit and about 14 percent brighter than usual. 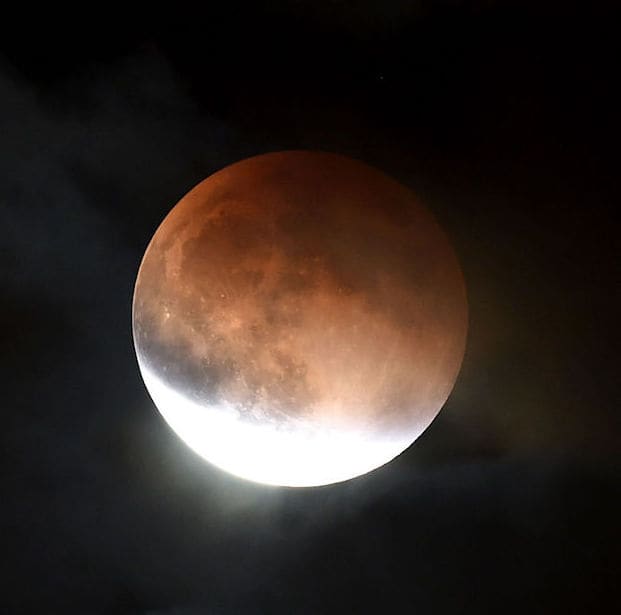 It’s also the second full moon of the month, commonly known as a “blue moon.” That’s where the evocative phrase ‘once in a blue moon’ comes from. Although blue moons are not all that rare (they occur almost every 2.7 years), this January 31 will be a special occasion for an additional third reason. The super blue moon will pass through Earth’s shadow to give viewers in the right location a total lunar eclipse. An eight per cent partial eclipse on December 31, 2009, but the last total eclipse of a Blue Moon happened all the way back in March 31, 1866.

The lunar eclipse on Jan. 31 will give a team of scientists a special opportunity to study the Moon and help us learn more about it as #NASASLS prepares for deep-space missions to the Moon, Mars and beyond! >> https://t.co/JGaEglNHE2 pic.twitter.com/R6FdbblhFe

But contrary to the naming convention, a blue moon does not appear blue at all and has noting to do with the color. But there is something special about the color of the moon on the upcoming special day for our dear and only natural satellite.

While the Moon is in the Earth’s shadow, it will take on a reddish tint, making it a “blood moon.” Here’s how you can get the best viewing experience: 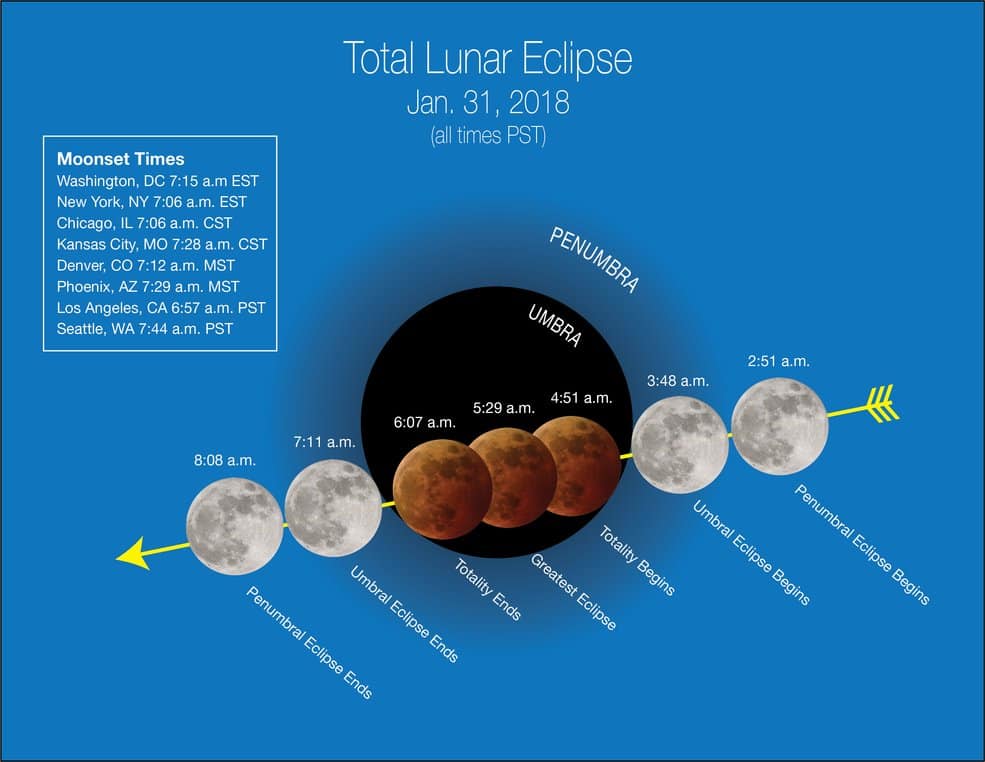 “For the (continental) US, the viewing will be best in the West,” said Gordon Johnston, program executive and lunar blogger at Nasa Headquarters in Washington. “Set your alarm early and go out and take a look.”

“Weather permitting, the West Coast, Alaska and Hawaii will have a spectacular view of totality from start to finish,” said Johnston. Skywatchers on the West Coast of the United States will see the lunar eclipse begin at 3:48 am PST. Totality will start around 4:51 am PST and last until 6:05 am PST. Viewers in this area as well as skywatchers in Alaska, Australia and eastern Asia will experience the lunar eclipse from start to finish, as long as it isn’t a cloudy morning, according to the statement. 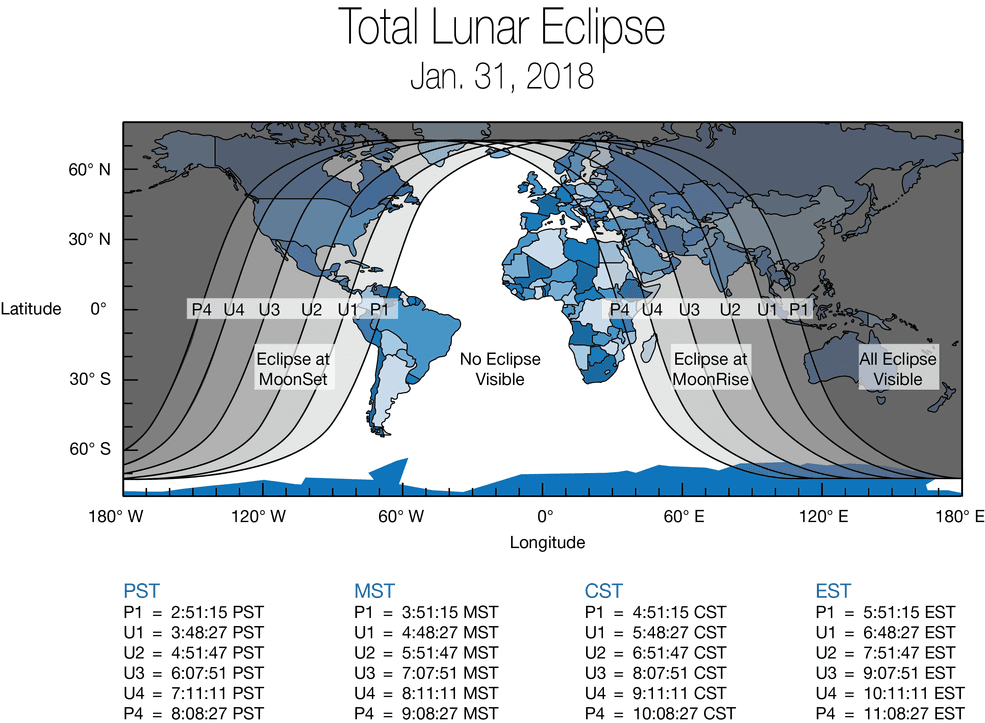 “Unfortunately, eclipse viewing will be more challenging in the Eastern time zone. The eclipse begins at 5:51 am ET, as the Moon is about to set in the western sky, and the sky is getting lighter in the east.”

“So your best opportunity if you live in the East is to head outside about 6:45 am and get to a high place to watch the start of the eclipse—make sure you have a clear line of sight to the horizon in the west-northwest, opposite from where the Sun will rise,” said Johnston. 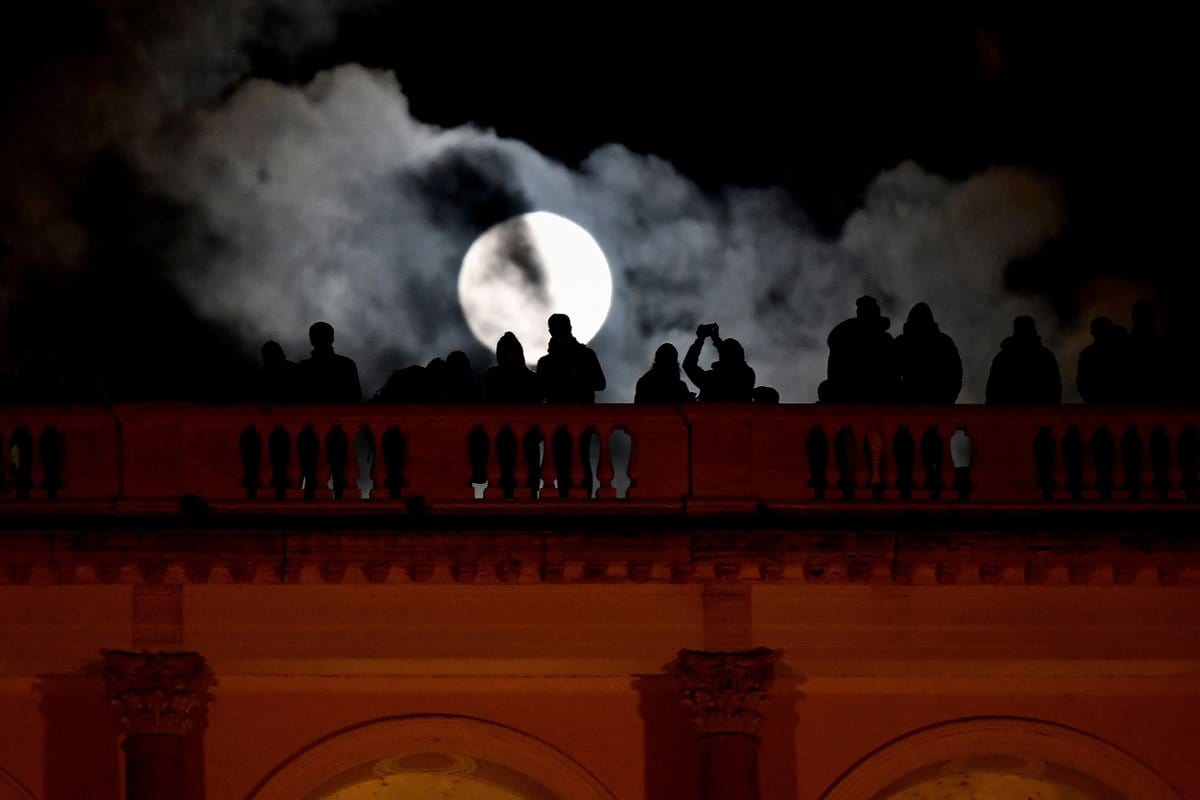 Viewers in the Central Time Zone may have a better opportunity than those on the East Coast. The lunar eclipse will begin around 4:51 am CST, when the moon is higher in the sky. At this time, the moon will pass through the lighter part of Earth’s outer shadow, or the penumbra. The moon will appear to be a blood-red color to viewers around 6:15 am CST, and the view will remain clear for a full 45 minutes until 7 am CST, when the sun rises, according to the NASA statement.

“So if you live in Kansas City or Chicago, your best viewing will be from about 6:15-6:30 am [CST],” Johnston said. “Again, you’ll have more success if you can go to a high place with a clear view to the West.” 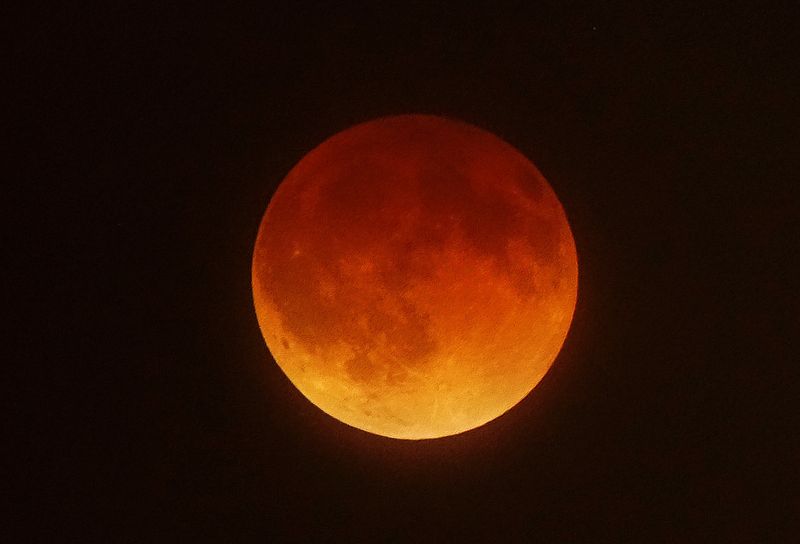 A 2014 lunar eclipse with a distinct red glow, as seen from Southern California. (Image Source: Twitter)

The lunar eclipse will begin in the Rocky Mountain region around 4:48 am MST, as the darker part of Earth’s inner shadow blankets the moon. Viewers in this area will see the eclipse peak around 6:30 am MST until 7 am MST, when the moon will set, according to the statement.

BREAKING: a #BlueMoon and total #LunarEclipse haven't occurred simultaneously in the US since 1866. Throw in a simultaneous #SuperMoon, and #astronomy history will be made on January 31st. https://t.co/gotPFndJRM
The Truth Is Up There…#NASA #space #science #alignment

Though a supermoon does appear slightly larger in the sky than a full moon that takes place when Earth’s lunar companion is farther away from us in its orbit, the difference is nearly impossible for most skywatchers to notice because the moon is so bright and the maximum possible difference in the moon’s apparent size is small (only about 14 percent), according to Nasa. But the eclipse and the blood moon promise to be a visual delight for viewers who have a clear view of the sky at the right time. 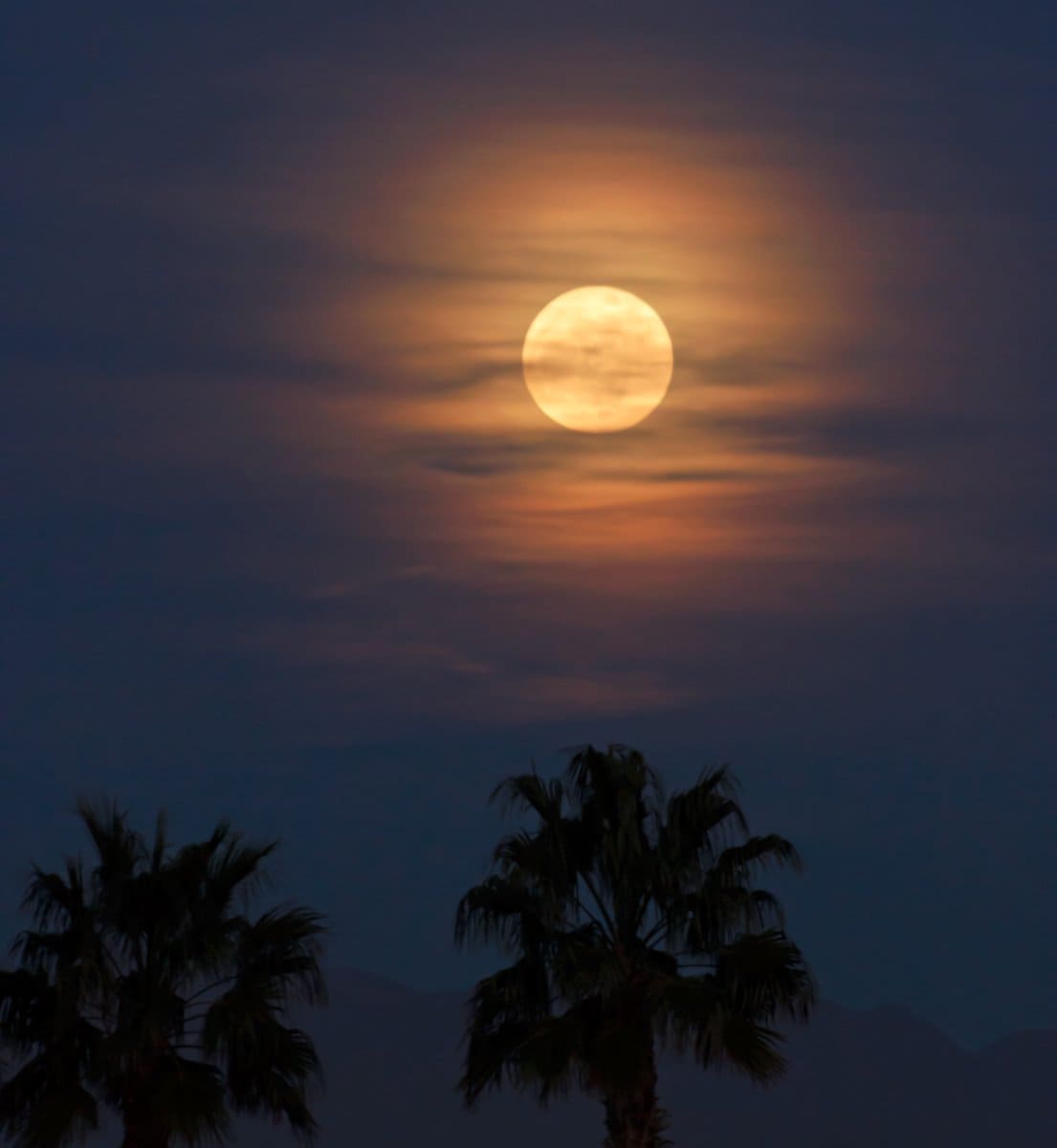 Unlike solar eclipses, which are only visible from specific places on Earth, lunar eclipses are visible from anywhere it is nighttime. Lunar eclipses don’t occur every month because the plane of the lunar orbit is slightly tilted relative to the plane of the Earth’s orbit, so the Earth, sun and moon don’t always line up to put the moon in Earth’s shadow. For the January 31 lunar eclipse, viewers in some places will not be able to see the entire event because it starts near moonrise or moonset. This includes skywatchers on the East Coast.

People in eastern Europe and western Asia will see something like a mirror image of the eclipse that observers in the Americas will see, because instead of occurring near moonset, the eclipse will start before the moon rises, reports Space.com.

Viewers in Moscow will see the moon make a dramatic entrance as it rises while it is still red and deep in Earth’s shadow. Moonrise there is at 5:01 pm local time on January 31, and the moon will reach the edge of the umbra at 5:07 pm. The moon will emerge from the dark part of Earth’s shadow at 6:07 pm.

Meanwhile, in India, the moon will rise at 5:55 pm local time and will be fully covered by the umbra at 6:21 pm, so it will turn red just as it reaches about a half a hand’s width above the eastern horizon.

If per chance you happen to be living in one of the regions where you can’t see the moon in all its glory on the last day of the month, you could always tune in to Nasa website and watch a live stream of the event in Full HD. Thank you, internet!