The team of photographer Holly Falconer and stylist Kylie Griffiths is like a wishing well, in a sense that with their photo project, they have realized the dreams of a bunch of strangers and transformed them into someone they always wanted to be.
Helen

“Hi, I’m Helen, and today I’m being made into a goth. I’m doing this because I’ve always wanted to rebel and see what it’s like to look different in public. Goths are normal people, too. Also, I want to be able to wear outrageous makeup for a day.” 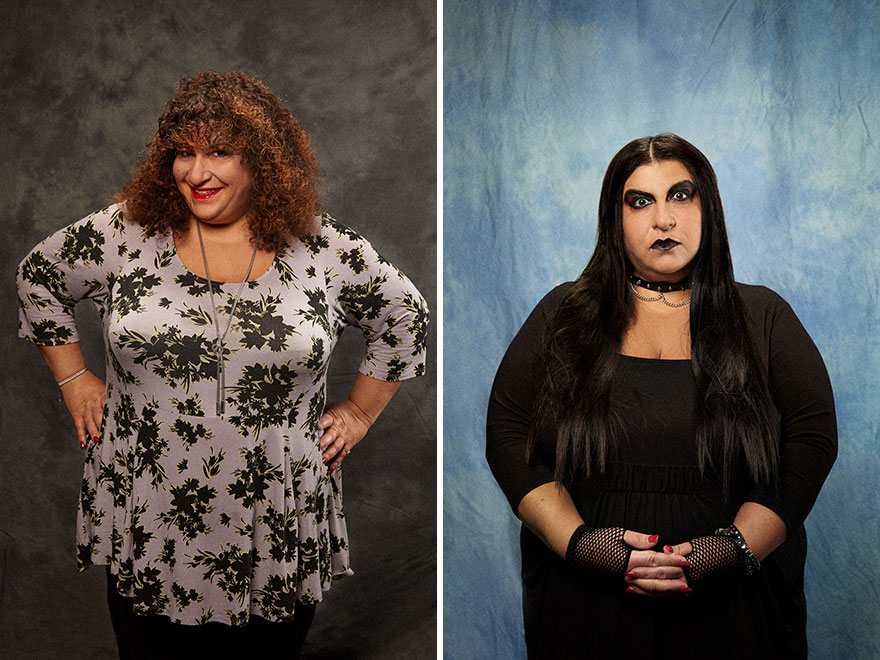 John, 24: She looks cool, like the hippie mother who’d make peppermint tea and let you and your mates smoke weed. I like the makeover too, though – she’s expressing her inner anger.
Ellie, 26: She can pull off goth really well.
Sarah, 31: That is terrifying.
Elouise

“My name is Elouise, I’m 22 and I’m being tattooed all over. I’m doing this because I’ve always wanted loads of tattoos and once, when I was younger, I got a tattoo of Buddha on the back of my neck and it looks like a steaming poo, so I decided not to get another tattoo after that.” 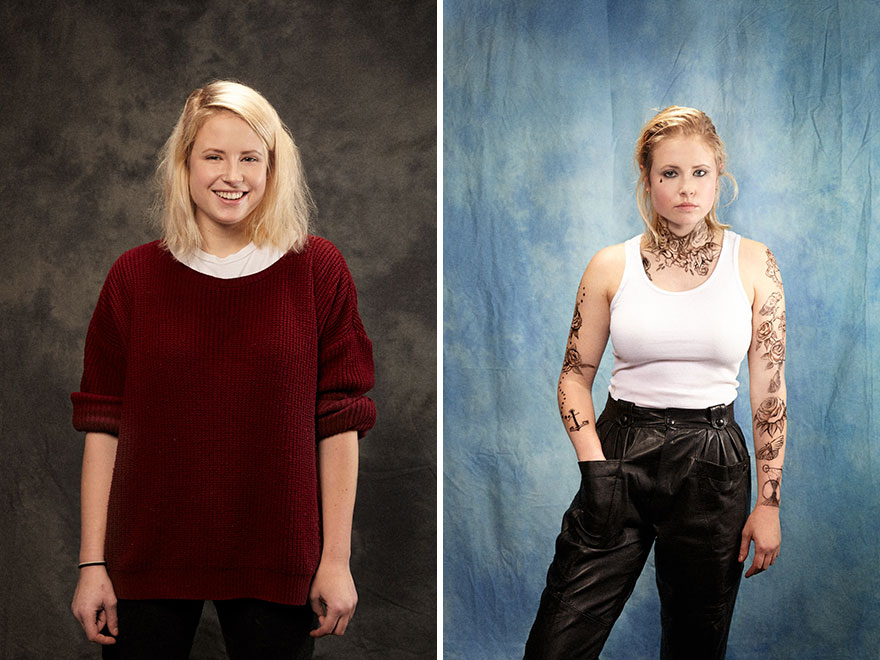 John, 34: Tattoos – yeah, I love that. She’s expressing herself. I offer spiritual consultancy – I work with energy – and I think that’s important.
Julienne, 26: I love this one – she looks like an East London lesbian.
Stuart, 22: She looks good in both. The one with tattoos I’d like to be my friend
Ken

“My name is Ken. I want to be a Star Trek fan because I’m a really crazy guy and I really like Star Trek, and I just want everyone to know I love Star Trek and I’m crazy!” 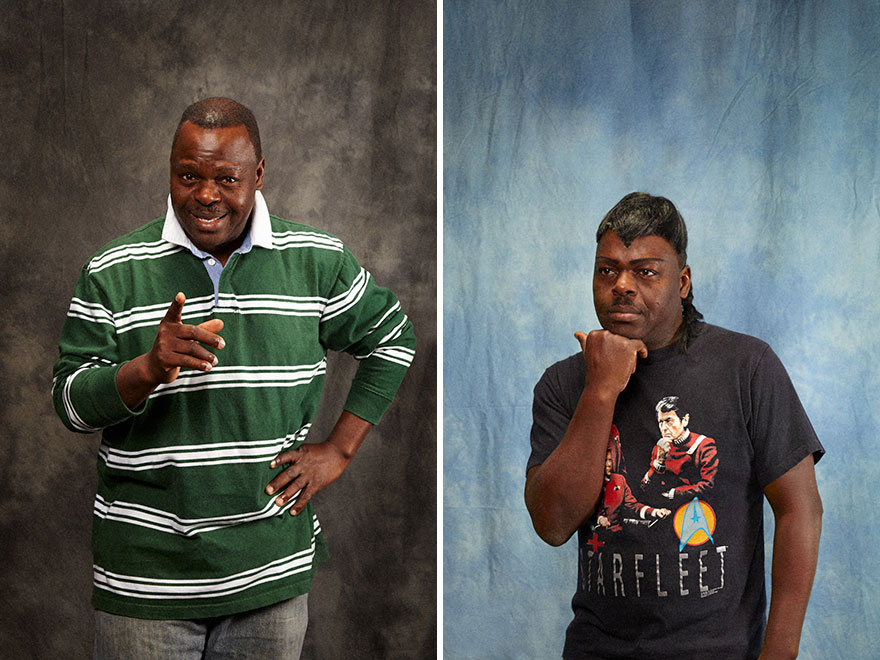 Fabien, 26: I live in East London and I think people with a special look are better than normal people, so I’ll go for Star Trek.
Julia, 23: The post-makeover is too old school to be true. I like him as he normally is.
Alex, 22: He just looks like an idiot.
Iris

“I’m Iris, I’m 27 and I’m being turned into a human doll. I always wanted to be a doll when I was younger. I wanted to live in a big pink doll house and dress like a doll, so I’m here to have my dreams made true!” 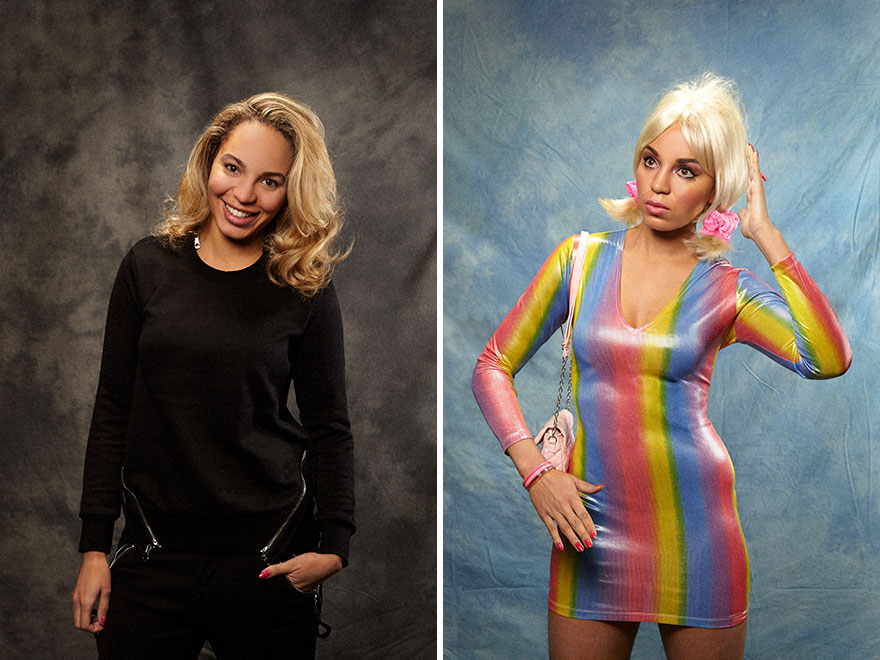 “My name is Melanie and I’m 32. I’m being turned from a woman into a man. I’m doing this because I feel like men represent power and strength, and I’d really like women to feel powerful and strong, which is why I’m becoming a man for a day.” 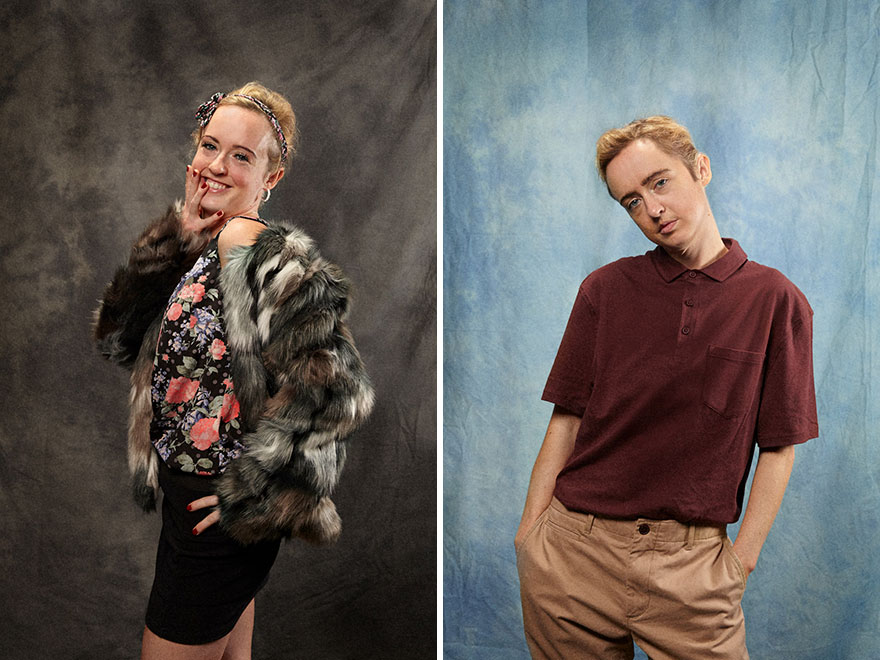 “I’m Tabitha, I’m 29 and I live in London. Today, I’m being made into a drag queen because I’ve always liked things that are quite over the top. I’m still thinking of my drag queen name, so I’ll have to get back to you on that.” 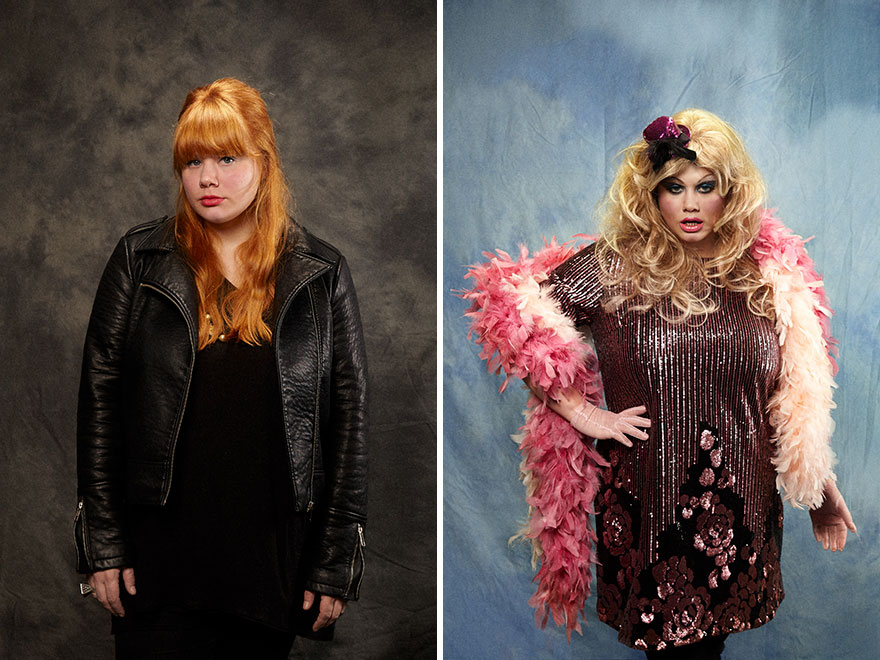 Stavros, 21: Transvestite all the way. I love a drag queen.
Paula, 25: I love the second look – she’s such a diva.
John, 34: She’s not limiting herself. I think it’s important to express your sexuality, and she’s obviously doing that, so it’s cool.
Faye

“My name is Faye. I’m 30, I live in London and I want to be transformed into a serious business woman. I want to do this because I feel like, now I’m 30, I really need to dress a bit more seriously and smart.” 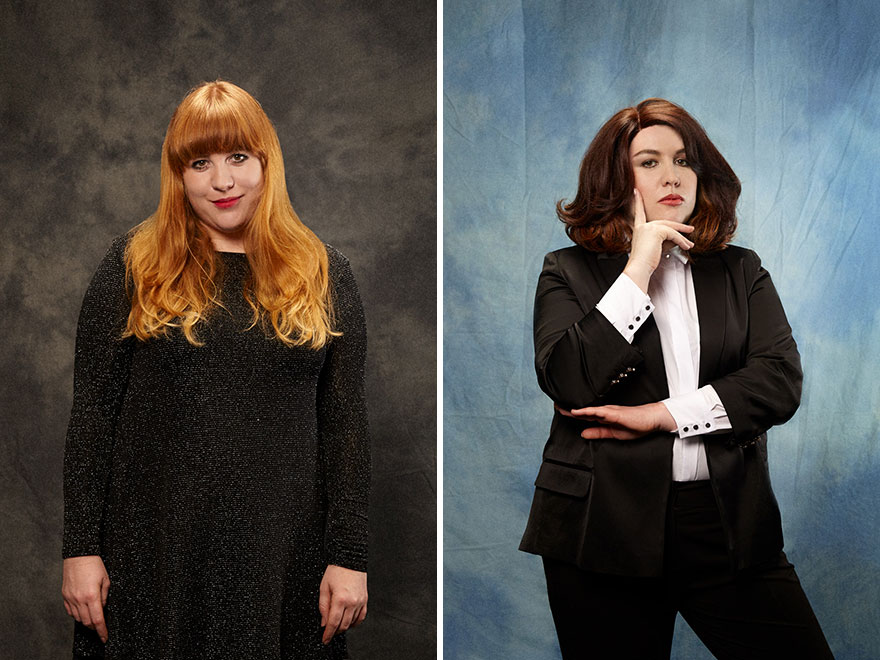 “I’m Tom, I’m 22 and I’m from Brighton. Today, I’m becoming a juggalo. The reason is because I think they look kind of weird, and I like weird, subversive faces. Also, I think the music linked to them is pretty cool.” 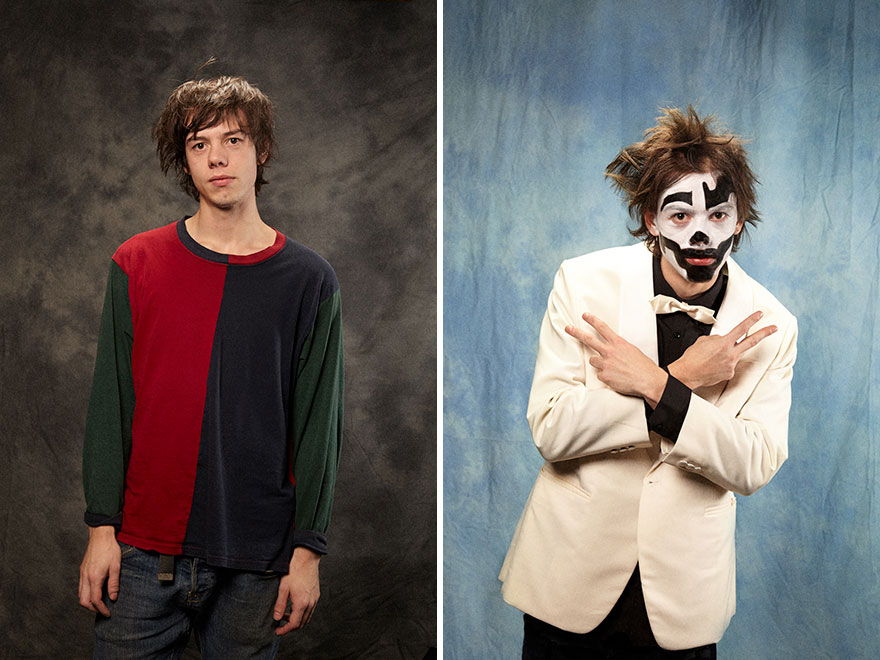 Julia, 23: I like the second one more because it has more white in it. I like white.
Stuart, 22: I prefer the second one. He reminds me of the joker. He looks quite sick.
Ellie, 26: He looks better normal. The juggalo outfit is a bit desperate, tbh. Like, what’s he doing with his hands?
Jon

“My name’s Jon, I’m 28 and I’m from Croydon. Today I’m being made into a pop star because I went to university and got a degree in pop recording and I want to be a really big pop star.” 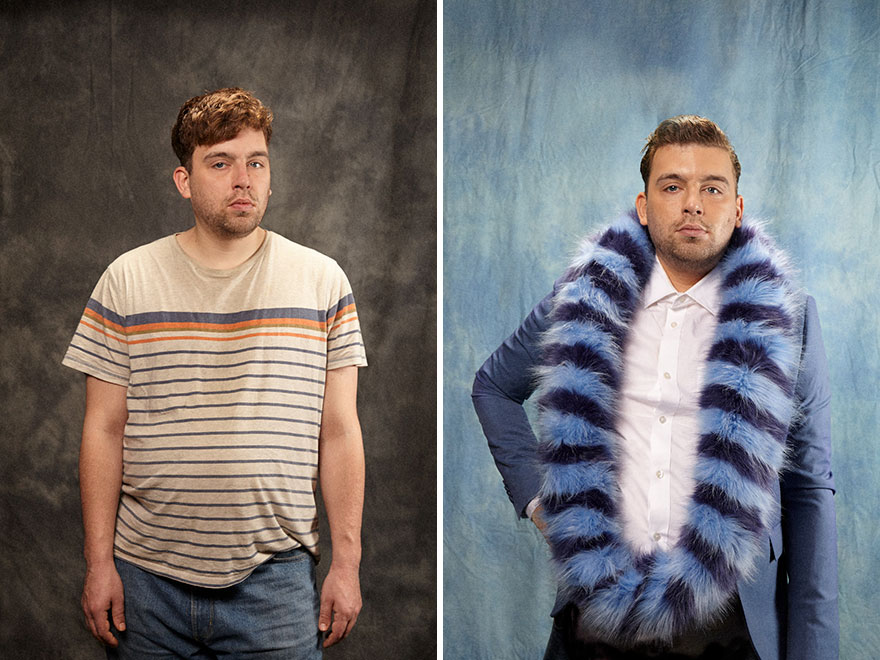 Ellie, 26: The blue one suits him better. He looks more alive.
Julienne, 26: He looks fierce.
Paula, 25: I like the fluffy thing very much.