For those who take advantage of their freedom (and unemployment) in their youth and decide to travel extensively, it’s important to document each trip. Whether it be through journals, videos, or pictures, everyone wants to capture exactly how they felt in each city they visited, so when they look back years later they’re warmed by the memories of their youthful exploration.

Many assume that this is important to document because as life goes on, the opportunities for such carefree travel will become limited. With jobs and families and whatnot, it grows harder with each passing year to make time to explore a new place. Others may feel quite the opposite, however, knowing that they will travel again one day. For these people, documenting their travels was less of an attempt to remember the places forever, and more of an attempt to see how they’ve changed upon their return. 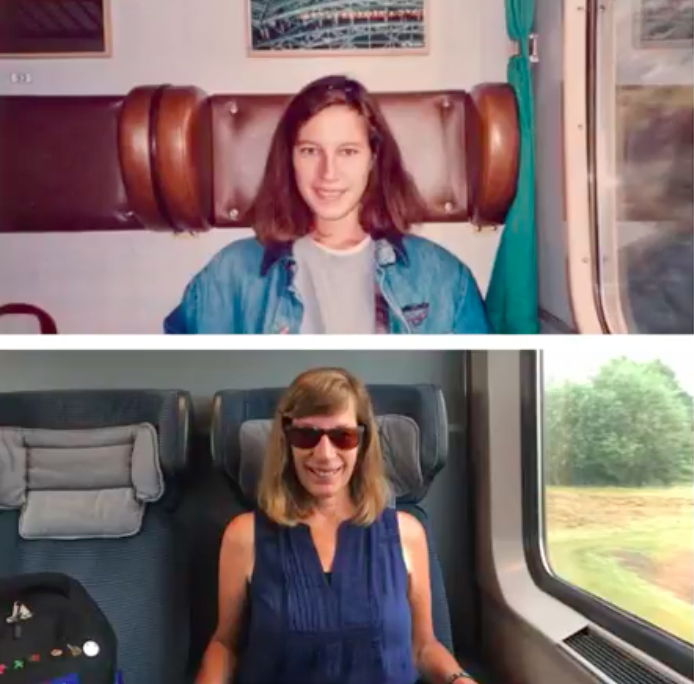 That was the case with Lisa Werner (pictured above), who decided to recreate photos she had taken abroad 30 years ago. The recreations are nearly exact, which is impressive considering how much a city can alter over the span of 30 years. Lisa posted her photographs to her blog, titling the series, “Then and Now: Same location but 30 years later.” Lisa describes how the series came to be in her post: “I just returned home to California after completing a fun photography project in Europe. I took 13 scanned old photos of me from 30 years ago and went to see if I could find the same exact locations to take photos of what I look like now. I hope to return again in another thirty years!” Check out her photos and descriptions here:

“Strasbourg, France. Due to road construction, this was as close the the same exact location as I could get.” 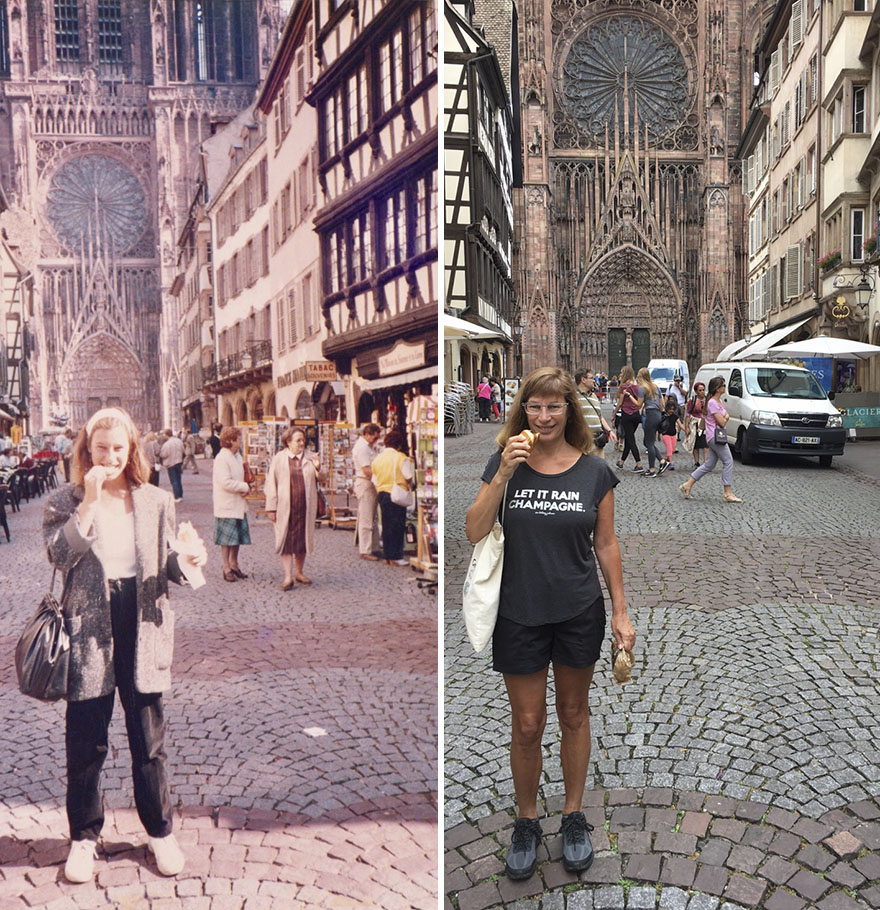 “Heidelberg, Germany. I was alone on the bridge and had to recruit a group of German students to accurately re-create the scene.” 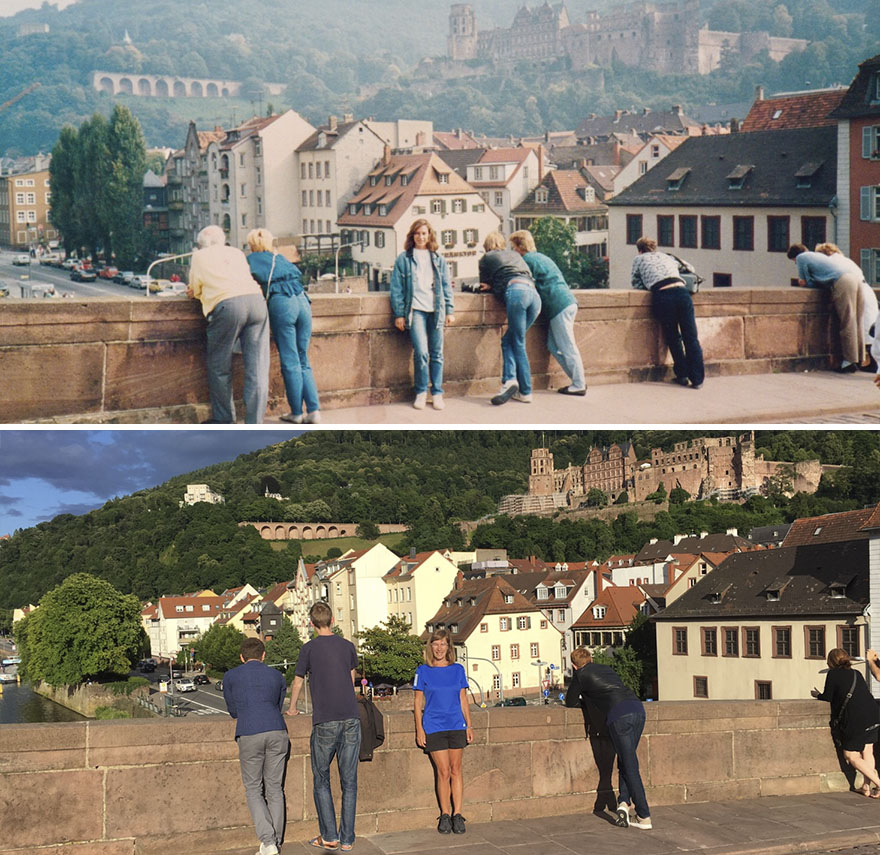 “Mainz, Germany. My iPhone logged in 20,477 steps this day, but seeing Steinberg Winery near Eltville was worth it.” 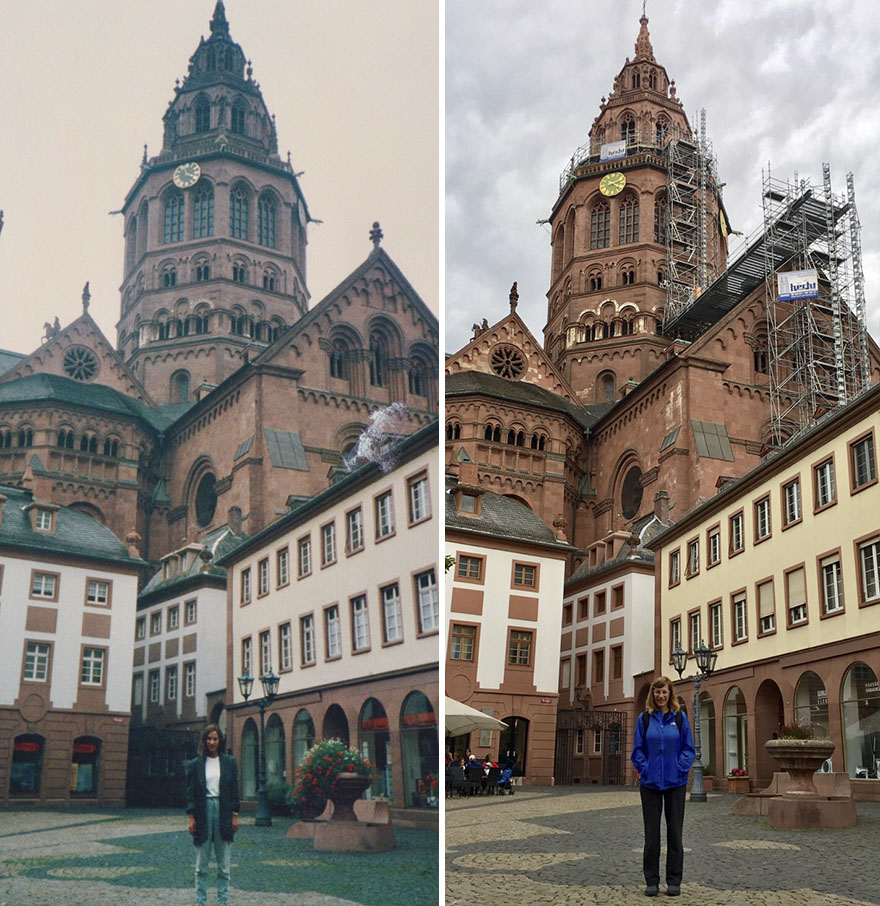 “Strasbourg, France. Notice how much that tree has grown.” 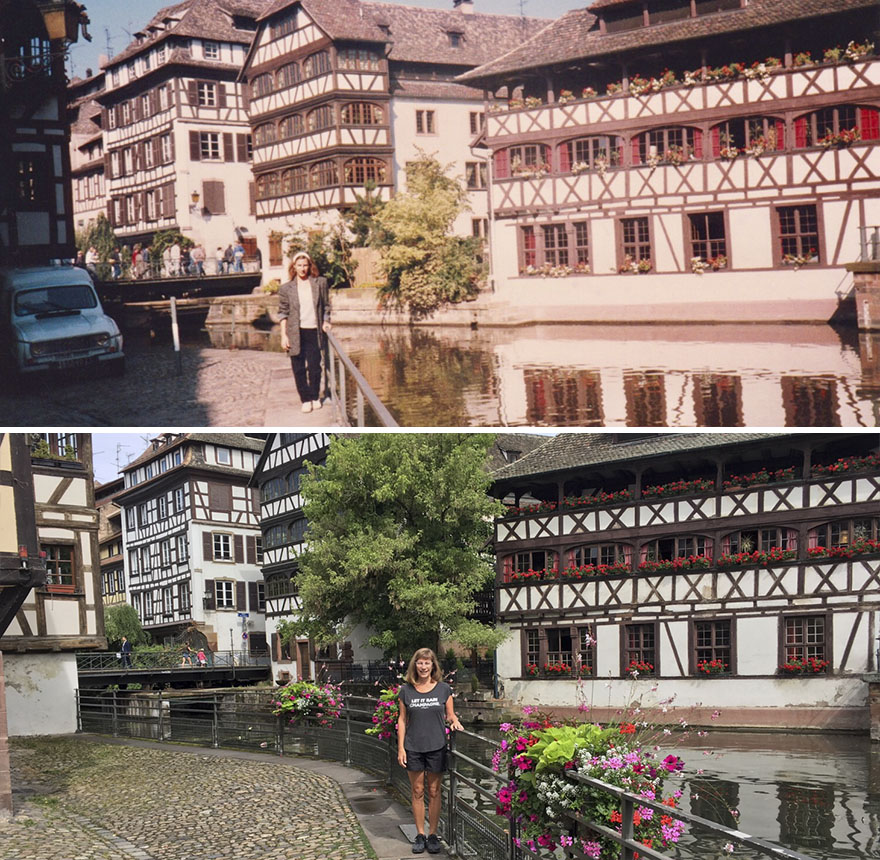 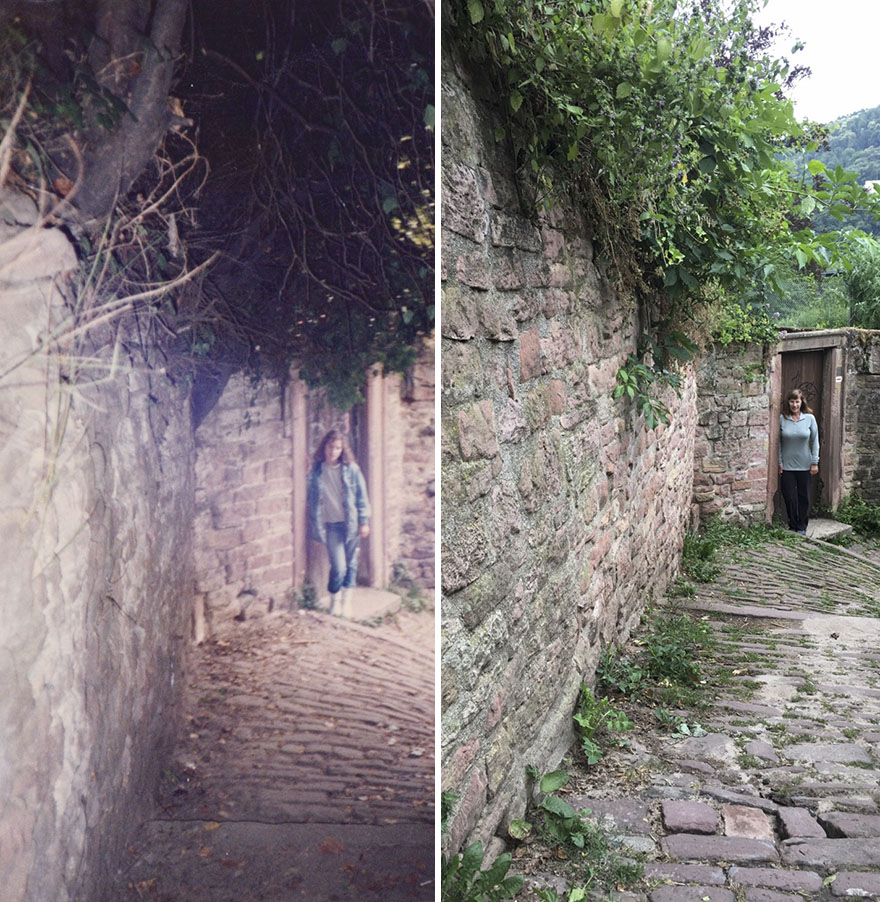 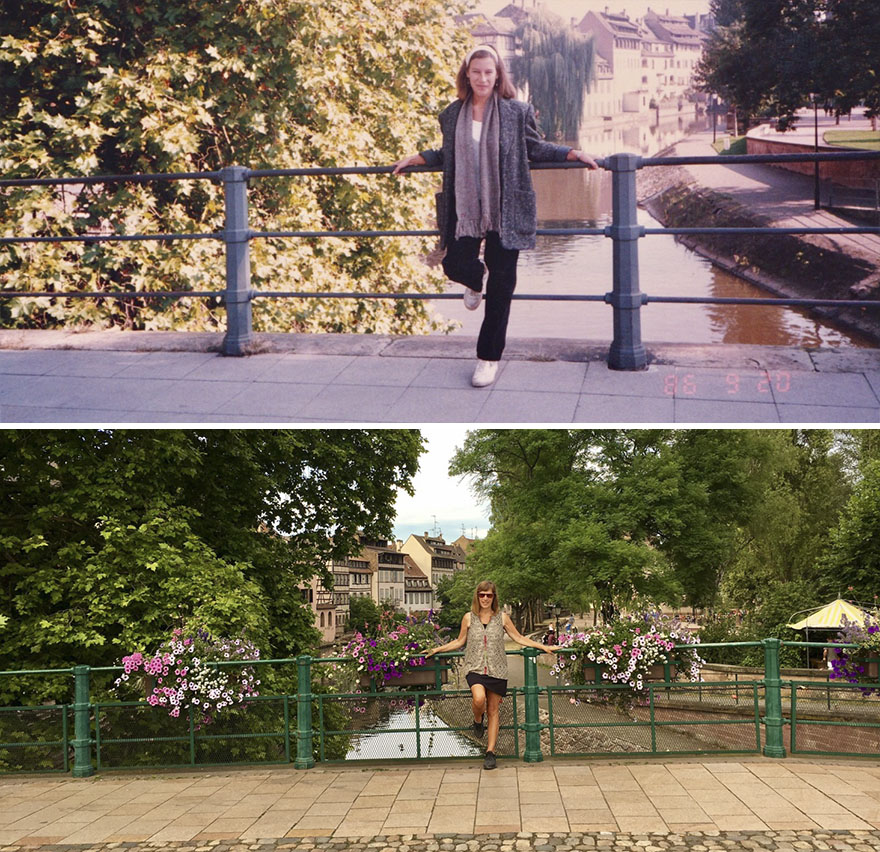 “Mainz, Germany. Scary how easily I remembered exactly where to find this sculpture.” 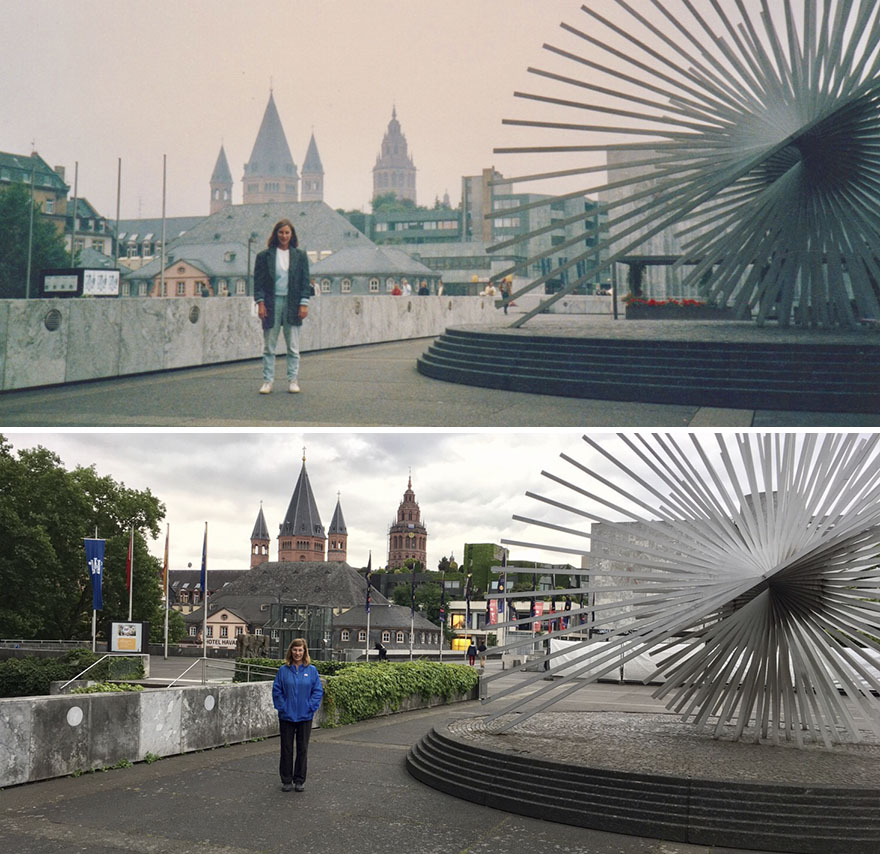 “Strasbourg, France. I was wearing a miniskirt and couldn’t mimic the pose.” 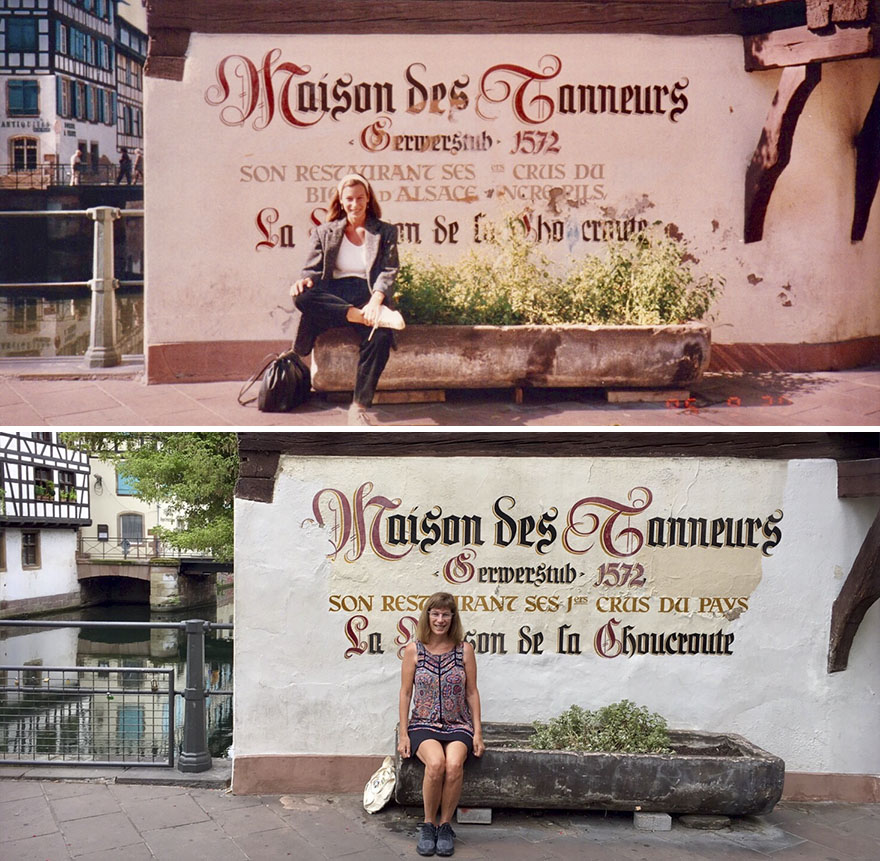 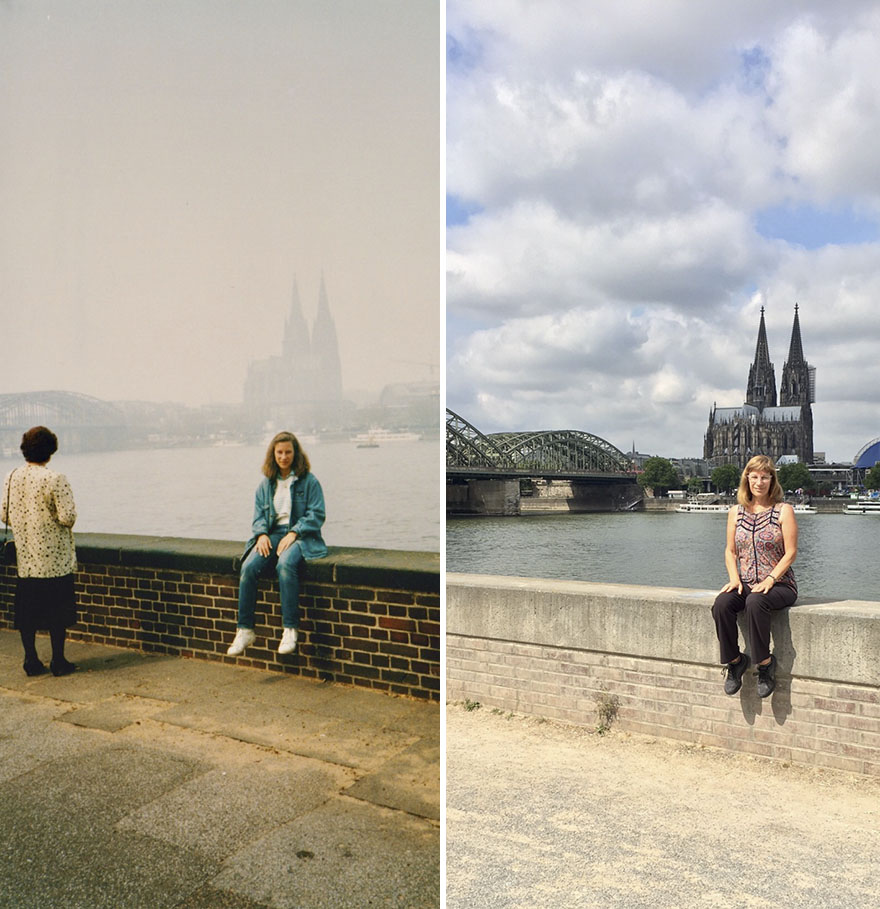 Lisa doesn’t say if she did any research to locate the backdrops of the old photos, but if she didn’t, then she has one impressive memory. It’s a shame she wasn’t able to wear the exact same clothing she had on in the original photos, although the shoulder pad trend has yet to make a comeback in 2017, so that may have proved rather difficult.