Many of you have probably heard of the Trevi Fountain in Rome, and you’ve probably seen the famous Bellagio Fountain in Las Vegas, either in person or while watching the movie Ocean’s 11.

While there’s no doubt that these are both spectacular sights to behold however, they only represent a small percentage of the incredible fountains that you can currently find around the world.

From Stockholm to Sunderland, from China to Peru, this list compiled by Bored Panda showcases some of the quirkiest, the cleverest, and the most beautiful fountains we could find. Some rotate.

Others light up. A few even seem to defy gravity. But one thing they all have in common is that they’re sure to leave you in awe. 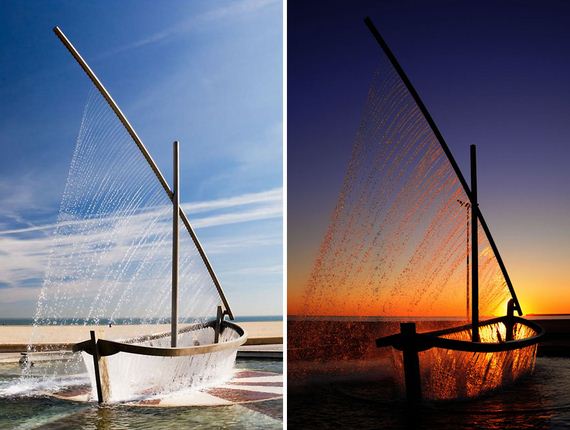 Located at Playa de la Malvarrosa in Valencia, Spain and known simply as Water Boat Fountain (or Fuente del Barco de Agua in Spanish), this sculptural fountain gives the illusion of a sailboat with jets of water. There are also other water boat fountains in Portugal and Israel. 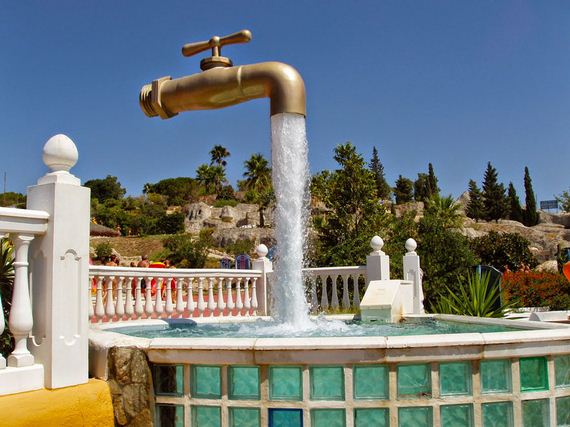 This “Magic Tap” can be found at Aqualand in Cadiz, Spain. At first glance it looks as if the tap is levitating, but upon closer inspection you’ll find that there’s actually a pipe hidden in the stream of water that’s holding up the entire structure. Still looks pretty cool though! 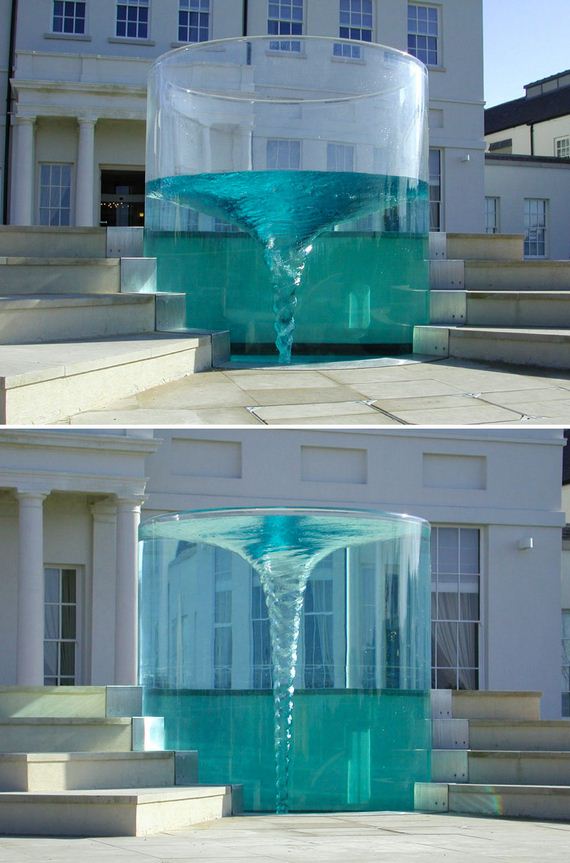 Charybdis was created by the water sculptor William Pye in 2000 for the luxury Seaham Hotel and Spa, near Sunderland in Northern England. Charybdis is the name of a siren mentioned in Homer’s Odyssey, who was hit by a thunderbolt from Zeus that transformed her into a whirlpool as harsh punishment for stealing an oxen from Hercules. Pye later built similar sculptures influenced by the story in Oman… 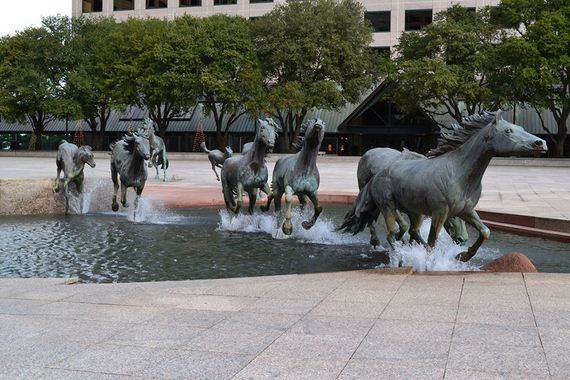 Nothing can describe how mesmerizing the water fountain at the Osaka City Station in Japan is. The attraction, located in the South Gate Building of the new Osaka Station City complex, consist of a large rectangular water fountain that displays a digital style time read out, moving floral patterns and falling shapes in the collapsing wall of water. Designed by the local firm Koei Industry, the fountain works… 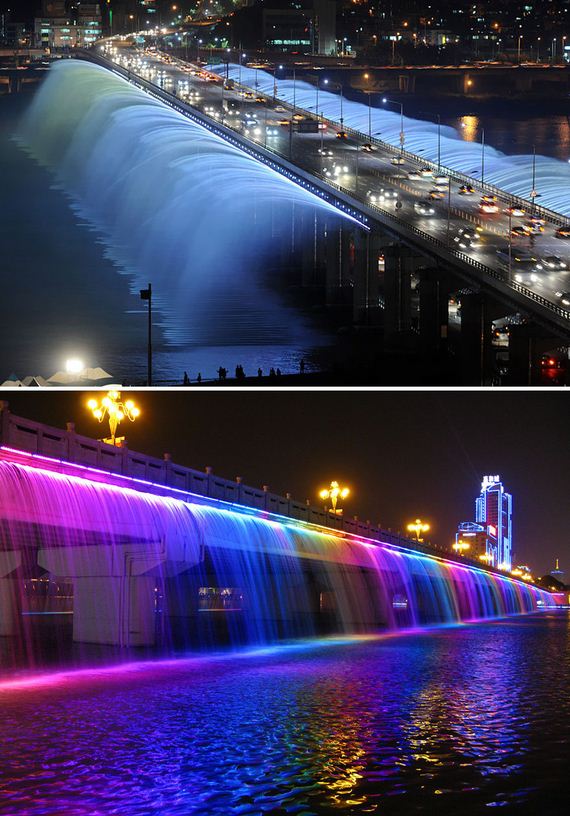 The Moonlight Rainbow Fountain is the world’s longest bridge fountain that set a Guinness World Record with nearly 10,000 LED nozzles that run along both sides that is 1,140m long, shooting out 190 tons of water per minute. Installed in September 2009 on the Banpo Bridge, former mayor of Seoul Oh Se-hoon declared that the bridge will further beautify the city and showcase Seoul’s eco-friendliness, as the water… 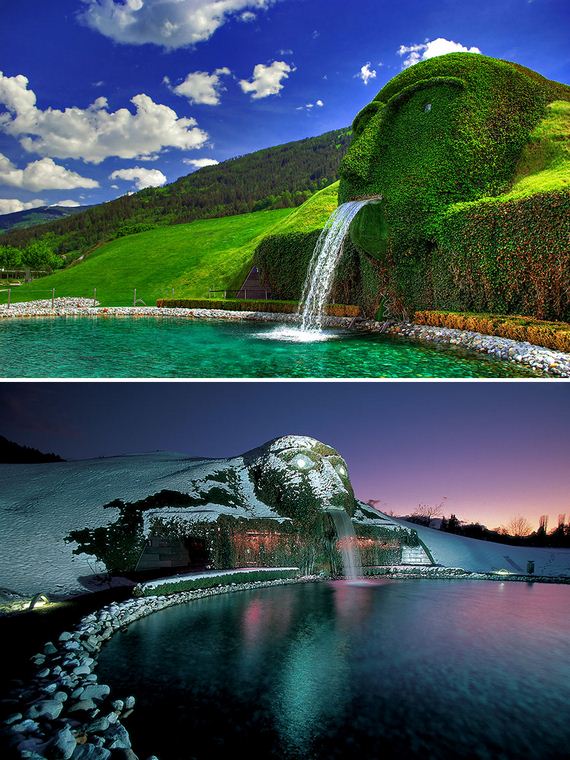 The Swarovski Crystal Worlds (Swarovski Kristallwelten) is a museum, located in Wattens, Austria. The museum was built in 1995 in celebration of the 100th anniversary of the Austria based crystal company Swarovski. The Crystal Worlds Centre is fronted by a grass-covered head, the mouth of which is a fountain. We bet you’ve never seen a fountain like this before! 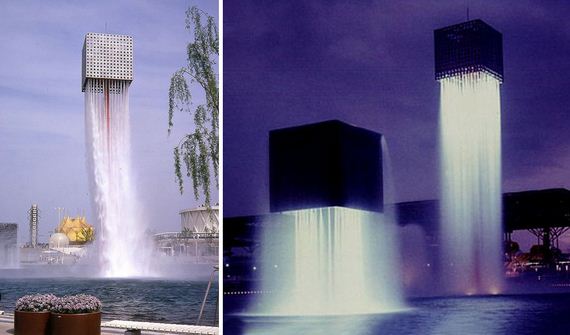 The Nine Floating Fountains are Japanese American artist and landscape architect Isamu Noguchi’s creation for the World Expo held in Osaka, Japan in 1970. These incredible fountains look as if they’re flying, and even though these fountains were built over 40 years ago, they are still as fascinating to behold as they were back then. 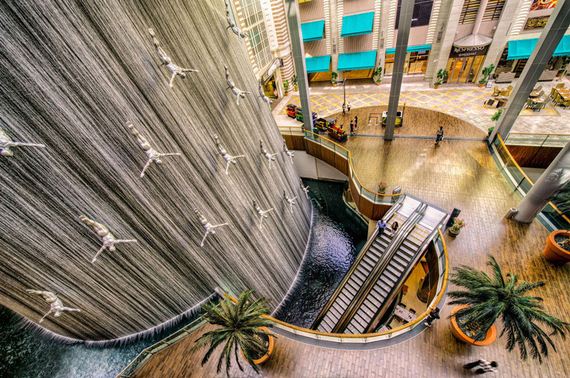 This incredible 24-metre tall water feature can be found in The Dubai Mall in the United Arab Emirates. Adorned with fiberglass sculptures of divers, and traversing all four levels of the indoor shopping precinct, The Waterfall was designed by Singapore-based DPA Architects and was opened in 2009. 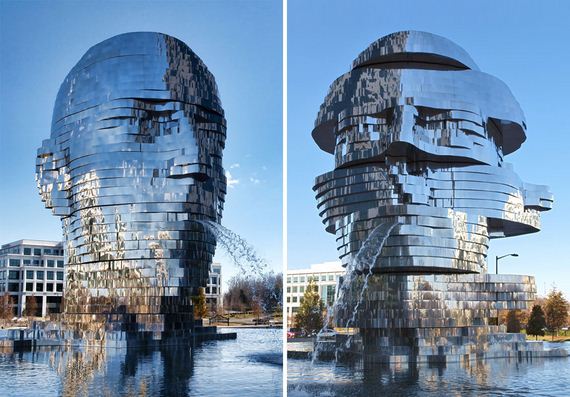 Part sculpture, part fountain, part performance art, Metalmorphosis is the work of Czech sculptor David Černý. It’s 7.6m tall, weighs 14 tons, and consists of over two dozen stainless steel plates that rotate independently and periodically line up to form a massive human head. A raised pool surrounds the sculpture, and when the plates align, water pours out of the head’s mouth. 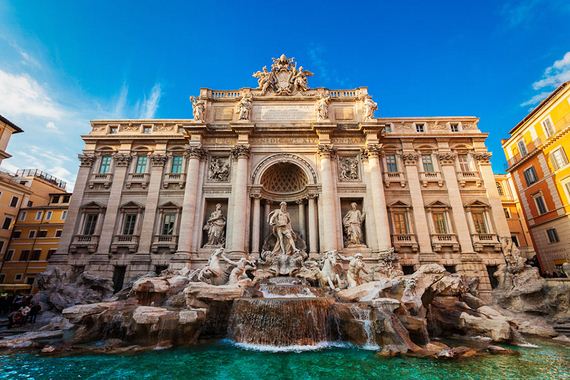 The Trevi Fountain is a fountain in the Trevi district in Rome, Italy, designed by Italian architect Nicola Salvi and completed by Pietro Bracci. Standing 26.3 metres (86 ft) high and 49.15 metres (161.3 ft) wide, it is the largest Baroque fountain in the city and one of the most famous fountains in the world. The fountain has appeared in several notable films, including Federico Fellini’s La Dolce… 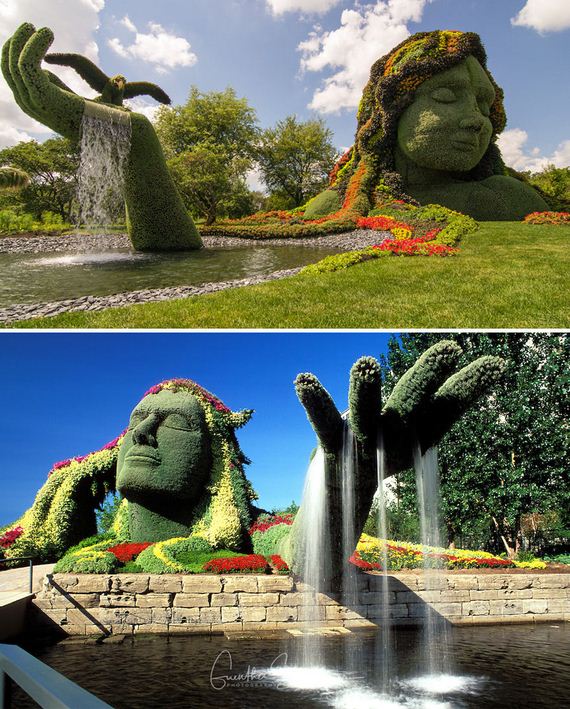 Founded in 1998 by Lise Cormier, Mosaïcultures Internationales de Montréal is a not-for-profit corporation that designs, mounts, and maintains mosaiculture exhibitions, gardens and works. Considered the world’s most prestigious competition of horticultural art, the event attracts some of the most impressive examples of mosaiculture from across the globe. One example is this fountain, named Mother Earth, that appeared in the 2013 exhibition. 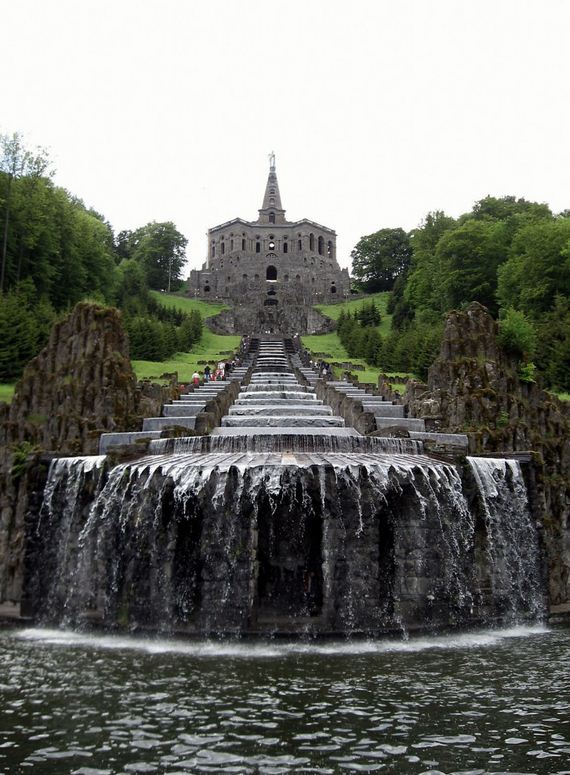 The Water features and Hercules within the Bergpark Wilhelmshöhe is a monumental Baroque and Romantic garden landscape. Water descends from the Giant statue of Hercules, passing a water-wheel-powered organ, various fountains, waterfalls, basins and grottoes.The dramatic water displays were laid out by Landgrave Carl of Hesse-Kassel from 1689 onwards, to display his power as an absolute ruler. He derived his ideas from Italian, French and English examples of… 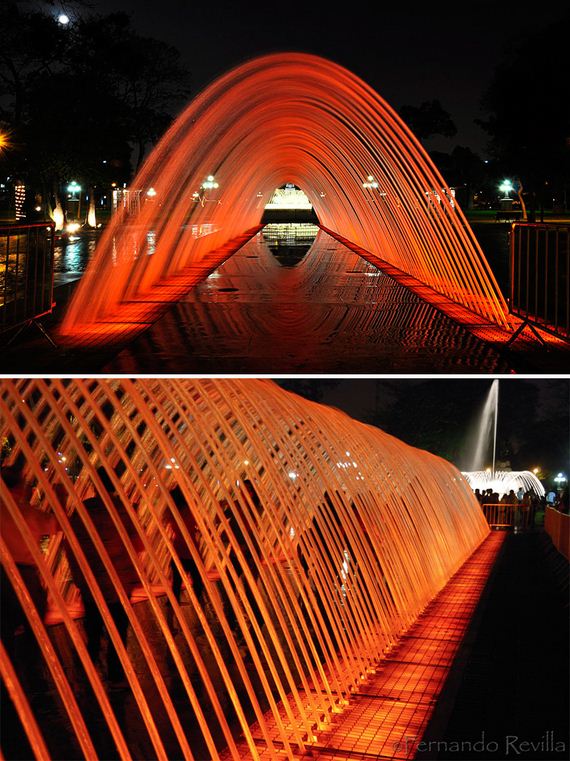 The Túnel de las Sorpresas (Tunnel of Surprises) is a fountain in Lima’s Circuito Mágico del Agua (Magic Water Circuit), opened in 2007 at a cost of $13 million. Built within the Parque de la Reseva, a historic 19-acre (eight hectare) park, the series of 13 illuminated fountains has since proved a successful addition to Lima’s many attractions. Upon its construction, the Magic Water Circuit made it into… 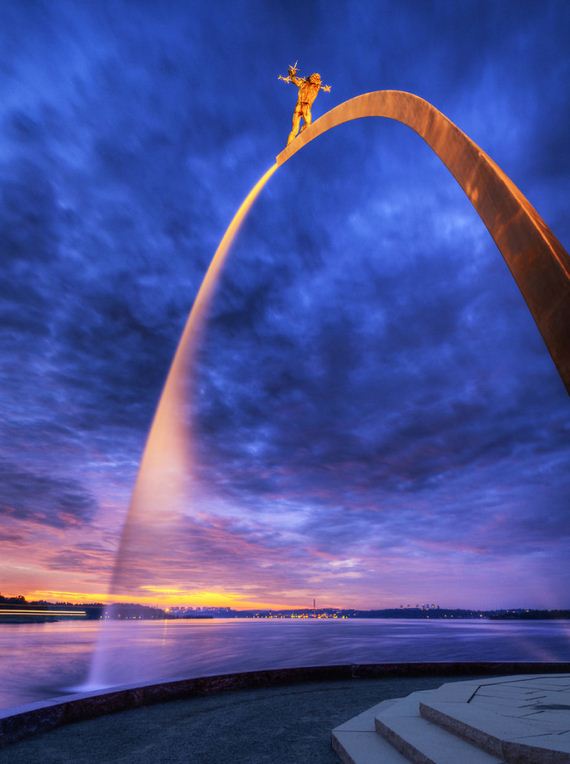 The “God, our Father, on the Rainbow” fountain in Nacka Strand, a suburb on the main waterway approaching central Stockholm, Sweden, was originally designed by Swedish sculptor Carl Milles as a peace monument and to celebrate the founding of the United Nations. Marshall M. Fredericks, American sculptor and assistant to C. Milles for many years, made the statue in full scale from Carl Milles’ This stunning giant ring-shaped fountain is located on highway 71 in Ohio, US. 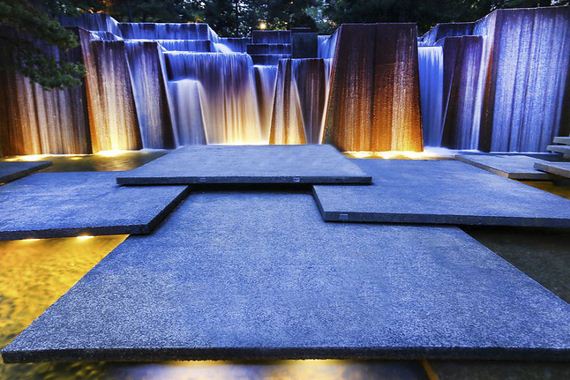 Keller Fountain Park is a city park in downtown Portland, Oregon, which opened in 1970. The central feature of the park is the concrete water fountain. Keller Fountain is often noted as a memorable feature of the public landscape in downtown Portland, and in 1999 was awarded a medallion from the American Society of Landscape Architects. The fountain was designed by Angela Danadjieva using inspiration from waterfalls in… 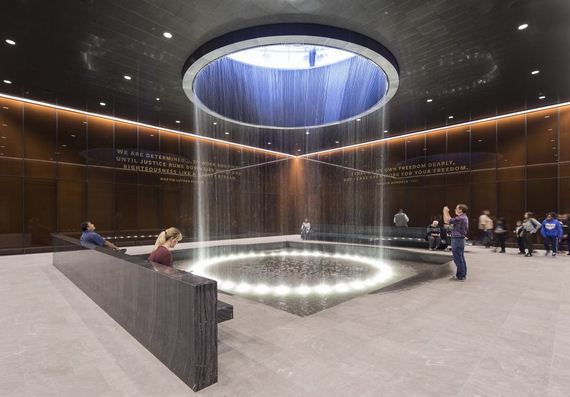 This beautiful portal-like fountain can be found at the Smithsonian National Museum Of African American History & Culture in Washington D.C, USA 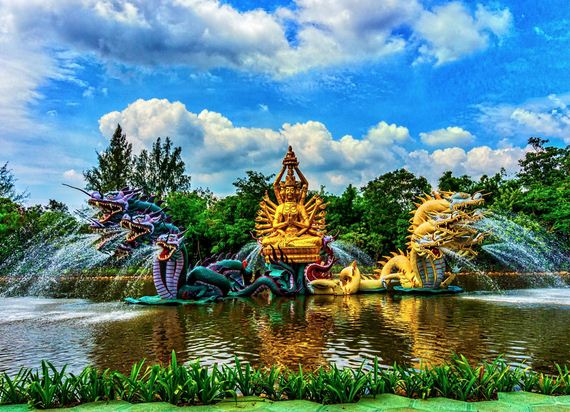 This incredibly ornate fountain can be found in Thailand. It’s situated in a park called Ancient Siam (also known as Ancient City or Mueang Boran). Built in 1963, Ancient Siam is dubbed the world’s largest outdoor museum, and the 320-hectare ‘city’ features 116 structures of Thailand’s famous monuments and architectural attractions. 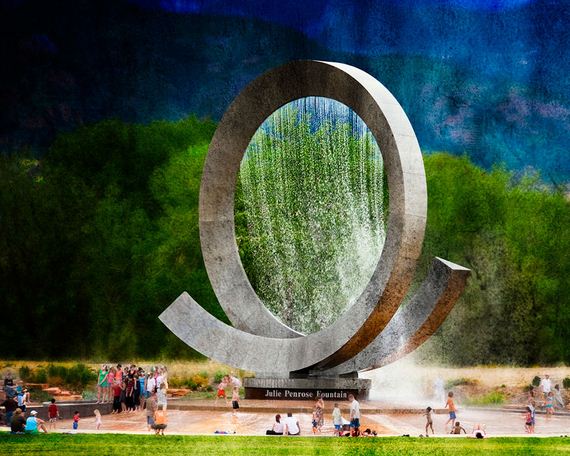 Designed by David Barber and Bill Burgess, The Julie Penrose fountain at America The Beautiful park is an open loop of silvery-colored steel panels outfitted with 366 water jets that line the interior contours of the form. It sits on a hidden turntable so that it’s able to rotate every fifteen minutes. The fountain represents the life-giving movement of water between the atmosphere and the earth.