We humans can become extremely attached to our pets, regardless of their size, shape or character – snakes, dogs, kittens, horses, turtles… and even goldfish. Just ask this guy for example. 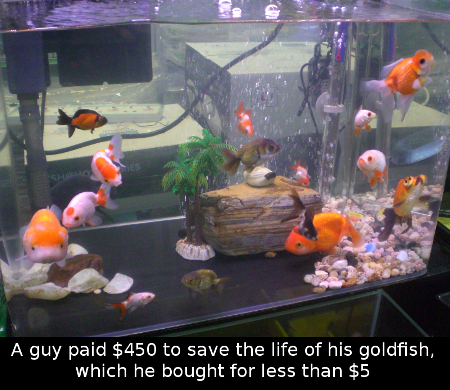 According to oreports, an unnamed man, who is allegedly the boss of a Norfolk-based company, paid £300 (nearly $450) in order to save a goldfish he had bought for less than $5. The fish in question was acting strangely and its owner thought it could be constipated, so he took it to the Toll Barn Veterinary Center in North Walsham, UK. It turned out the fish was indeed constipated and was in serious need of a life-saving operation. Its owner balked at the cost of the surgery was at first going to let his pet die.

However, he quickly changed his mind and realized that he was too attached to it to just let it go. Faye Bethell, a 29 year old vet at the Toll Barn center, conducted the operation on the goldfish. She had to remove two lumps from the fish’s three inch long body, but applying the anaesthetizing agent was the really tricky part.
The fish survived the 50 minute long operation.