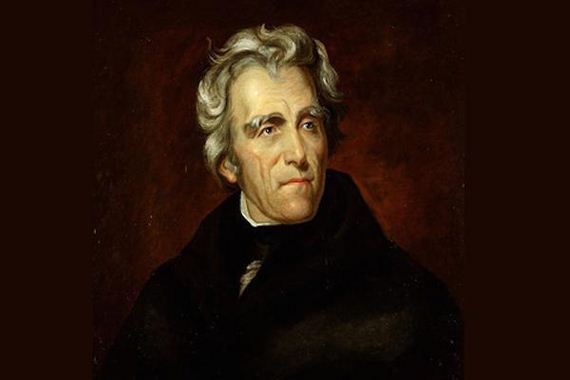 Andrew Jackson was a whiskey-drinking, hell-raising lunatic who was elected President of the United States. He waged a personal war against the British, fought an assassin, threatened to behead John C. Calhoun, and almost destroyed the White House on two separate occasions. He was quoted as saying “I was born for a storm, and a calm does not suit me.” Words of a true hell raiser. Yes he did terrible things to the Native Americans, but that’s a story for another day.

Let’s take a look at some of the highlights from his insane life. 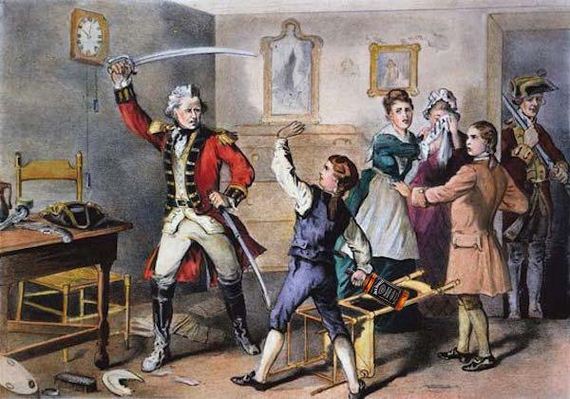 Told the Brits to go fuck themselves
Eager to get his life of ass-kicking and whiskey-drinking off to a start, Jackson enlisted with the local militia at the age of 13 as a courier in the Revolutionary War. When he was eventually captured along with his brother, a British commander ordered little Andrew to clean his boots. Andrew “Balls to the Wall” Jackson refused, enraged the commander, swung his sword at him, and created a large gash on Jackson’s hand and head. These scars would later fuel little Andrew’s wrath against all things English for years to come. 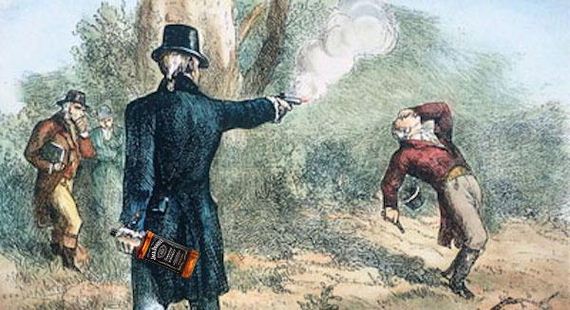 The Duel
By the 1800’s Jackson had the average hobbies of your everyday maniac. When he wasn’t out fighting Native Americans or bathing in the blood of British soldiers, you could find him at the local horse track, drinking and gambling. After a series of escalating events over a bet on a horse race, Jackson challenged a man named Charles Dickinson to a duel. Jackson knew that Dickinson was considered an expert shot and after studying some game film, decided the best strategy would be to let Dickinson quickly fire first, hopefully missing. This would allow Jackson to take as much time as needed to aim. Dickinson did manage to hit Jackson in his chest, but fueled off whiskey and rage, Jackson still managed to calmly aim his gun and hit Dickinson in his own chest, who later died of his wound. Jackson was quoted as saying “If he had shot me through the brain, sir, I should still have killed him.” 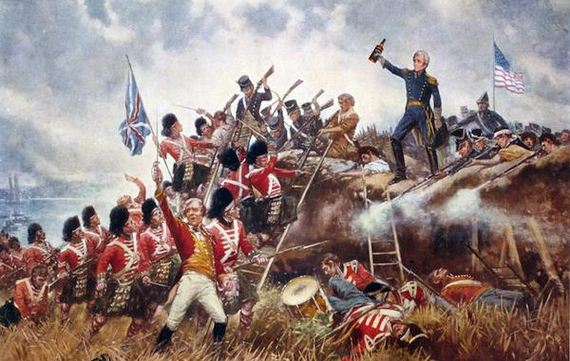 Old Hickory
In December of 1814, the United Kingdom decided to invade Louisiana. What they had not anticipated was finding a lunatic Major General by the name of Andrew Jackson who had been waiting 30 years for a chance to murder them all.Jackson was strict, short-tempered, but his willingness to suffer along side of his men made him extremely popular. They nicknamed him Old Hickory because he was “tough as old hickory wood” on the battlefield. Heavily outgunned and outnumbered, Jackson and his soldiers managed to force the British to withdrawal. As one man put it, “the news of victory came upon the country like a clap of thunder in the clear azure vault of the firmament, and traveled with electromagnetic velocity, throughout the confines of the land.” 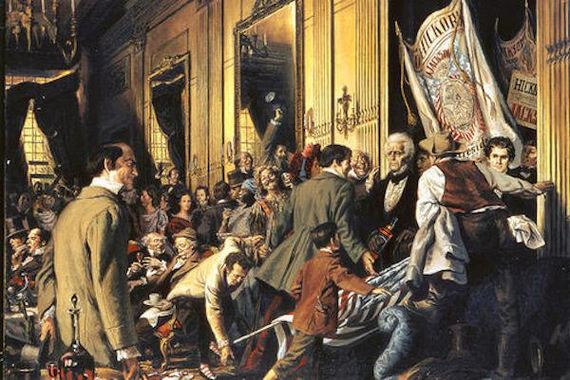 The Inaugural Party
After a hard-fought campaign, newly elected President Jackson was ready to celebrate his inauguration. And what better way than inviting the entire country to party with him in his awesome new mansion? After the ceremony, Jackson returned to the White House to get the festivities started. The party quickly got out of hand as the crowd swelled to over 20,000. The party goers pounded punch spiked with whiskey. They destroyed furniture, china, and even ground cheese into the carpets. It got so crazy that Jackson had to escape through a window. Only after moving all of the whiskey to the front lawn were they able to get the drunk mob to exit the White House. 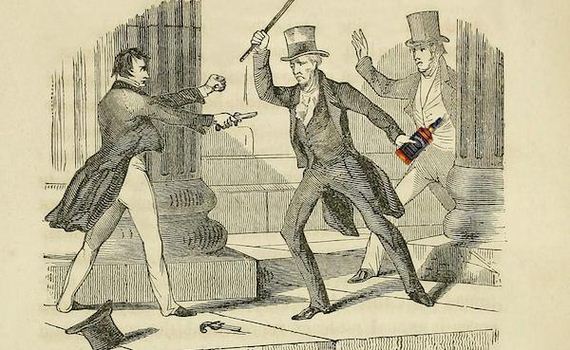 The assassination attempt
On January 30, 1835 Jackson became the first attempt at a Presidential assassination. After attending the funeral of a Congressman, unemployed painter and fully-employed nut job Richard Lawrence pulled two pistols on Jackson. Both pistols misfired, a likelihood that was calculated at 1 in 125,000. Jackson took this opportunity to unleash a can of whoop ass on Lawrence, repeatedly striking him with his cane. If that’s not bad ass enough for you, Davey Crockett was also there and jumped in like a true BFF. Lawrence claimed that he was the deposed King of England, Richard III (who died in 1485) and needed to kill the President. In a weird twist of lunacy and irony, Jackson was once again teaching the British the sweet taste of an Andrew Jackson ass kicking. 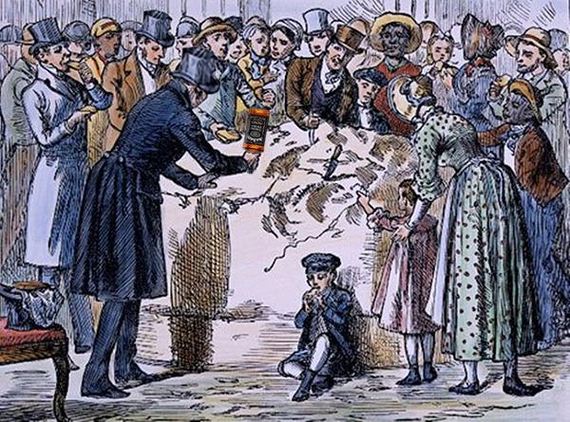 Cheezapalooza 1837
With his term coming to an end and his goal take the White House with him, Jackson decided one last party was in order. A few years earlier a dairy farmer decided to send the President a 1400 lb. wheel of cheese. After receiving the cheese and coming to terms with with the impossibility of eating that much god damn cheese, he left it sit in the foyer for anyone to enjoy. A few years later, the massive chunk of cheese still sat and Jackson decided one last party would be enough to finally defeat it. So in typical Jackson fashion, he threw a cheese rager for over 10,000 people. The cheese fiends destroyed the cheese so fast that it was completely gone within 2 hours. The cheese was gone, but not forgotten, the smell of the cheese could be allegedly smelled several blocks away and one man even described it as “an evil-smelling horror.” The smell was stuck so deep into the walls and carpets that new President Martin Van Buren “had to air the carpet for many days; to take away the curtains and to paint and white-wash before he could get the victory over it.” 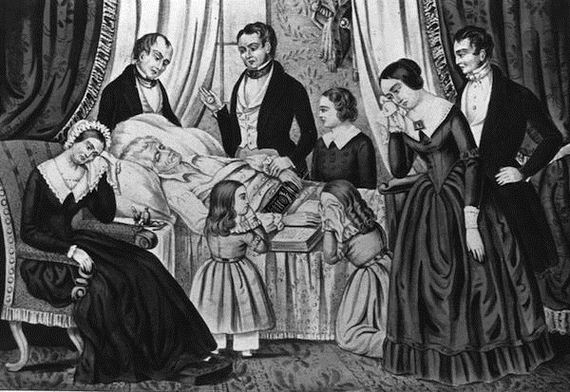 His only regrets
“That I didn’t shoot Henry Clay and I didn’t hang John C. Calhoun”… Holy shit man. 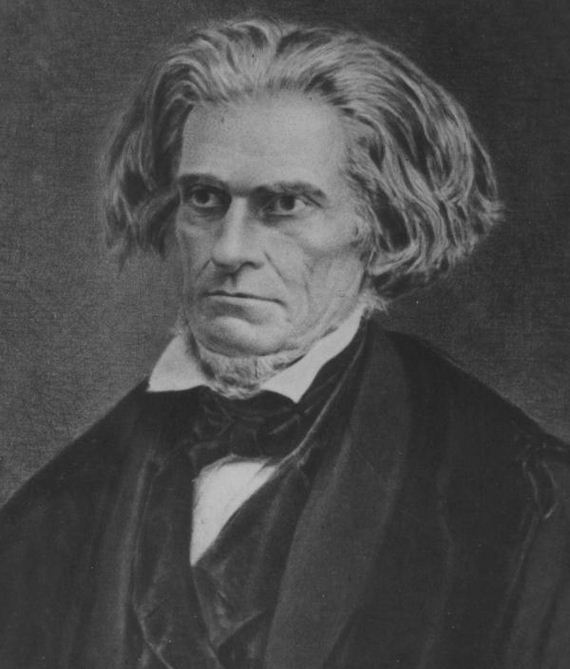 John C. Calhoun
Look at this terrifying motherfucker! He looks like an soul-stealing possessed muppet! No wonder Jackson wanted to hang him.