Zoos are a great way to explore some of the rarest and most fascinating creatures known to mankind. Unfortunately, for animal lovers it’s also one of the worst things to experience – after all, nobody likes to imagine a wild animal trapped in a cage with millions of curious faces to see each day instead of being allowed to roam around freely in the wild. 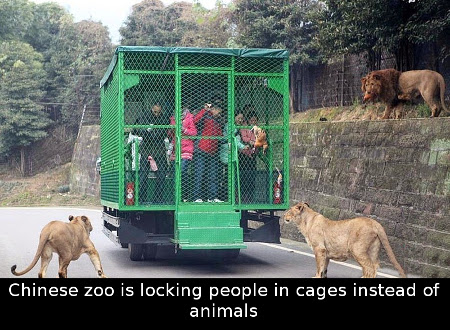 In order to change this, one Chinese zoo is giving its visitors the chance of a lifetime to realize what it would be like for them if somebody trapped them in a cage while tons of strange creatures wander around them. The Lehe Ledu Wildlife Zoo located in Chongqing, China, launched a new kind of visitor policy in December 2014. The visitors are locked in a cage, which is attached to the back of a truck that drives around the zoo. The wild animals, such as lions and tigers, are wander freely around the zoo and often leap onto the trucks, since the zookeepers intentionally strap pieces of raw meat to the vehicles.
The visitors, of course, are completely safe in the cage, even though the animals aren’t leashed or strapped in any way. People love the new program so much that the tickets for the upcoming three months are completely sold out!