You may find it hard to believe, but this hi-tech injection can give your eyes night vision power!

Thanks to this independent team of researchers and biohackers, we might have the power to see in the dark like cats and dogs do. Would this be absolutely ah-mazing? Of course it would! But is our present day technology advanced enough to give us such superhuman powers? It most definitely is! Here’s how these genius people managed to do it. 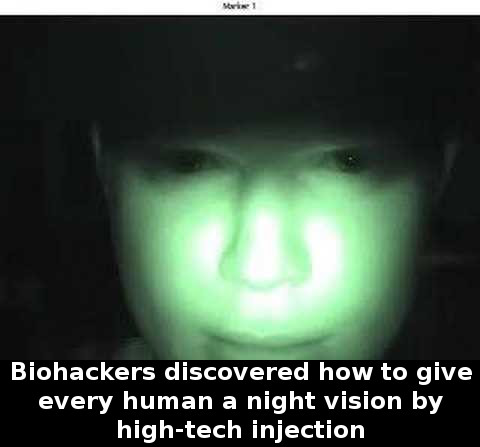 Gabriel Licina, the biochemistry researcher at the center called Science for Masses, decided to let the rest of the biohackers use him as a lab rat. They injected a tiny amount of Chlorin e6 (a chlorophyll analog that’s also known as Ce6) into his eyes. They injected a total of 50 microliters of the substance into Gabriel’s conjunctival sac, which later took it to his retina. Since there is a lot of research material on Ce6 (it’s usually used to treat night blindness and are found in deep-sea fish). The team managed to conduct several tests on Gabriel without threatening in any way his vision or his health. About an hour after the substance was injected into his body, the tests began.

Gabriel’s newly acquired night vision helped him identify objects as close as 10 meters. Shortly after that he managed to identify moving objects and even people from a distance as far as 50 meters. The night vision superpowers proved to be working regardless of the subject’s posture and the background. In fact, the tests worked out so well that Gabriel and his superhuman powers aced it 100%!

Unfortunately, Science for Masses aren’t really qualified scientists, for now. They worked from their garage-based office in California, US and didn’t use any specialized hi-tech equipment. They also didn’t manage to provide any definite numbers regarding their research. Fortunately, the vast research done on Ce6 over the past decades and the team’s successful testing proves that night vision eyedrops with Ce6 could become a possibility in the near future.