Harrison Ford luckily escaped from a plane crash and survived with minor injuries.
The 72-years old actor had a lucky escape when his plane malfunctioned. Fortunately, he was able to maneuver the single-engine aircraft and crash-land it on a golf course. 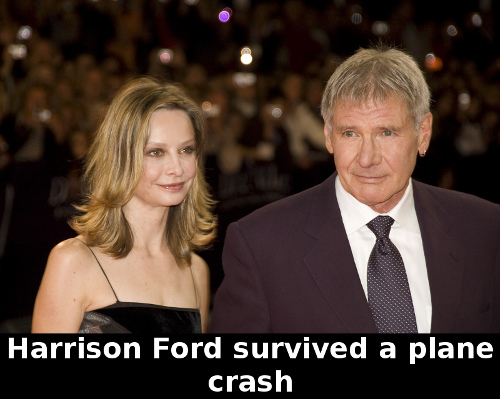 Earlier this March Ford’s small silver and yellow aircraft suffered a malfunction while the actor was flying over Southern California. The actor called the Santa Monica Municipal Airport and requested an emergency landing permission. The airport’s officials granted him permission to land the craft, but Ford didn’t manage to maneuver it and missed the spot. Fortunate, he was able to straighten out the aircraft just enough to crash land it on a nearby golf course just across the initial landing spot destination. The crashed plane was in a rueful condition, and the 72-years-old actor even had to call an emergency ambulance for himself. He was hospitalized in a nearby facility, where the staff members refused to confirm that the patient was indeed Ford.

His own son, however, later took matters to the social media and tweeted that he was in the hospital with his father, who was doing okay. The actor was battered and suffered some mild injuries, but it looks like he’s going to recover fully from the unfortunate crash.

The aircraft was transported to an airplane hangar in Santa Monica, where the reason for the engine’s malfunction will be investigated. Tom Haines, a pilot, who has seen Harrison Ford in action, also spoke out about the accident. He stated that he was impressed by Ford’s skills and that the actor is very safety-conscious when it comes to flying alone.

Official reports state that Ford was the only person in the aircraft when it crashed on the golf course. Pictures of the crash surfaced the social media shortly after residents living near the golf course heard the news.