The 25 year old Taylor Swift crushed the 54 year old Antonio Banderas’ ego to the ground! He may be twice her age, but Swift had no trouble reminding him of it.

Not so long ago Taylor Swift and Antonio Banderas were at the very same event when he spotted her singing on the stage. He was set to give a speech after her performance, so the two of them stumbled across each other on the stairs leading towards the stage. The 54 year old actor was stunned by how lovely Swift looked in person with her “long legs and long hair”. When the two of them came face to face the Blank Space hit maker recognized him and exclaimed his name in awe. Banderas thought it was really cool that the “long legged” Swift knew who he was. 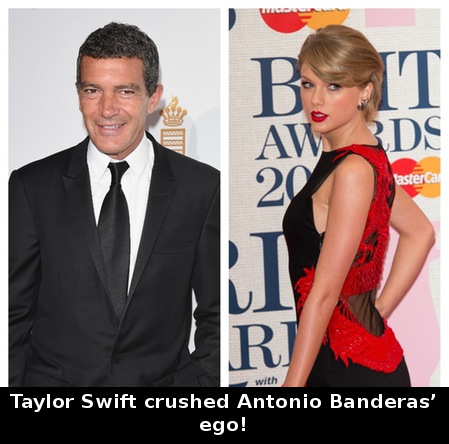 However, she swiftly crushed his ego to the ground with her following remark. The 25 year old Swift told the actor that her granny loves his roles and his movies. The stunned Banderas told the pop singer that he was also pleased to meet her and went about his business. When asked about this case, the actor remembers how he almost cried at Swift’s crushing remark and probably unintended hint about his age.

On the other hand, Swift herself has no problem feeling intimidated when other older stars acknowledge her presence and success. It wasn’t so long ago when Madonna said Swift’s songs were “catchy”. Taylor immediately started fangirling about it and said that she was about to pass out from the overall excitement. When Madonna officially stated that she liked Swift, the 25 year old singer thought it was too good to be true. She also stated she was really scared when she met Madonna in person, because she really wanted the legendary Mage to like her and that the meeting really meant the world to her.