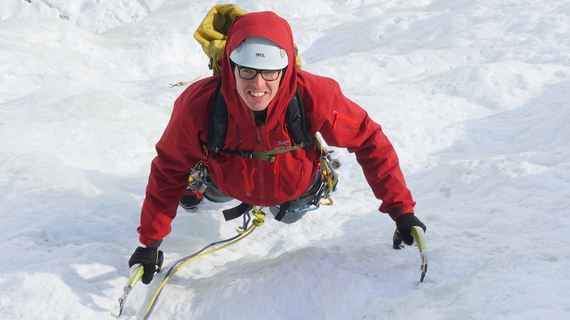 
The main falls at Montmorency are 110m high, taller than Niagara’s pitiful 80m, and longer than the length of a standard rope (about 60m). That means you have to climb the falls in two pitches, stopping to belay halfway up, hanging from ice screws. Add that to the epic setting — the waterfall thundering in the background — and the crowds of tourists milling around at the base, and it’s a spectacular place to spend a weekend climbing.

We rocked up to the falls around noon, having had a leisurely drive up from Montreal. The four of us jumped straight into the deep end, deciding to climb side-by-side pitches on Pillier de Crystal, a pillar of ice that sits off to the left of the main waterfall. Waterfall ice is graded on a scale of 1-7, with 1 being something you could probably climb hands-free, and 7 a burly, overhanging nightmare. The routes we were on are graded 4 to 5, which translates as mostly vertical, with maybe an occasional place to rest. 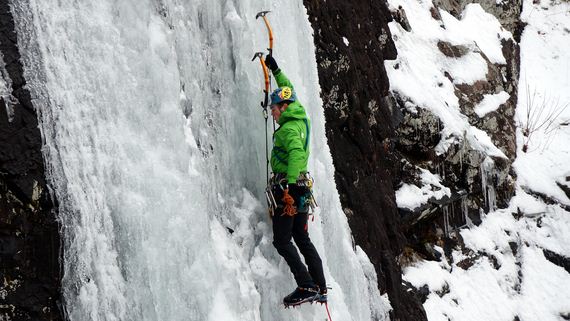 Crampons come next, 14 shiny spikes strapped onto each foot, ready to pierce the ice (or the inside of your leg). To complete the package, you’ve got the crazy-looking ice axes, which get clipped to your harness in case you drop them. All tooled up, you look like some kind of futuristic ice-climbing stormtrooper — great camera fodder for the tourists.

By the time I’d geared up and tied in, I had run out of excuses, so there was nothing left to do but one final check with Julien, my belayer, before getting stuck in.

Unlike rock climbing, where pushing to the limit and falling off when you fail is basically OK, ice climbing is governed by one rule: the leader must not fall. Although the consequences of a fall probably wouldn’t be fatal — you’re still tethered to the cliff by ropes and ice screws, which should stop you from hitting the ground — it’s very easy to break ankles and fracture bones. 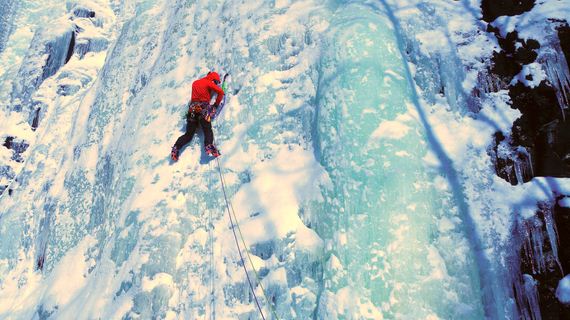 Plus, unlike rock climbing, where the protection is reasonably strong and can be generally trusted, there’s something fundamentally terrifying about trusting your life to a couple of centimetres of ice, especially considering the high forces that can be generated by a climbing fall.

All that considered, there’s one way to lead-climb ice: slowly. It’s a repetitive process: kick, kick, look at your feet. Think about keeping your heels level. Move your hips into the wall, feel the strain come onto your calves, like a Stairmaster from hell. Keep your body still, and tilt your head back, searching for the next axe placement. Find a likely spot, and swing. Swing again. Feel the axe place solidly, the handle quivering as the pick lodges into the ice. Shake your hand out to relieve your burning forearms, and then hold on again, leaning back to place your feet for the thousandth time, kick kick, gaining six inches up the wall with each evolution.

Waterfall ice climbing doesn’t require the gymnastic prowess or insane feats of finger-strength of the rock version: it’s just a very particular and unnatural motion, repeated to perfection. Once you understand the basics, mastering ice really just requires mastering the same basic motion, until you can repeat it hundreds of times up meters on end of ice.

The route I was climbing started out pretty stiff — 15m straight up, before the angle eased back a bit. The climbing was going well — good temperature ice meant the picks were sinking in just so — but the temperature, a balmy -26C, meant my hands were freezing. 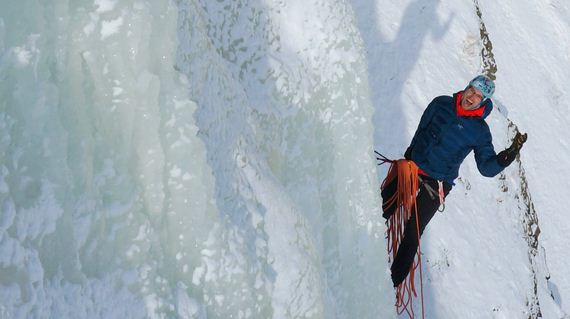 American climbers have a term for the particular brand of pins-and-needles you get from gripping a frozen ice axe: the screaming barfies, so named because you’ll want to simultaneously scream and puke, the pain in your hands is so bad. I added a third one: tears, which froze to my face pretty much straight away. Goddamn Canada.

I placed a couple of ice screws, my hands warmed up a bit, and the rest of my 45-meter pitch went smoothly enough. Because of the popularity of the climb, my pitch finished with a fixed anchor: a bit of 7mm cord strung through a hole in the ice, called an Abalakov after the crazy Russian who invented the technique. Rather than having to build an anchor from scratch, like on most ice climbs, I was able to just clip the Abalakov, shout to my belayer, then stick my hands as far up my armpits as possible. 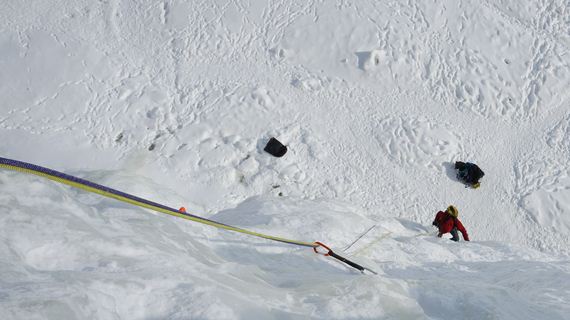 Julien made short work of the first pitch while I belayed and enjoyed the (incredible) view, and pretty soon he was up next to me. I handed over the remaining ice screws, and he psyched up to lead the second, much harder pitch. Where I’d led a section of vertical and less-than-vertical ice, the second kicked back, with big, bulging ice mushrooms creating a murderous overhanging effect.

Julien flew up the first couple meters — he’s a strong rock climber with forearms of steel — but by halfway up, trying to hang on with one arm, and swing an axe with the other was taking a toll. With strength running out, he managed to get a screw in — a fiddly operation at the best of times — and took a (well-earned and sensible) rest before finishing the rest of the pitch with style. 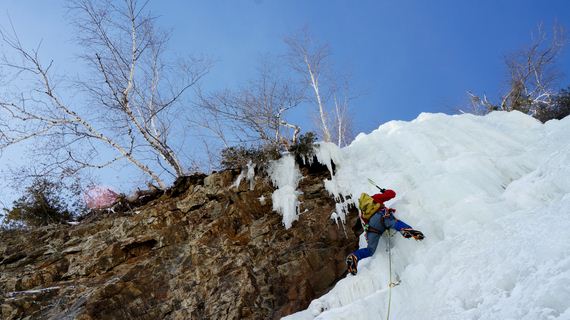 The top-out of the climb is just below a walkway that runs along the top of the cliff. It’s a bizarre situation to be in — you’re hanging from a couple thin nylon slings above a hundred-meter drop, looking out over the frozen St Lawrence river, but a couple of metres above coach tours are sipping coffee and taking selfies. We took a second to organise the ropes, before rappelling back down to the ground, and safety. 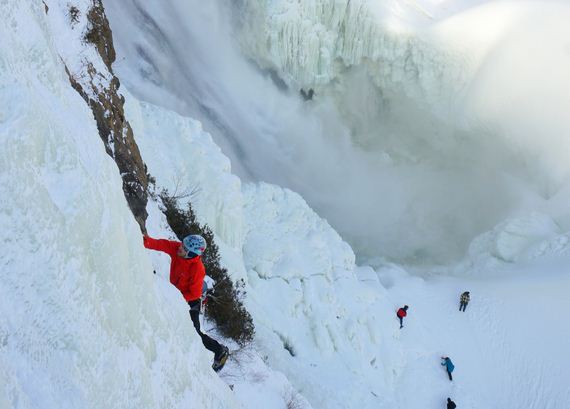 Meanwhile on the next climb over, the other climbing pair on the trip, Nils and Senem, were wrestling with an even stiffer, longer route. To make sure he had enough screws to lead the climb safely, I’d lent Nils a couple of my older ones, but the dated design and blunt teeth didn’t make his life easy. Ice screws are expensive ($US60 a pop), but when you’re run out, with tired arms halfway up a vertical cliff, you’d probably pay triple for a screw that goes into the ice easily. Thanks to their battle, it was turning dark when they topped out, crawling over the railing onto the walkway above. Beers that night tasted damn good.
Want to do it yourself?

You don’t need any experience with rock climbing to try ice climbing — but you will need to know what you’re doing. Either, go with a very experienced friend who can rig up a top-rope on easy climbs for you, or hire a guide. AdventureX in Quebec City run an ice school at Montmorency Falls (on easier climbs!) throughout the winter, and the location and guiding is good. They were climbing next to us all weekend, and it seemed like a solid bunch of guides. Cost is $115 (Canadian) per person per day, including rental of everything apart from boots. Quebec City is also a great place to go visit in its own right. If you go during early February, the Winter Carnival is normally happening. There’s also snowmobiling, snowshoeing, and great skiing up at Le Massif.

If you do hire a guide, make sure you pay attention to the basic technique lesson they will give you. Ice climbing has a very steep learning curve: work out the motions, and you’ll be effortlessly scaling the wall. It’s not about strength — it’s about using your head. The best climbers in the world aren’t big gym freaks: they’re tiny wonders like Ines Papert. 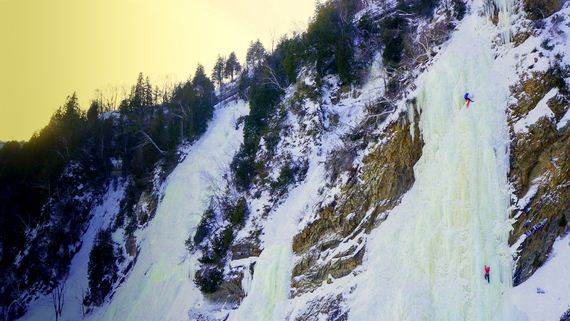 What stuff do I need?

Ice climbing requires a lot of expensive stuff, but fortunately you can rent almost everything. Clothing-wise, you’ll need a big, warm jacket to wear whilst belaying. A big insulated city winter jacket will do just fine. You won’t climb in it — you’ll produce so much heat when you’re climbing that you won’t need it. Instead, have a softshell or hardshell on underneath to protect you from the wind, and the water that drips off the ice.

Underneath, you’ll want to layer effectively for the weather. A wicking baselayer, paired with a fleece or wool jumper (not cotton!) will do the trick. On the bottom, skiing pants, or a long-underwear and softshell pant combo, should work well. A hat to go under your helmet is also important. 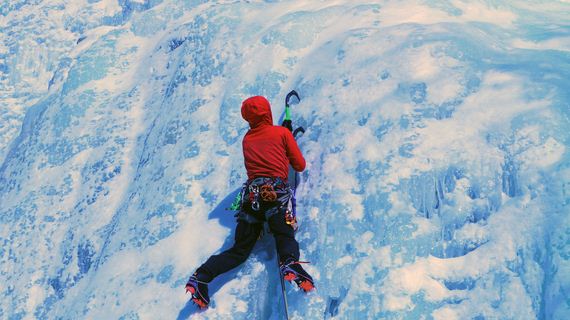 Gloves are one of the hardest things to get right for climbing. Too big, and you’ll have to over-grip the ice axes, pushing all the blood out of your hands, making your hands cold no matter if you’re wearing the biggest unicorn-down mittens. But, if you go climbing in liners, you’ll also freeze. The ideal is a glove with dexterity but warmth. The best bet is normally some kind of lightly-insulated soft-shell, or a lightweight ski glove.

You’ll need a pair of stiff boots to strap crampons to. Normally, this means a mountaineering boot, which is specifically designed to take a crampon. They’re expensive to buy ($US400 and up), but you can rent from gear shops, or normally the guide outfit if you’re going on an organised trip. You want to go up a size from your normal street shoe: you’ll be wearing thick socks, and the boots need to be big enough so that your toes don’t touch the front when you kick into the wall (destroyed toenails, anyone?). Some people will try and ice-climb in ski boots, but unless you have very specific ski-touring boots, don’t. They don’t work and it sucks. 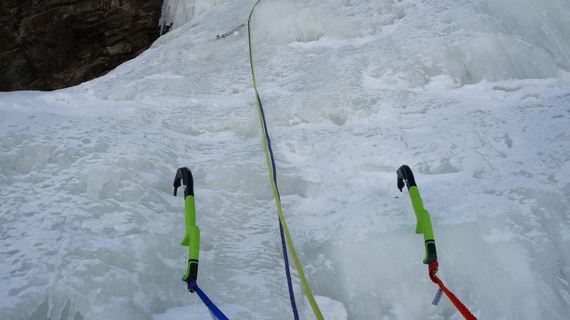 As for climbing-specific gear, you’ll need crampons, ice axes and a harness at a bare minimum. That’s assuming that someone else is bringing a rope and all the technical gear to rig anchors. Again, most ice schools will rent this stuff to you, but if they don’t, try your local outdoor sporting and recreation store.