A man named Ted Williams just had a more exciting week than you. On Monday, he was homeless and panhandling in Columbus, Ohio, carrying a cardboard sign that read I HAVE A GOD-GIVEN GIFT OF VOICE. By Thursday, he was being interviewed on the Today show and fielding job offers from Kraft Foods and the Cleveland Cavaliers. What happened in between, obviously, was YouTube. A journalist from the Columbus Dispatch had filmed Williams beside an off-ramp, doing his version of busking—stepping up to a car window and breaking into a resonant radio-announcer bass, that voice of clean suits, slick hair, and corporate reassurances. The voice just happened to be coming from a homeless man in a camouflage jacket, which gave it a whiff of magic. Viral video begat informal campaign: Here’s a likable, needy person who wasn’t kidding about having a gift, so can we maybe find him a job? 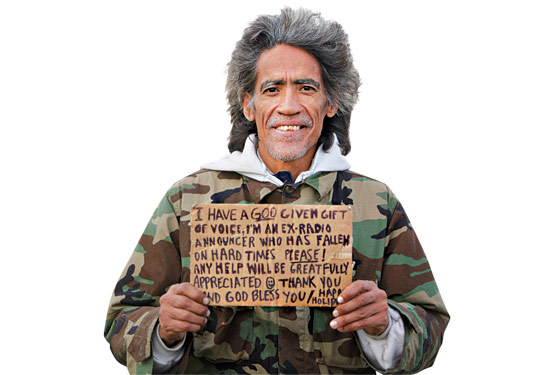 It worked, which has been wonderful to see. And soon enough, Williams was being compared to Scottish singer Susan Boyle—another in a long line of underdogs who opened their mouths and surprised the world by having something lovely come out. We especially love stories of unlikely triumph when there’s a remarkable voice involved. A voice can seem different from a “skill” or “talent”; those words imply learning and practice, and our lives are already full of the boring hard work that stuff implies. A voice like Williams’s seems more innate—a light that will sit inside, through the grimmest or most mundane circumstances, just waiting to shine out. Blessings always beat the grind.

Williams’s story, of course, is more complicated than that. He’d worked in radio in the eighties, before running into problems with alcohol and cocaine. That means this isn’t just a homeless man who turns out to have talent and find success; it’s also a talented, successful man who wound up homeless. (I can’t help comparing this path with that of, say, Glenn Beck, whose dip into radio and drugs, around the same period, spat him out in a slightly different direction.) Williams says he’s been clean for two years now. He’s lucky that his particular ability could be stored safely in his throat and recognized from passing cars—unlike, say, a knack for accounting. And one imagines he’ll require sustained and unmagical friendship, attention, and support to genuinely rebuild his life.

On Today, Williams thanked religion (and “the God of my understanding,” a term from substance-abuse recovery) for helping him get here. He also said he was unlikely to repeat his past mistakes, because he now has gratitude for life. That observation is not exactly a secular one, and it’s a whole lot less fun than Cinderella stories; it might even mean we should be less thrilled by stories of magical gifts and life-changing discoveries, and more appreciative of whatever workaday grind we already have. Sometimes stories of hope are a real buzzkill like that.