Thanks to cutting edge technology this lucky man was fortunate enough to be able to see his wife for the very first time in a whole decade.

Nearly 20 years ago Allen Zderad was diagnosed with Retinitis Pigmentiosa – an eye disease. He lost his sight a decade ago and hasn’t been able to see even his significant other, let alone his grandchildren. 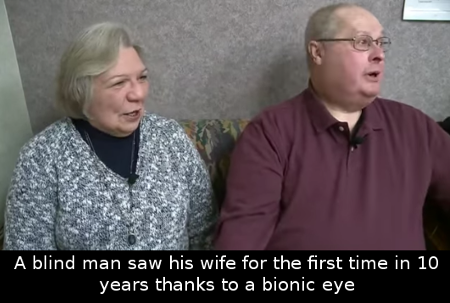 Nowadays the 68 year old man is lucky enough to see his wife again. He was given a bionic eye by the Mayo Clinic in Rochester, Minnesota, as a part of a clinic trial, which helped him see again. Allen doesn’t see as he used to before he lost his sight, but he can still make out forms and shapes thanks to the tech eye.
The man underwent an operation and got a tiny microchip inserted behind his own eye. The chip connects with a pair of special glasses, which bypass Allen’s damaged eye retina and send light wave signals to his optic nerves. This way he can distinguish shapes and forms. Regardless of the fact that the bionic eye can’t really bring back his old vision, Allen is seeing it as a significant improvement to his condition.