Is that even a real thing? Apparently so.

A couple of years ago Roger Tullgren, a heavy metal fan in his early 40s, finally managed to get psychologists to see his love for metal music as an addiction and a mental illness. Tullgren, who’s originally from Sweden, loves his music so much that he has suffered through many work related blues. 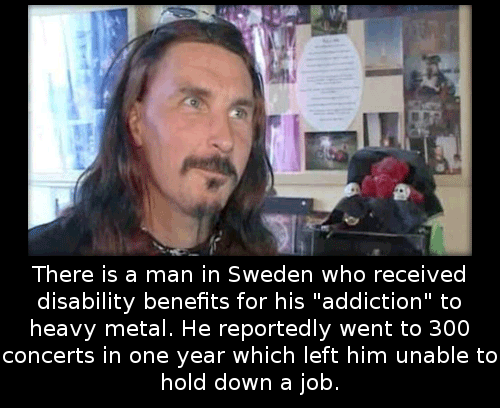 Thanks to the fact that Roger travels a lot and goes to many gigs, he has to be excused for work on numerous occasions just to go see his favorite musicians perform live. Over the past decade he has tried to convince the people around him that his addiction to heavy metal is some sort of a mental illness and now he has finally managed to do so. It took him a total of three psychologists, but he finally proved that his addiction is a sort of a mental handicap. Not only that, but he has managed to receive disability benefits for it. Roger has an official document saying that he needs to show his metalhead side and go to metal concerts without getting any financial sanctions for it.
Fortunately for Roger, his new boss doesn’t mind his addiction as long as he’s doing is work, which is washing dishes. Not only that, but Roger’s employer also lets him go to concerts whenever he wants to.