An unfortunate man got severely injured by his malfunctioning iPhone 5C.

According to official reports, Erik Johnson was left with severe third degree burns thanks to the smartphone’s malfunction. Johnson, who’s a New Yorker living in Long Island, was bending over in order to get his keys when he heard a strange sound coming from his pocket and shortly after that felt like something on his tight was burning. As it turned out, his iPhone 5C had exploded in his pocket. 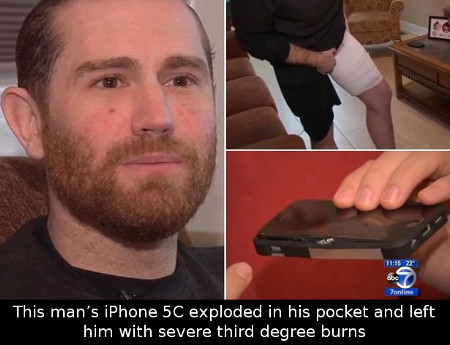 dThe extremely high temperature of the explosion had melted the phone’s screen, its plastic particles and even its metal case. As a result, the leftovers of the mobile had stuck to Johnson’s pocket and shortly after that – to his skin. In a desperate attempt to get the device out of his pocket the man had torn up his pants, but that didn’t help. The phone left severe third degree burns on his thigh and he had to be hospitalized for 10 days, which he spent at a burns unit.
According to Apple, one of the reasons behind the iPhone’s malfunction could have been a wrong charger or a damaged circuit board. Johnson claims he didn’t use a wrong charger and that he’ll be suing Apple.