Two Russian rappers decided to rob a post office in order to fund the recording and releasing of their new album.

Recent reports show that a couple of Russian robbed a local post office just to fund all expenses needed for the recording and releasing of a new music record. 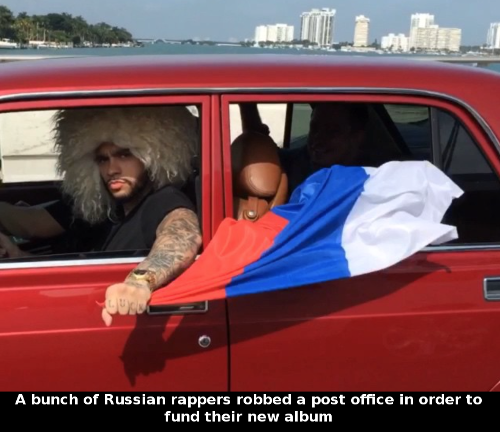 The duo, which resides in a small village in Siberia, organized the robber earlier this March and waited for the day the post was handling the pensioners’ pensions. They stroke with air riffles and masks and managed to steal a total of 250,000 rubles (nearly $4,300) – all in cash. The masked rappers escaped in a van, which was operated by a getaway driver. The three men decided to dump the van shortly after the robbery and to hide in the village’s vegetable patches. Fortunately, one of the post office’s workers alerted the police and the local cops managed to find the robbers the very same day.

The three guys were still hiding in the exact same spot and were easily caught by the police. One of them was identified as Konstantin “Fantomas” Asmolov. The 24-year-old Asmolov is part of a local rap formation called MC KF. He told the police that the rappers needed the post office’s money in order to pay some debts, fund the recording and releasing of their new album and the filming of a music video. The 24-year old’s accomplices’ identities remain in secret. The reports state that the two rappers might end up facing a 7-years long sentence behind bars, although it’s currently unknown what consequences their getaway driver could suffer.

If the rappers had decided to opt for just asking for money for their project from a crowdfunding website like Kickstarter or Indiegogo, they probably would have had less trouble and more success. After all, people turn to such crowdfunding websites for all sorts of reasons.