This has got to be the most jealous woman in the UK – she’s making her husband take a lie detector test every single time he goes out of their home! 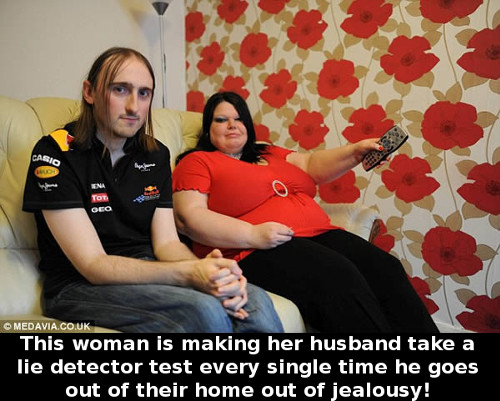 How jealous is too jealous? Apparently, Debbi Wood never asked herself this question. And apparently, her husband doesn’t even care because you’ll never believe the trouble he gets from here each and every single time he tries to leave their home in Leicester, UK.

Steve Wood, the 30-year-old unfortunate husband of the 42-year-old Debbi somehow doesn’t see his wife as jealous. The two of them started dating in the not so distant 2011. They were introduced to each other through a mutual friend and married shortly after falling in love. Nowadays that love has become so blind for both of them that Debbi can’t grasp the idea that her husband is fateful and Steve can’t realize that his wife is extremely jealous. Debbi isn’t only making Steve take the lie detector test whenever he decides to go out. In fact, he has to endure so much more! Debbi is checking his e-mail account, his phone and his bank records multiple times each day just to make sure that he’s not cheating on her. In fact, Debbi has even forbidden her husband from watching other women on TV or even looking at pictures on the Internet and in magazines!

The UK couple endures all of this because Debbi’s condition is allegedly a real medical condition. Experts claim that Debbie isn’t the most jealous woman in the UK for no reason. She reportedly has Othello Syndrome – a disorder, which makes her super jealous of her partner and makes her believe he’s been unfaithful to her, even though there is no evidence that he’s cheating.
In other words, it’s still safe to say that this woman is simply the most jealous person in the whole UK.

Isn’t it weird that even though it has been proven time and time again that most of the...