If married, you probably love your other half, or at least like them enough that if you were to win the lottery, you’d tell them, and put the money into a shared bank account. 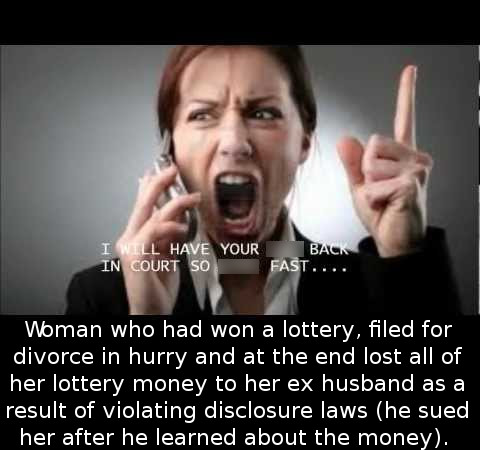 Well, Thomas Rossi seemed like the perfect husband for 25 years. Him and his wife never had marriage counselling, never doubted their relationship and they seemed to be particularly close. When Denise Rossi, his ex-wife suddenly wanted a quick divorce, it was strange.

On Monday, her secret was revealed. An LA court judge specialising in family rulings, has said that this strongly violated disclosure laws for assets and so the judge has awarded the lottery winnings to her ex-husband. All $1.3 million!

It was decided that the ex-wife was either doing this as fraud or just acting as malice, and he the judge made his decision from the deposition where Denise said that she had hidden her winnings as she didn’t want her ex-husband getting any of it!

“Moral of story: It pays to be honest from the beginning.”

When Denner announced his ruling in court, it is said that tears were coming form the husband’s eyes and Denise was shocked with the result, and is currently deciding her next move.

This is described as karma, and it is hoped that people will now think again before hiding their assets when going through these proceedings.

Denise’s and Thomas’s views on how their marriage was going are apparently very different, and she said that they’d been unhappy for a number of years, and this was just the prefect opportunity. She said that when her and 5 co-workers got the ticket together, shared the $6.6 million.

Denise took the divorce papers to her husband’s shop, and in 1998 he had to declare bankruptcy and had to work in a chain photo store part time.

It was two years after their divorce that a letter from a company who pays the lump sums for these types of winnings. He had no idea about any lottery payments and so he contacted the California State Lottery Commission. They then confirmed that in July, his ex-wife had won the lotto.

This is when an injunction was filed by Thomas, and the matter was taken further. If Denise had said that she’d won the money, she’d have to have given half of it to her husband, due to state laws. Even her plea that the money was a gift from a friend did not make the judge believe her, hence the winnings going to Thomas.

Her lawyer said that if she’d disclosed it at the time, there would’ve been a possibility of keeping the money by claiming it’s separate property. However, the judge was not happy she kept this secret from everyone, and so served out this big penalty to her.