The people with naturally ginger hair form only 2 % of the world’s population. The hair colour is a result of а mutated gene that derived from Northern Europe more than a couple of millenniums ago.

Nowadays, people have a broader availability of potential partners, so the odds of two gingers marrying and having little gingers of their own are slimming. Usually, one red-haired parent carries enough of the gene in order to have red-haired children but two, obviously, increase the chances significantly. 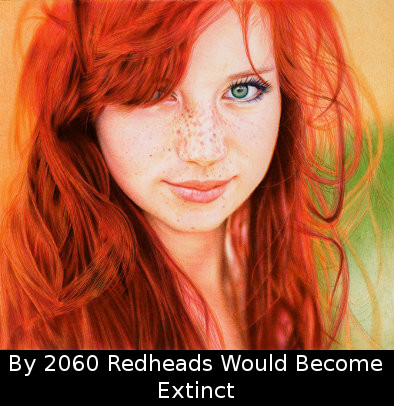 Probably Scotland will be the last place where there are redheads as 40 % of the population carry the gene and 13 % actually have that kind of hair.

Some scientists claim gingers would be extinct as soon as 2060, while others argue that the gene could return after being dormant for generations.

National Geographic researchers state that hundreds of years ago, having the gene used to be beneficial for improving the body’s capacity of producing vitamin D from sunlight. However, today’s redheads are more likely to suffer from skin cancer and have increased levels of temperature-related pain.