Frances Bean Cobain has told the public that despite her father’s music, she doesn’t actually like it, and that she much prefers Oasis.

Of course, it isn’t all of her late father’s music that she doesn’t like, and she does admit that ‘Territorial Pissings’ and ‘And Dumb’ are both some of her favourites. She even says that she is emotionally attached to ‘And Dumb’ as it’s a very close perception of Kurt, whilst he was on and off drugs, and whilst he thought it was not appropriate for him to be the ‘voice of a generation’. 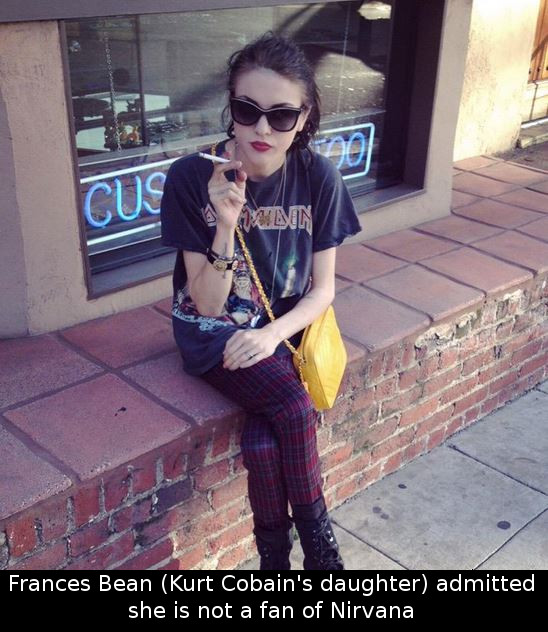 Frances didn’t know much at all of her father’s actual life, as she was only 20 months of age, when her father committed suicide, but she has also understood the reasons behind him doing this.

It’s said that he had reached his peak, and he thought that without him, everyone would be happier. Despite this, Frances is clearly upset with the fact that she has not had a father, and she says that it would’ve been an amazing thing to have a father.

Frances also is fully aware of her father and mother’s relationship, and despite being a relationship fix at the time, she does not think that this is right. However, she is sure that both her mother and father did love her a lot.


Her life will never be one without her father though, as she hears about him everywhere she goes, and she knows that what he did, was with the best possible intentions.

He inspired people to put him on a pedestal, to become St. Kurt. He became even bigger after he died than he was when he was alive. You don’t think it could have gotten any bigger. But it did.