Teenagers in South Korea are forbidden from playing online games after midnight. In order for the government to make sure they won’t be doing any gaming after midnight, they are monitoring the teens through their social security number.

Back in 2010 the Korean Ministry of Culture, Sports and Tourism passed a new law regarding teenagers in South Korea. 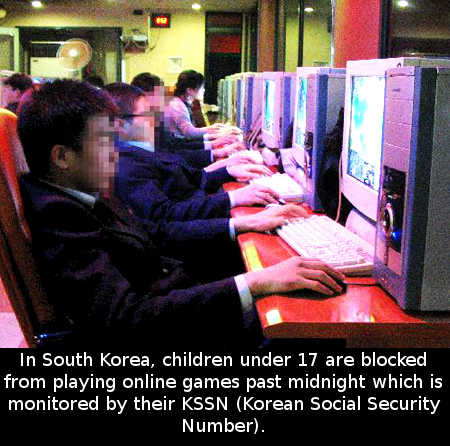 According to the new law, all teens aged 16 and under were forbidden from playing any online games after midnight. Since kids proved to be fonder of online games instead of offline, mobile or console games, the government decided to take actions and restrict them from staying in front of the computer at night instead of going to bed. They found a way to make sure the teens won’t play in between 12 AM and 6 AM. How is this possible? Well, the South Korean government started monitoring the teens’ national ID number (their official social security number). Since most websites for online gaming required the number in order to allow the user to log in, the government passed this law and obliged all websites to automatically log out all underage teenagers at midnight.

The law was aimed to prevent teenagers from becoming addicted to online games, since they apparently liked them more than console games, mobile games and offline games. However, many teenagers started searching for loopholes like asking their parents for their ID numbers in order to pose as them on the Internet or just straightforwardly taking their ID numbers without permission.

Fortunately, back in late 2014 there was a proposal to lift some of the restrictions of this law, since it apparently doesn’t do the trick against single-minded addicted gamers, who will stop at nothing just to play. The proposal is said to go into effect later this year.