As it turns out, Emma Watson has some magic running in her blood after all. The 24 year old actress, who was shot to stardom for portraying the iconic witch Hermione Granger in the Harry Potter movies, is related to a real life witch, who lived in the 16th century. 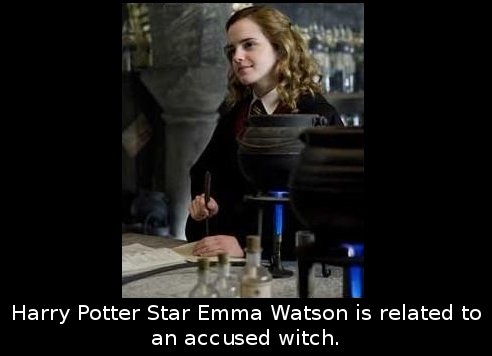 Watson, who was born in France, but grew up in Oxfordshire, UK, was related to Joan Playle, a woman, accused of being a witch in the 16th century. Playle, who resided in Essex (about 100 miles from the area, in which Emma grew up), was one of the nearly 200 people, who were accused of practicing witchcraft during Queen Elizabeth I’s reign. Strangely enough, Playle was never burnt at a stake, but was only excommunicated from the church. She was Emma’s 14 times great-cousin. Anastasia Tyler, who’s a genealogist, traced back Emma’s family tree and found out the actress’ great-great-great-grandma was also part of the Playle family, which has reportedly been residing in Essex ever since the 1500s.
Watson isn’t the only celebrity, who has ancestors accused of witchcraft. Sarah Jessica Parker was also related to a woman, who was once burned at the Salem witch hunt trials.