For once Kanye West isn’t making headlines about his infamous (and extremely long) rants. Earlier this January Westbury Road and Roc Nation (Rihanna and Jay Z’s labels) released a pop song called FourFiveSeconds. The song is the result between Rihanna’s, Kanye West’s and Sir Paul McCartney’s collaboration.
The three musicians performed the song together on the 8th of February this year during the 57th Annual Grammy Awards. 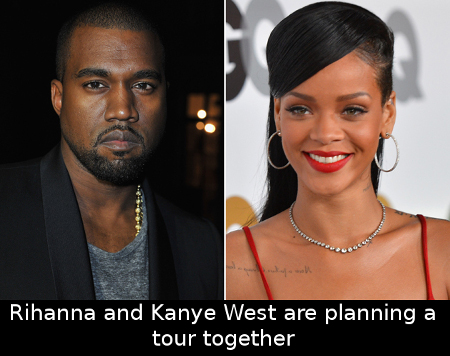 Live Nation posted on their website an announcement, according to which Rihanna and Kanye were going to tour together this summer. The announcement stated that tickets would go up for sale on the 5th of March. However, the news was deleted from the label’s website shortly after it was posted. And yet, it wasn’t deleted before fans of Kanye and Rihanna were able to see it. Thus, the rumor that the two of them were going on tour together sparked immediately on the web. Unfortunately, there’s no confirmation (or denial) from the musicians’ spokespeople yet.
If Rihanna and West indeed go on a tour together, it will definitely be something outrageous. They’d have to bring tons and tons of trucks just to store their wardrobes!