Back in summer 2009 Brian Acton, the founder of WhatsApp, decided to look for another big mogul to work for after he left Yahoo. Spending a total of 11 years at Yahoo he thought that it would be easy to start working for another hugely successful company. Unfortunately, he was wrong. For a single summer he got rejected both by Twitter and Facebook. 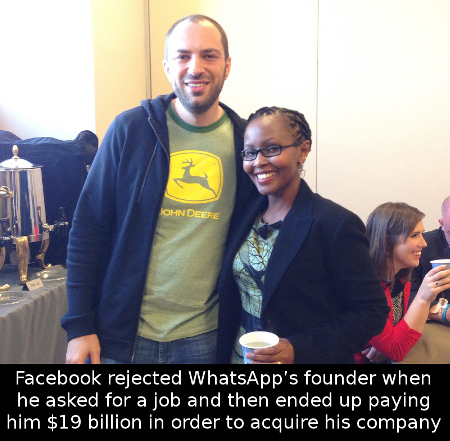 Acton took his sorrows to his Twitter account, but all he really did say about the two networking websites, who had just rejected him, was that it was “OK” and that it would have been nice to work for them. He also stated that he was “looking forward towards his next adventure”. Instead of venturing towards another big mogul’s HR department, he got in touch with one of his ex-colleagues from Yahoo – Jan Koum. Koum and Acton started working on a new project, which later became WhatsApp.
On the 19th of February 2014 Facebook acquired WhatsApp for 19 billion. That’s right – they paid $19,000,000,000 to the man they rejected several years ago! It surely must have felt good – for Acton at least. The deal was reported as the most expensive one Facebook has ever made!
Smooth move, Mark Zuckerberg, smooth move.