Johnny Depp and Leonardo DiCaprio are two of the most famous Hollywood heartthrobs of our time. And while the two of them respect each other nowadays, back when Leonardo was a teenager Depp used to torture him in various ways. 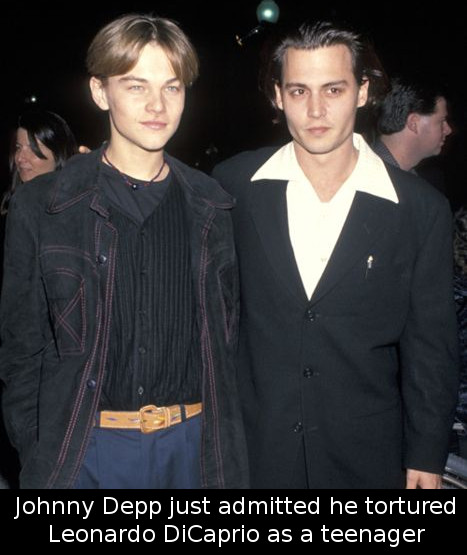 These two have an 11 year age gap and when they worked together on What’s Eating Gilbert Grape back in the early 1990s – a project, which is considered as Leonardo’s break-through role, Depp used to torture the fun out of the then-teenaged DiCaprio.

So, what did Depp do exactly? Well, he didn’t torture his younger co-star in the literal sense, but he admitted that he was quite cruel to the 19 year old DiCaprio back in the days. Somehow Depp was going through a tough time accepting acting gigs and he did it just to pay his bills, so he wasn’t thrilled to act at all. Leonardo, on the other hand, was excited and was filled with the energy of a teenager, while talking about video games, working hard to get into character, arriving on set early, wanting to take a drag on Depp’s cigarette while his mother wasn’t looking, and so on. So, instead of helping out the young actor and making his experience easier, Depp decided to torture the teenager with nasty comments, unwelcoming behavior and tons of bad attitude.

Eventually, the two of them finished working on What’s Eating Gilbert Grape and both of them went on to become the acclaimed actors they are nowadays. Depp shared that he respects DiCaprio now, but he felt like he needed to take everything out on Leo when they were younger.

Leonardo’s latest project, The Revenant, came out in January, while Depp currently has 3 projects coming out this year – Yoga Hosers, Alice Through The Looking Glass, and London Fields.