A 5 year old boy found that there was a hidden camera in the toilet of one of Starbucks’ coffee shops in Lancaster, California, US. 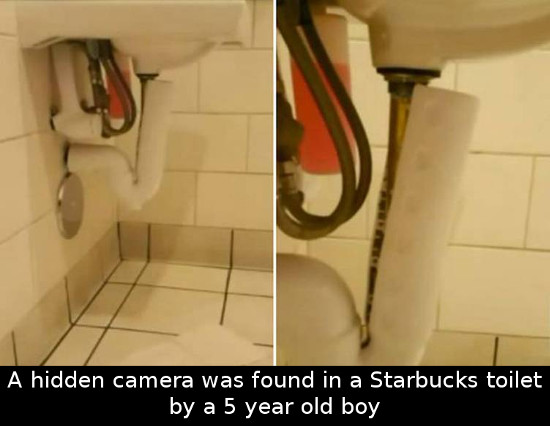 he boy, whose name remains anonymous, found the hidden device when he was visiting Starbucks with his mom.

The woman and her son visited the restroom and the boy used the toilet first. That’s when he spotted that there was something wrong with the sink’s pipes. His mom, whose name also remains hidden from the media, saw that her son was staring at the sink in a perplexed way. She immediately asked the boy what was wrong and he asked her if she knew why there was a phone under the sink. As it turned out, the phone’s camera had been secretly filming the clients, who were using the coffee shop’s toilet from its hiding place in between the pipes. It had been balanced under there with the help of some paper towers. The woman took immediate measures and told the staff what her son had found. She also contacted the media and a local TV channel did a report on the outrageous case. The woman shared that she had no idea if the phone had been streaming the video footage online, but that she was indeed furious over the fact that the recording had violated hers and her 5 year old son’s privacy.

Starbucks, of course, hurried to issue an apology regarding the case. The coffee shop chain stated that they had taken “swift action” after they learned about the phone and alerted the nearest Sheriff’s Department. Starbucks’ spokespeople also shared that they have been highly disturbed by these events, since they take great responsibility into offering safety and privacy not only to their staff members, but also to their customers.
Well, so much for privacy!