Max Eden from Cheshire, England used to weighed 301 lb. The boy had to leave school at 16 in order to help in his family’s deli. Max was never much of a sports person but once he started working in the shop, food turned into a big temptation for him. By the time he turned 18 Max’s weight had reached 301 lb. The teenager wasn’t happy with his weight but a couple of things in particular made him set his mind to do something about it. Once Max was at a concert and people complained that he was blocking their view. Also, the fact that he was often mistaken for his mom’s husband or a 40-something-year-old guy really disturbed the boy. 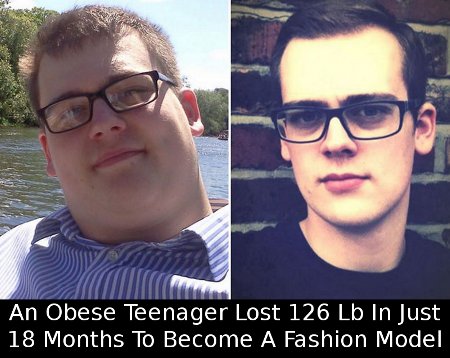 Max started running on a regular basis, mostly at night, as people would often shout insults at him. After he dropped a few stones Max joined a gym and just 18 months after he decided to change his life the results were there : his weight was under 175 lb. What is more, Max was feeling fitter and healthier than ever before.

Today, Max works as a TV presenter and a part-time fashion model. He is really happy with his new life and wants to motivate other people who are also dealing with weight problems. Max states that he is the living proof that it is never too late to change your life and everything is possible if you really put your mind to it.