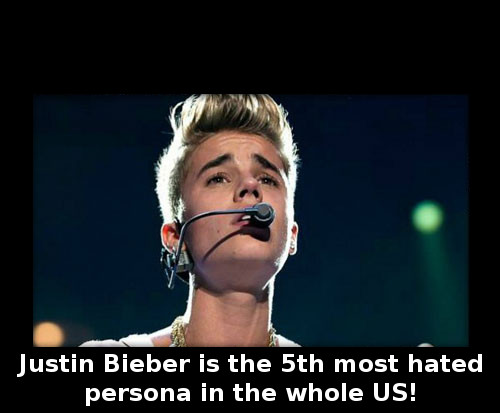 Just when you think Justin Bieber would manage to stay out of headlines for a change, he does it again! And this time the reason for this bad publicity isn’t even surprising, let alone shocking!

Bieber once used to be a teen heartthrob for 14 year old girls from all around the globe. Nowadays he’s famous only for his misdeeds. Just by looking at his actions from the past couple of years you might grasp why tons of people voted for him in an E-Score poll for the most hated people in the US. He threw eggs at his neighbor’s house, he framed his friends for using drugs instead of him, he drove under the influence of alcohol, he stirred up tons of trouble in his neighborhoods, he drove recklessly over the speed limit in a quiet area with lots of children, he acted upon grave racism – these are just some of the things that transformed him from a rising pop star to a troubled punk, who nearly got deported from the US and almost got his visa revoked. His forms of teenage rebelliousness made everyone hate him beyond measure.

And E-Score’s poll for most hated people in America proves that. Bieber scored a total of 86% votes on the poll. A total of 1,100 participants were surveyed and they claimed Bieber as the 5th most hated persona in the whole US. He topped the list of murderers, fraudsters and drug abusers. The only people, who America hates more than Justin Bieber are O. J. Simpson, Conrad Murray, Bernie Madoff, and Donald Sterling. The latter one aced the top spot on the list of the most hated people in the US with a total of 92% votes.