Kwame Kilpatrick, former Detroit mayor, was indicted on December 10 2010. This time, new corruption charges. A federal prosecutor called it “a pattern of extortion, bribery and fraud,” by some of the city’s most important members. Bernard Kilpatrick, Kwame’s father, was also indicted, as well as, a contractor named Bobby Ferguson. Kilpatricks assistant, Derrick Miller and the chief of the Detroit Water Department, Victor Mercado were also indicted. The list of allegations was tremendous. Among 38 charges were 13 fraudulent schemes in giving contracts to Detroits water department where $1,000,000 were pocketed. 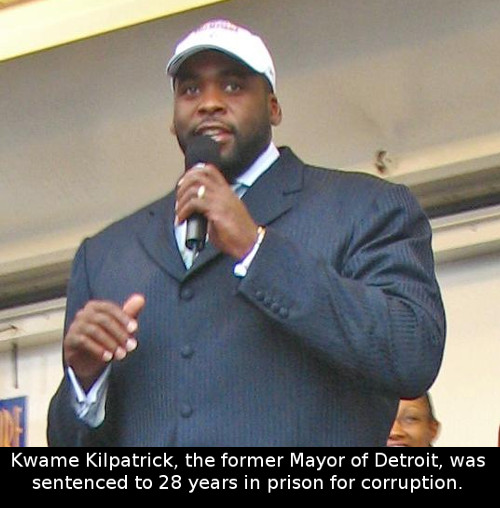 January 10, 2011 Kwame was arraigned. The indictment was 89 pages long. A proposed trial date was set for January 2012 by federal prosecuting attorneys but the attorneys of the defense got this pushed back until summer of 2012.
Opening statements started on September 21 2012. A large amount of witnesses were present due to the prosecutors. They gave some damaging testimony in the case. While the trial was I’m progress, Mercado took a plea deal.

The defense costed taxpayers over a million dollars. on March 11, 2013 Kwame was found guilty of two dozen counts. Included in these charges were racketeering, mail fraud, extortion, and tax evasion.

He was sentenced to 28 years in prison. His earliest release date , if he is on good behavior, will be August 1, 2037.