Home » Did you know that Russia has a vast diamond field containing “trillions of carats”, enough to supply …

Did you know that Russia is actually packed with diamonds? The country has “trillions of carats” stored in its so called diamond fields.

Somewhere around 35.7 million years ago a big asteroid hit the Earth and formed a large crater on its surface. This crater is now located in an isolated northern region of Russia and is known as the Popigai crater. It’s actually the 4th largest crater on the planet formed by an asteroid impact. However, this isn’t the most interesting thing about the Popigai crater’s history. 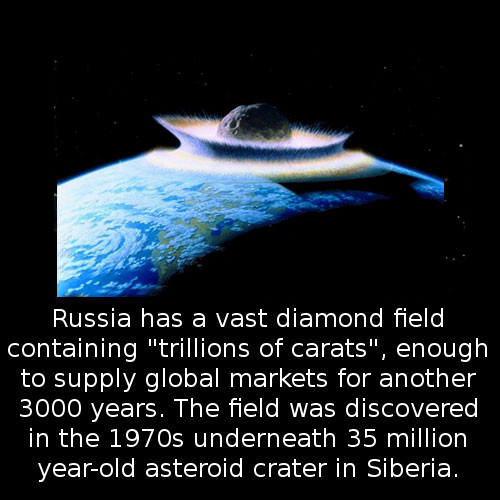 You might find it hard to believe, but it’s actually the home of tons of diamonds! That’s right, Russia has a massive amount of diamonds measured as “trillions of carats” stored in this very same crater. As it turns out, there used to be a large diamond seam on the crater’s spot, but the crashed asteroid shattered it to countless tiny particles. According to the head of the Novosibirsk Institute of Geology and Mineralogy, Nikolai Pokhilenko, the diamonds in the crater are actually harder than average diamonds found elsewhere on our planet. Thus, they are ideal for scientific and industrial purposes. The diamond field was found back in the 1970s, but the Soviet Union decided not to make the extraordinary finding public and keep the info to itself.

For many decades the notorious De Beers used to be the most prominent diamond manufacturer in the world with a total of 80% of the total supply. However, Russia and Australia managed to break into the market in 2000 and De Beers’ shares dropped to nearly 45%.

Nevertheless, Russia can’t really use their diamond field stacked with “trillions of carats”. As it turns out, the mine in the crater is actually closed down due to lethal falling yields. In fact, even helicopters aren’t allowed to fly over the crater, because there’s a possibility that the downward air flow could suck them in.