You probably didn’t. There’s no doubt that Sylvester Stallone is a talented actor. Born in the family of a hairdresser and an astrologer, he learned what it meant to work for his pay from an early age. Stallone found himself homeless at the age of 24 and after spending 3 nights sleeping on a bus station in New York, he managed to land a role in an adult movie – his very first acting gig. 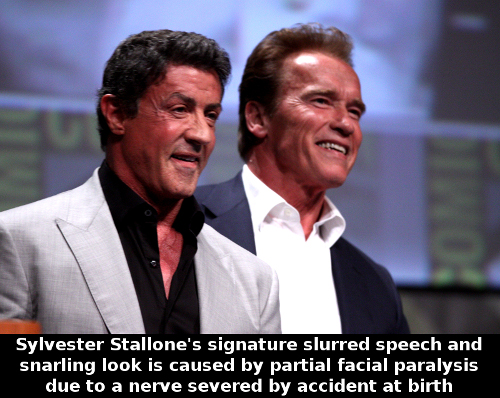 Six years after that he was shot to stardom by portraying the main character in the very first installment of the Rocky franchise. Ever since then countless fans from all around the world have been waiting in lines just to see his face on the big screen. His signature slightly slurred speech and famous snarling look are recognized by billions of people worldwide.

However, there’s a reason behind the way he looks and talks. The 68 year old actor was born with a partial facial paralysis. An accidental misuse of the forceps, which were used during his birth, severed a nerve in the newborn Sylvester and left him with a partially paralyzed chin, tongue and lips. His mild disability has turned into his signature trademark.