John Carpenter, an economist from Connecticut, US, became the very first person to win the top prize of $1 million in the popular international game show, Who Wants to Be a Millionaire. 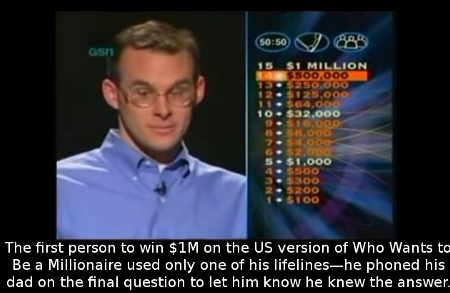 Carpenter entered the show as a competitor on the 19th of November 1999. He managed to ace all the questions without using any of the three lifelines up until the final one. When Regis Philbin, the original host of the US version of the show, asked the million dollar question, Carpenter finally decided he was going to use a lifeline. He used Call-A-Friend in order to call his dad. However, John didn’t want to ask his father which US president had appeared on the TV series Laugh-In, but wanted to tell him that he was going to win the $1 million, because he already knew the answer!

Less than a minute after the call was made Carpenter indeed received the top prize.