If you had to work on New Year’s Eve and your job involved keeping an eye on drunken revelers, would you turn up for work or skip your shift, claiming illness? The police officers in Rome, Italy, surely did so. 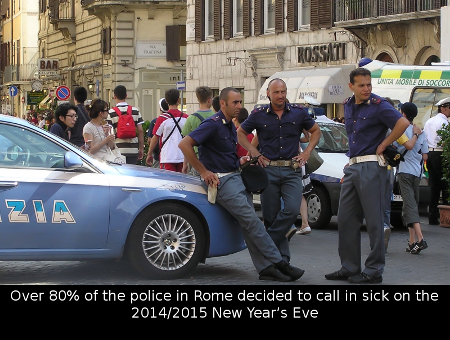 Over 600,000 people welcomed in 2015 on the streets of Rome. Police presence would be expected to be high to deal with the sheer volume of people, but on New Year’s Eve more than 80% of the local policemen didn’t show up for work. However, it turns out that the police didn’t skip work on the big day in order to get drunk and join the party. They were reportedly making a stand about the poor payment and conditions their jobs offer, such as the fact that their force is severely understaffed.

Regardless of the true motives, the Italian Prime Minister stated on his Twitter that there will be a shake-up of public sector employment rules in 2015