Earlier this winter rumors started flying around the Internet that Disney’s own good girl turned back Miley Cyrus was secretly dating none other, but Arnold Schwarzenegger’s own son Patrick. Miley and Patrick’s relationship has been out in the open for quite some time now and by the looks of it, Patrick’s parents aren’t happy about it. At all! 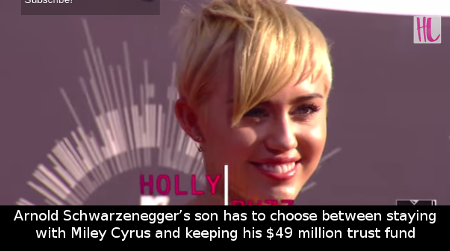 According to official reports, his parents – Maria Shriver and Arnie Schwarzenegger – both believe that Miley is a bad influence on their beloved son. Not only that, but they’re also convinced that she would lead him down a dangerous path and break his heart. However, Patrick seems to think otherwise. That’s probably the reason why his parents took measures into their own hands and decided to pull out the big guns. According to some anonymous insiders, Patrick’s mom and dad have threatened to take away his lucrative trust fund. The 21 year old Schwarzenegger is set to inherit the fund at his 25th birthday. However, his parents have the power to take away the money at any time they wish.
According to the source, there is $49 million awaiting in that fund, and it’s up to Patrick to make his choice – a relationship with Miley or all those millions.