Iga Jasica, a 19 year old girl from Katowice, Poland, is making multinational headlines for the strange phenomenon, which occurred during her brain surgery. 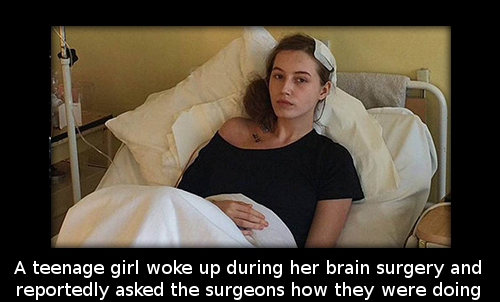 Iga was on the surgical table and the doctors were trying to remove the deadly cancerous growth she had in her skull, when the girl woke up mid-surgery. The surgeons had just opened up her skull in order to remove the cancer, when somehow Iga managed to regain her consciousness. Fortunately, she wasn’t capable of feeling any pain, so she just asked the doctors how they were doing. The surgeons were extremely baffled by this phenomenon and Iga’s bravery during the surgery and they kept talking to the girl – mostly about cats, which she adores. When questioned by the media later, the medics suggested that she might have awoken from the anaesthesia thanks to a neuron in her brain, which must have been triggered during the surgery. They also admitted it was absolutely unusual for a sedated patient to wake up during a surgery, especially when their skull is still open.

When Iga was asked about her own point of view after the surgery, she explained that she couldn’t remember much from it, but that she was feeling great after the procedure.