The newest craze in India isn’t just taking a selfie, it’s taking a selfie with the Indian Prime minister – Narendra Modi.As part of the promotional campaign for the State Assembly elections in the country, BJP (Bharatiya Janata Party), one of the two major political parties, has installed a total of 2,500 photo booths in public space such as malls and markets in Delhi, India. 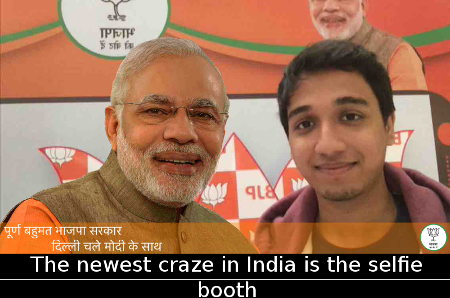 What’s special about these photo booths is that they’re actually selfie booths, which offer the citizens of Delhi a chance of a lifetime – to take a selfie with the Prime Minister. Of course, Modi isn’t present in the booths – only his holographic image is there, ready to appear on the final picture. The booths are actually small tents equipped with iPhones mounted on tripods. They snap the selfies of hundreds of volunteers with the Indian Prime minister.
By the looks of it, the 2,500 booths are really taking over social media. Regardless of their age or gender, multitudes of Delhi residents are lining up in order to take a selfie with Modi. The hashtags #ModiMagic and #SELFIEwithMODI are rapidly gaining popularity on Twitter.