This guy paid for one extremely expensive photocopy.Paul Barrington, a 38 year old citizen of Ilfracombe, Devon, UK, was recently diagnosed with a lung disease which forced him to quit his surfing hobby and his day job in child care. 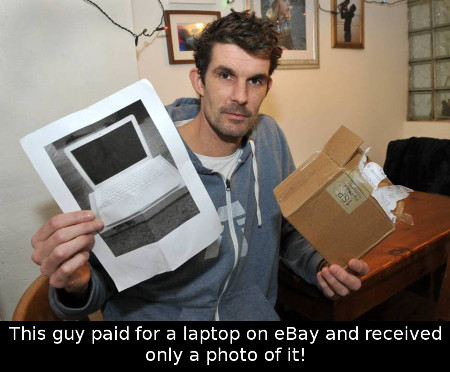 Paul was planning on becoming a wedding DJ, but he needed a computer to start his business. He ordered a second hand Apple MacBook from eBay and won the online auction for £300 ($460 in USD) after selling his very last surfing board. The deal seemed too good to be true, since the actual price of a MacBook is 5 times what Paul had to pay. As it turned out, he didn’t receive the product he had paid for but an extremely light and small package which contained a photocopy of the laptop. The black and white picture devastated Paul, who had given up everything only to face such a huge setback.
The good news is that after he contacted eBay’s officials, he received a full refund. According to official reports, the website sees merchandise fraud as something serious, so they decided to give Paul his money back. The reports also state that there are over 149 million active eBay users from all over the planet, which list more than 800 million products at any given moment.