Home » Did you know that Dolphins will communicate with one another over a telephone, and appear to…

Dolphins are among the most curious mammals on our planet. In many ways they are just like us, human beings – they form groups, they play with one another, they team up against a greater threat and they communicate with each other through a large variety of sounds and gestures. 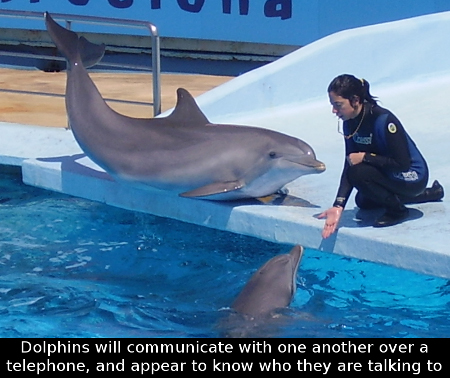 Not only that, but they don’t use their brains just for basic instincts. In fact, dolphins are so smart that if you have them talk on the phone, they can recognize the dolphin on the other end of the line.
And that’s exactly what a team of researchers did. They separated two dolphins – a mom and her young son – in two water tanks, which were connected via an audio link. As it turned out, not only did the two mammals communicate, but their whistles, clicks, squeaks and squawks proved that they recognized one another over the “telephone”.
Unfortunately, humankind is far from understanding dolphin language. Although there are some ways to tell when a dolphin is stating he/she is far more superior to the others or when a mammal is warning his group for a nearby threat, nobody can tell for sure what the dolphin language and gestures mean at any given moment.