Home » Did you know that the 1965 “Slumber Party Barbie” came with a scale permanently set to 110 lbs, and a diet book with just one…

A Mattel’s Barbie doll from the 1960s is making headlines all over the web these days. And it’s for all the wrong reasons.
Ever since Mattel was founded in the 1940s, their signature Barbie dolls have been inspiring young girls to live up their dreams of becoming astronauts, businesswomen, fashion designers and so on. 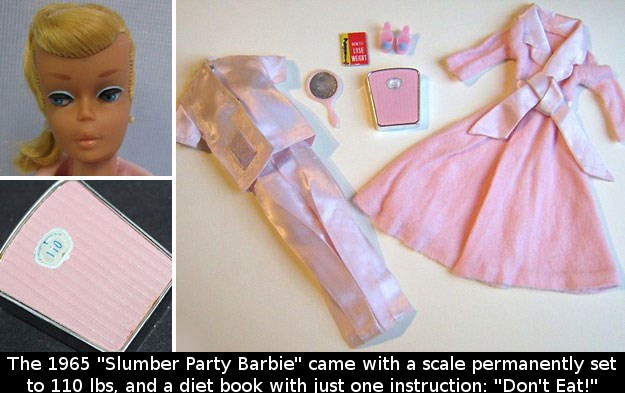 However, one particular vintage Barbie apparently told them to stop eating in order to accomplish the ideal weight of 110lbs (50kg). The doll in question is from the Slumber Party Barbie series from 1965. Slumber Party Barbie’s variety of pink accessories includes a set of bathroom scales, which are constantly set on 110lbs. The doll also comes with a bright yellow and red handbook on how to lose weight. It consists of only one single rule – don’t eat.
The doll must have been reviewed by the design team at Mattel, because the company released another version of the doll – this time without the scales – less than 2 years after the original release of Slumber Party Barbie. Nowadays the modern version of the doll doesn’t carry diet books and is focused on reading, skin care and drinking hot cocoa.