An unnamed truck driver from Alabama, US, caused such a serious traffic jam and road accident on an interstate road that the police had to close down a section of the highway for several hours.

Official reports show that the man was a self-employed 57 year old driver. He was driving his tractor trailer down Interstate 20/59 in Alabama when he felt the need to deal with a loose tooth. 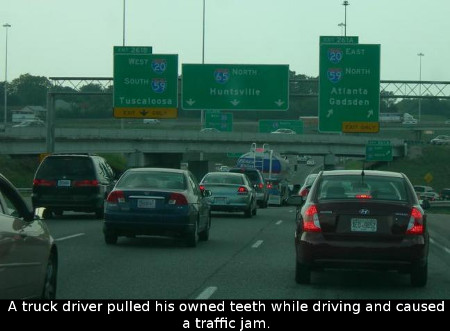 The man took his hands off the wheel and used them to pull out his tooth. As a result, he lost control of his vehicle, left the main road and went straight towards a nearby ditch. Fortunately, he wasn’t seriously injured. When state officials arrived at the scene, they found the man’s tooth in his pocket. Unfortunately, the police had to close down one of the sections of the interstate road and open up a lane that would help vehicles maneuver away from the “crash area”. The closing of the road caused a serious traffic jam, which reportedly lasted for several hours.
The accident took place around 10:30 PM on the 25th of January and according to the reports, the road was still closed during the next morning.