Let’s face it – no kid wants to go through the humiliation of being driven to school by his parents. In this case, however, Ashley and Danny Mead are the coolest kids in school exactly because their dad is driving them to the institution. 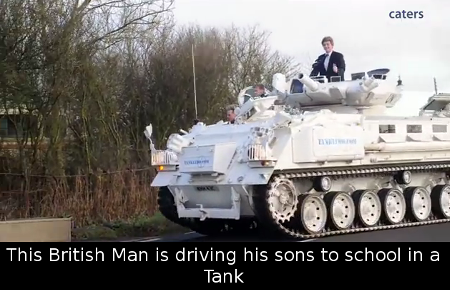 Nick Mead, a huge military enthusiast and tank collector, 53 year old Brit and father of two, bought his very first military tank 20 years ago. Nowadays Nick is the proud owner of a driving events company named Tanks A Lot and over 120 tanks. They are used mostly for funerals or somebody’s pompous wedding, but some of them are even used in movie making. Not only are his tanks road legal, but he also uses one of them to drive his 13 and 16 year old sons to school each morning. The 53 year old man, who lives in Helmdon Northamptonshire, UK, says he finds all of the attention funny, but that his boys are probably a bit bored of the £2 million ($3.12 million in USD) tank collection, since they’ve been driving the vehicles on the family’s farm ever since they were 8 years old!